NASA satellite imagery shows a massive plume of pollutants streaming off the island of Hawaii from a new wave of volcanic eruptions.

The Kīlauea volcano has been erupting constantly since the 1980s, but a series of major eruptions in the last couple weeks sent plumes of pollutants, including sulfur dioxide (SO2), into the air as well as flaming rocks and lava.

University of Alabama climate scientist Roy Spencer noted a massive 1,300-mile cloud of SO2 coming from Kīlauea. The volcano began erupting in early May when new lava vents opened up. By May 17, the mountain violently erupted, sending ash and other matter into the atmosphere. (RELATED: A Lethal, Toxic Haze Is Drifting Over Hawaii)

“Carried by the northeasterly trade winds, the SO2 cloud can be discerned in true-color imagery extending about 1,300 miles downstream,” Spencer wrote on his blog on the satellite image taken on May 21.

“The eruption site is indicated by the red dot, where the satellite picks up a hot anomaly in its infrared channels,” Spencer wrote. 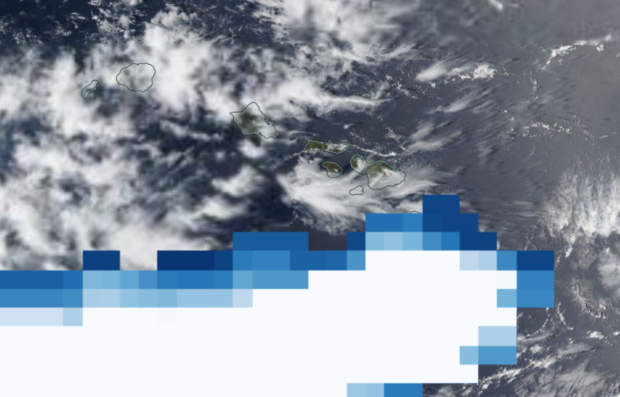