North Korea is expected to demolish its Punggye-ri nuclear test site any day now, potentially ending an era of illicit nuclear testing at the site buried deep in the mountains.

Located in North Hamgyong Province in the northeastern part of the country, the Punggye-ri test site is North Korea’s only known nuclear testing facility. The North conducted a total of six underground nuclear tests in 2006, 2009, 2013, January 2016, September 2016, and September 2017. The most recent test involved a two-stage thermonuclear bomb (hydrogen bomb) that produced an explosive yield far greater than anything the North Korean regime has previously tested.

The explosion physically reshaped the mountain above, triggered earthquakes, and caused the collapse of a blast cavity, leading some observers to conclude that North Korea’s nuclear test site was damaged beyond repair and could no longer be used for nuclear testing. Others, however, argue that even if the North Portal, the main tunnel, sustained serious damage, the South and West portals are still available for additional weapons testing. (RELATED: Kim Jong Un’s Nuclear Test Site May Be Down But Not Out)

Some analysts in South Korea and China have suggested that further testing could cause a critical collapse, potentially causing an environmental disaster by spreading radioactive fallout across Northeast Asia. 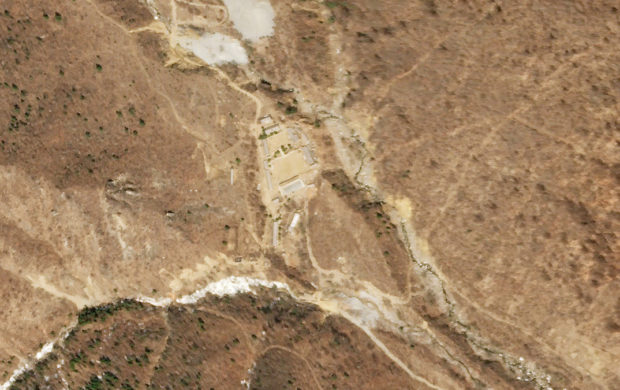 North Korea first announced the closure of its nuclear test site on April 20.

“The nuclear test and the intercontinental ballistic missile test will be discontinued,” state media reported at the time, adding that the “nuclear test center will be discarded in order to ensure the transparency of the suspension of the nuclear test.” (RELATED: North Korea Says It Will Close A Major Nuclear Weapons Testing Site)

Pyongyang revealed plans to demolish the site completely on May 12, with state media reporting that the North intended to destroy the tunnels and seal all of the entrances. (RELATED: North Korea Reveals New Details About The Dismantling Of Its Nuclear Test Site)

Journalists from five countries are presently in North Korea to witness the site’s destruction. Experts and international investigators are noticeably absent from the event, which could indicate that the move is a stunt rather than a gesture of goodwill, as it has been interpreted in Washington and Seoul. (RELATED: North Korea Wants To Let The World Watch It Dismantle Its Nuclear Test Site, Seoul Says)

Notably, the decision to close the nuclear test site follows several declarations from North Korean leadership claiming that North Korea has completed the state nuclear force, which could suggest that the North believes that additional testing is no longer necessary.

North Korea put on a similar show for foreign journalists in the summer of 2008, when it demolished a cooling tower at the Yongbyon Reactor, limiting its ability to produce plutonium. Not only was it later revealed that North Korea was secretly enriching uranium, but the North also conducted its second nuclear test just one year after that landmark event, which followed one of many broken nuclear deals with North Korea.

Some Korea watchers suspect that North Korea may be trying to bury evidence of its activities and hide information about its nuclear program. Others argue that the theory is being overhyped.

The decision to dismantle the Punggye-ri nuclear test site is a welcome move nonetheless.

Satellite imagery from recent weeks suggests that North Korea has been taking steps — “technical measures” — to prepare for the demolition of the nuclear testing site. Many of the above-ground structures have been removed. (RELATED: North Korea Is Already Tearing Apart Its Nuclear Test Site, Satellite Images Show)

Depending on how North Korea demolishes the nuclear test site, experts and intelligence analysts estimate that the North could restart test within a matter of months at the latest.