In a sworn court declaration TheDCNF reviewed, Lisa Storie-Avenatti asked a California court to grant her exclusive use of their marital home after she said her husband threatened and emotionally abused her. Both parties now dispute this account, as they finalize their divorce.

Despite these recent denials, Storie-Avenatti alleged her husband threatened to call the police and get them both arrested, which would cause her to lose custody of their son and put him into the hands of the state’s child protective services.

When asked for comment on Thursday, Storie-Avenatti denied Avenatti was ever abusive in an email to TheDCNF, apparently contradicting her sworn statement. Avenatti, labeled as “Baby” in her contacts, was copied on the email.

In court documents, however, Avenatti’s wife described him as emotionally abusive and lacking control over his anger — sharply contrasting the image of himself he has presented to the public while representing Daniels in her legal battles against President Donald Trump.

Despite the allegations she made in court, in her emailed statement, Storie-Avenatti described her husband as a “good man” to TheDCNF and portrayed her own allegations as having “no basis in reality.” 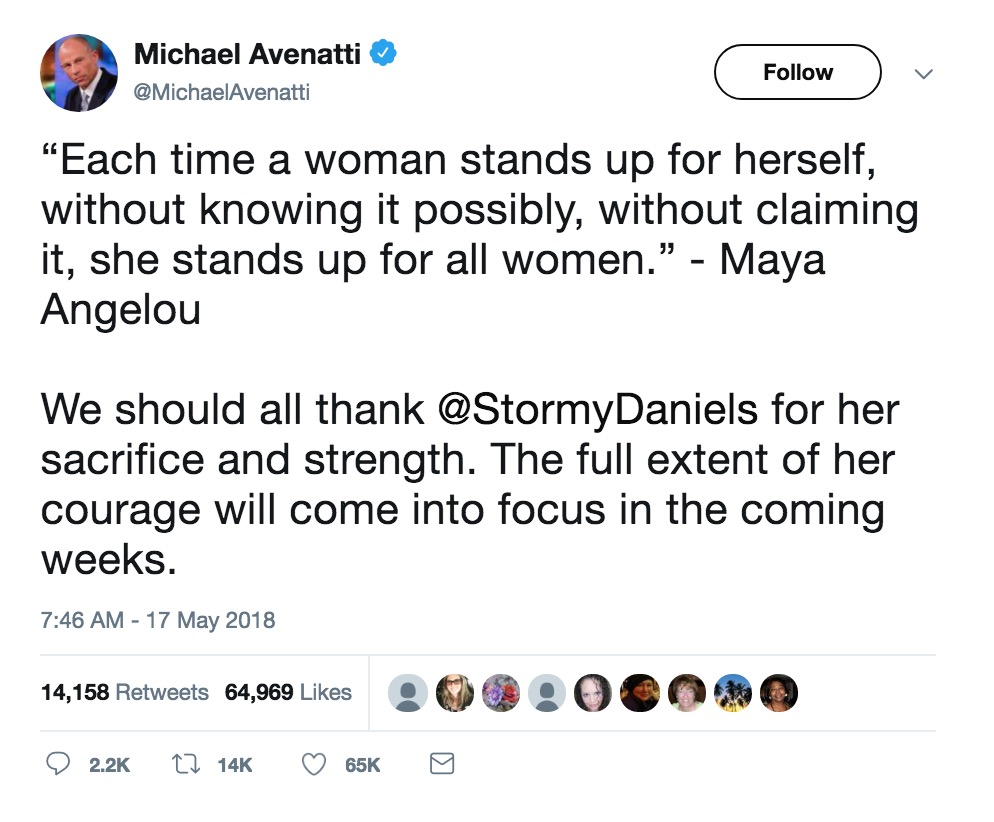 One of Avenatti’s strategies for winning over the public — and more importantly, the media —  has been “positioning himself as a feminist ally” in his legal battles against Trump, Vanity Fair noted in a May 17 article.

As he has entered the media spotlight, Avenatti has become a resistance hero of sorts. On Wednesday, West Hollywood Mayor John Duran proclaimed May 23 as “Stormy Daniels Day” in a ceremony Avenatti attended.

“Even when skepticism of straight, white alpha males is at an all-time high, women in America — and many men, too — have found themselves completely beguiled by Avenatti,” Vanity Fair raved.

Exactly five months before that Vanity Fair profile on his skincare routine and pricey outfits, Avenatti angrily berated and threatened his estranged wife outside the house they used to share, eventually calling the police on her, according to court documents.

On Dec. 17, 2017, Storie-Avenatti had offered for Avenatti to spend the day with their son, accompanied by a nanny, she recounted under oath in a Jan 3, 2018, declaration. (She had long been their son’s primary caregiver, as Avenatti was routinely absent and unreliable even before they separated, his mother told the court.)

Avenatti “took umbrage” at the stipulation and showed up outside the house in a fury that same day, she said in the declaration. Avenatti told TheDCNF on Thursday he had “to retrieve some of my belongings.” (The couple separated on Oct. 30, 2017, around which point Avenatti moved into a nearby luxury apartment, court documents show.)

Storie-Avenatti sent their young son upstairs with the nanny and confronted Avenatti outside the front door — at which point he “immediately started yelling at me to let him into the house and started to videotape me with his phone,” she recounted.

Avenatti “also threatened me that he would be staying at the house every night in the coming week,” she said.

During the dispute, Avenatti had brought with him his teenage daughter from his first marriage, who tried to hide as her father publicly berated his latest estranged wife, Storie-Avenatti recounted in her sworn declaration.

“I told [him] to stop making a scene and that he was scaring [his daughter], who was hiding behind a pillar,” she said. Avenatti retorted that he brought the girl as a “witness,” Storie-Avenatti told the court.

He “continued to yell at me and at some point must have called the police, who arrived. I heard [him] tell the police he wanted access to the house,” she said. “The police declined [his] request and later told me that this was going to be a nasty divorce.”

Avenatti challenged that description of the event in an email to TheDCNF on Thursday.

“The police arrived and informed me that I was correct that I should have access but stated they could not grant me access but if I wanted to force access, I could because I had every right to the home. I declined to do that because I did not want to escalate the situation,” he explained. “The police told me I was being more than reasonable and was the ‘calm’ one. The police declined to make a report despite my request that they do so.”

He also disputed he yelled or caused his daughter to hide behind a pillar — as Storie-Avenatti recounted in her sworn declaration. “I did not yell at her, and my daughter never ‘hid’ behind anything,” he said.

Two days after that incident, Storie-Avenatti met with Avenatti in a public place to discuss a Christmas “visitation schedule,” she told the court. It was at that meeting Avenatti allegedly threatened to make them both lose custody of their son.

“During our short meeting, [Avenatti] threatened he will ‘burn’ all of our money on our divorce case and that he will call the ‘cops’ again, causing us both to be arrested, which will, in turn, cause [our son] to be placed into protective custody,” Storie-Avenatti stated. (Avenatti called that anecdote “completely untrue.”)

That threat, her lawyers told the court, was further proof Avenatti “is angry and vindictive, and has no regard for emotional harm caused to his son, his daughter or to Lisa.” (RELATED: Avenatti’s Company Discriminated Against A Pregnant Woman And Then Refused To Pay Her Settlement, Court Docs Show)

Avenatti “is emotionally abusive, and it is harmful to [our son] and me for [Avenatti] to be staying with us in the same house; and he has his own residence where he has been staying since before October 2017,” she told the court. 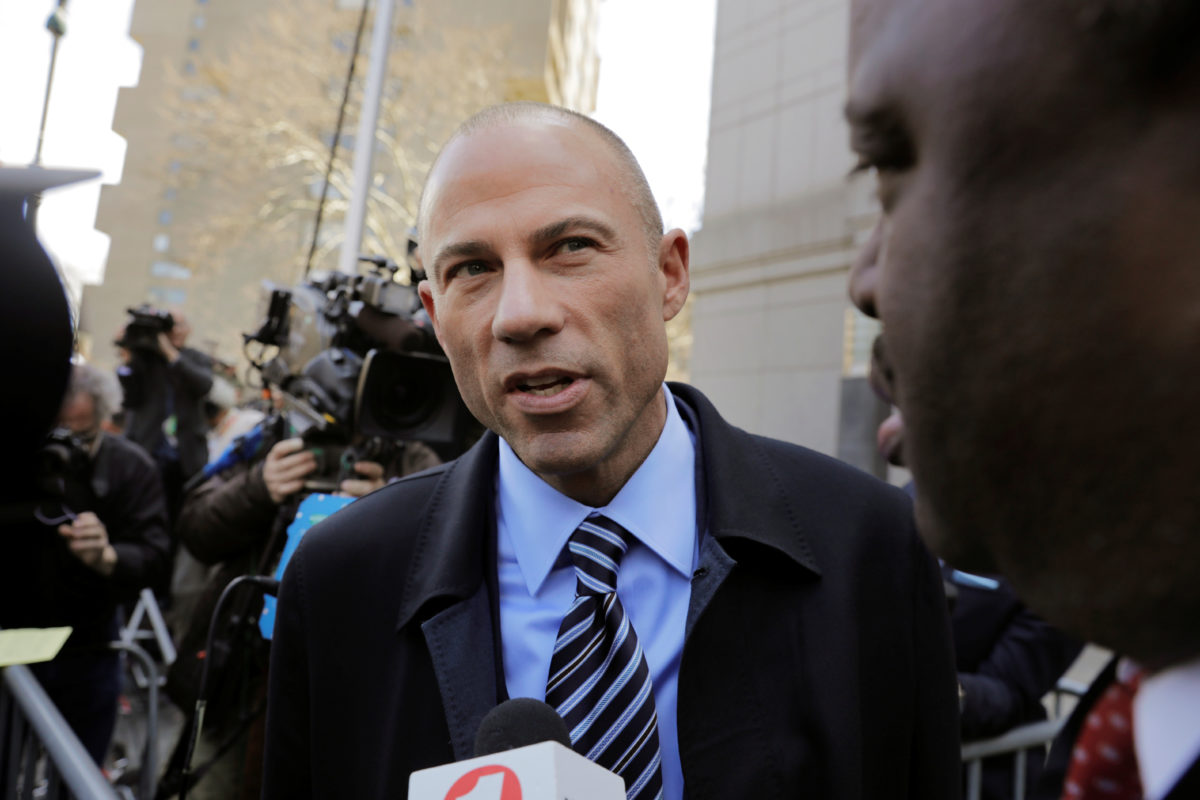 “I have never neglected nor abused any of my children,” Avenatti said in a Jan 8. declaration five days later. His wife had kicked him out of the house and changed the locks, Avenatti claimed.

He denied his wife’s sworn version of events, in an email to TheDCNF on Thursday.

“I never subjected my wife or any other woman to any threats or emotional abuse, and any claim to the contrary is bogus,” he wrote. “My first wife of 13 years can confirm this. I have never been arrested or charged with anything, and I have no history of any domestic abuse. I have never had any incident where the police were called for alleged domestic abuse or anything I have done. Ever.”

He added: “There are a host of things I could disclose relating to Lisa, her habits and the circumstances around her filing, but I will decline to do so at this time, as she is the mother to my son and I do not think it is appropriate to malign her.”

Storie-Avenatti issued a similar statement on Thursday, saying she and Avenatti are “presently finalizing a divorce, and we ask for privacy for our sake and that of our son. ”

“Further, he has paid all child support and spousal support. He is a good man. It appears you are trying to harm him and our family by publishing a defamatory story that has no basis in reality.”

TheDCNF asked Storie-Avenatti to clarify the apparent discrepancy between her sworn statement and her emailed statement, but she did not reply by press time.

On Saturday, Storie-Avenatti expressed her frustration with the divorce proceedings to Fox News.

“I need to be divorced; and if [Michael Avenatti] continues to paint the narrative, he can ignore our case!” she told Fox in a text message.

While her statement to TheDCNF suggests their upcoming split is on amicable terms, Storie-Avenatti made it clear to Fox it has been a difficult process.

“Everyone reports we are divorced. That does not help my goal to get a divorce,” she said. “Can you imagine divorcing him?”

Storie-Avenatti’s sudden reversal is the second time Avenatti has been accused of wrongdoing — only to have his accuser apparently retract their statement after TheDCNF reached out to Avenatti.

Dillanos Coffee CEO David Morris on May 8 accused Avenatti of owing him $160,000. Dillanos was a vendor for Avenatti’s coffee chain, Tully’s Coffee, but was forced to cut Avenatti off after never receiving payment, Morris said.

Avenatti previously threatened to sue TheDCNF for reporting on serious allegations in his background, although he has yet to challenge a single fact in TheDCNF’s reporting. Journalists at several other outlets have since said Avenatti threatened or intimidated them for reporting on him.

After that threat, TheDCNF uncovered further ethically questionable behavior in Avenatti’s past. Avenatti’s company, a Washington court found, fired a woman for being pregnant.

Despite the court ordering Avenatti’s company to pay a $120,000 settlement, the woman has yet to receive any money.