Country music artists Trace Adkins and Jerrod Neimann opened up about their experiences in the country music world following the Las Vegas massacre and their opinions on the NFL’s national anthem controversy in an exclusive interview with The Daily Caller Monday.

Both Adkins and Neimann played for the National Memorial Day Parade in Washington, D.C. “My grandaddy was in the Army way back when,” Adkins, a multi-platinum award-winning country music singer, said. “When we should memorialize the men and women who made the ultimate sacrifice for their country, should we just do that on one day? I think we should do that every day.” 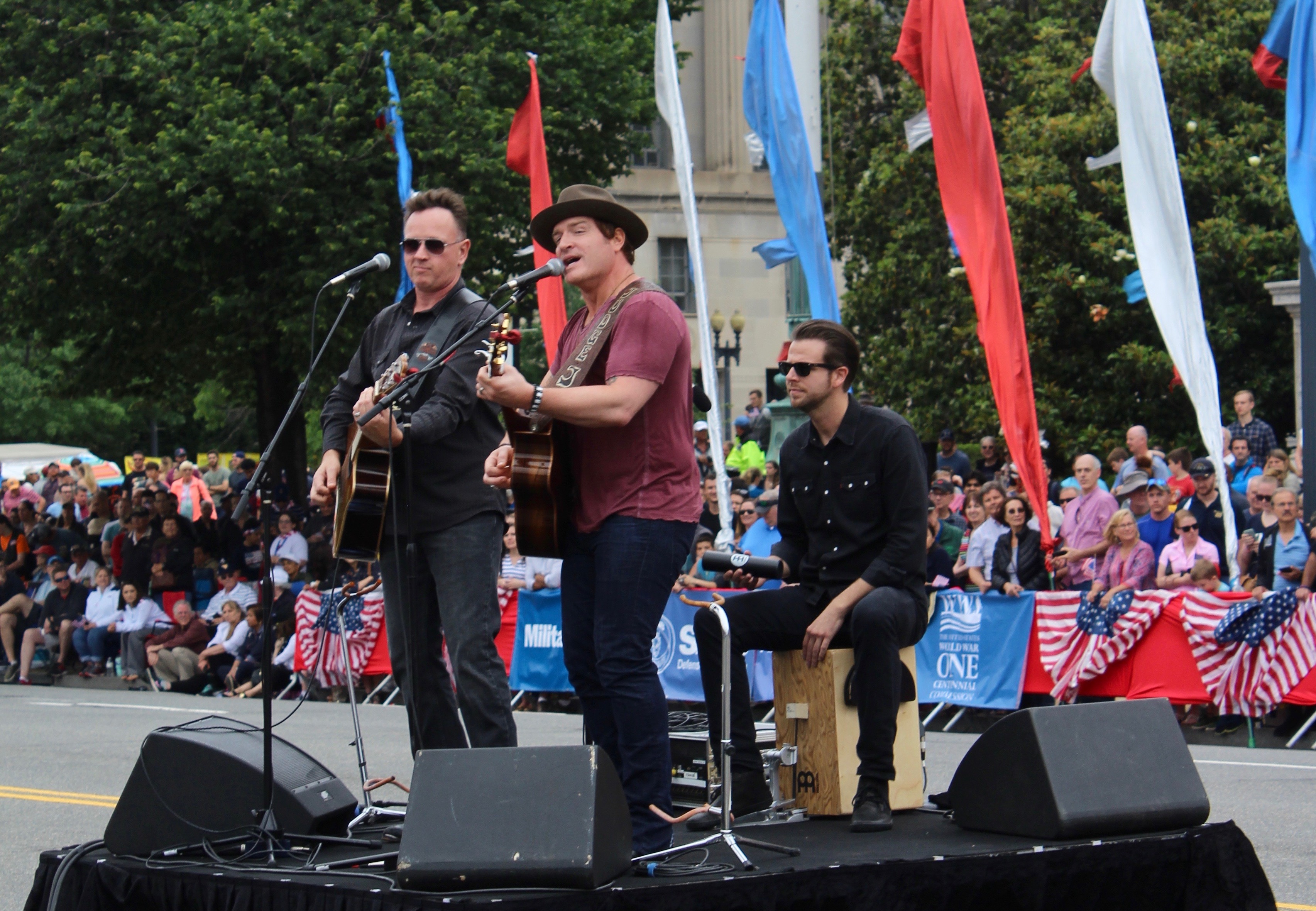 For Adkins, supporting the troops is a black and white issue. “You either support it or you don’t,” Adkins said. “I’ve always thought anybody who says that, ‘I support the troops, but–,’ to me you’ve disqualified yourself because whatever you say after the ‘but’ is really not important, and whatever you say before the ‘but,’ you didn’t really mean it.”

Neimann said the younger generation is what makes honoring the troops an important issue for him. “From the moment we’re born till we die, we’re obviously free,” Neimann stated. “And that freedom is so constant, and it’s easy to get lost in why we’re so lucky to be here.”

Both Adkins and Neimann had grandfathers that served in the military. Neimann memorialized his grandfathers’ service in a tattoo on his right arm in which he combined their service with the memory of Marines that Neimann met on a trip to Jamaica who were having a hard time both personally and physically in relation to their military service. 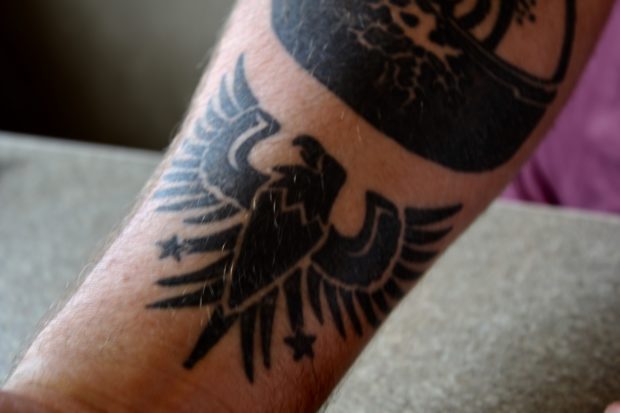 The tattoo on Neimann’s right arm represents Marines he met on a trip to Jamaica, as well as both of his granfathers who served in the military. (Julia Nista/The Daily Caller)

The 25 feathers represent the Marines he met, and the two stars represent his grandfathers’ military service.

He has another tattoo on his left arm that represents the division of our country, the “Lover, Lover” singer put it.

“For me it’s just, yeah we all could look around and talk about what’s wrong with our country but it’s the old ‘Hear no evil, see no evil, speak no evil,” and it’s just saying, we’re all aware of the problems, but what’s the solution? It’s more like a hope of working together.”

Neimann said how people “just don’t want to hear” opposing viewpoints and “will shake the hands of the person that they’re accusing.” 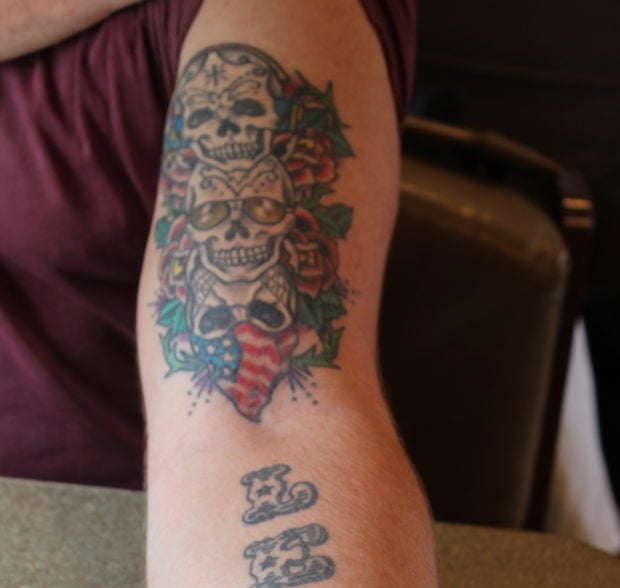 “That’s the craziest thing,” Neimann said. “I’ve met so many people with crazy backgrounds, and once you get to visiting they just laugh and say, ‘Hey you know, we’re all just the same.'”

Neimann also reflected on his friends who were affected after the Las Vegas massacre.

“I’ve obviously shot guns and I know how tough it is. The actual odds of those little bullets with those trajectories, it’s crazy to know that just right there it could have been you,” Neimann said. He added the people standing backstage “saw someone just fall to the ground, it was just like drop, drop, and they didn’t know any better of what was going on, they just thought someone fainted — and it was that they were getting shot.”

He talked about friends who were there during the shooting and “still have groups in Nashville where they meet and talk about it, and of course people want to get all over the NRA and attack our rights, but in reality I mean we have such a big country, a vast country, and they try to control everybody. There’s not ever going to be a solution, unfortunately.”

Although Adkins and Jason Aldean, whose concert occurred during the shooting, are on the same record label, the two had not talked following the Las Vegas shooting. “We are all going in different directions,” Adkins said. But he did mention that the country music world was shaken following the tragic occurrence, which has still not been fully explained.

Adkins also commented on the NFL’s recent decision to penalize players who choose not to stand for the national anthem, saying, “I think that the NFL is a private business, just like any other private business.” He added that the NFL has “the right to tell their employees” what to do.

“It’s my understanding that when you sign a contract to play for the NFL, they have a code of conduct, a morality clause in their contract. If you don’t want to sign the contract, don’t sign the contract. If you do then you should abide by what it says in that contract, this is how we expect you to conduct yourself. You represent the NFL now, and this is the way we think you should conduct yourself,” the “Still A Soldier” singer said. “And if you don’t like that… You know? I don’t think it prevents anybody from espousing their political views, just do it on your own time.”

Adkins also said that with professional athleticism and gained notoriety, athletes can “use that platform the way you want to use it on your own time. But when you’re on the job, do the job.”

For Neimann, the NFL protests are a perspective he has never had, saying, “If I was raised my whole life feeling oppressed and disrespected, then I would be able to answer that from every side of the fence.” He added that he is “obviously very patriotic and grateful” and “always, naturally, would stand and take my hat off at the national anthem.”

“The only thing I’ll say about the whole thing with the NFL is everybody has the right to protest for sure, but I’d like to see some of those protests turn into not just at the game with the cameras on them, but what happens on Twitter, on Instagram, bring communities together or get them together with some law enforcement,” Neimann said.