Actress Roseanne Barr is under fire for a Tuesday morning tweet attacking Valerie Jarrett, advisor to former President Barack Obama. Barr later deleted the tweet — but not before a number of people called for ABC to fire her from her newly-rebooted show.

Barr’s tweet compared Jarrett, who was born in Iran to African-American parents, to apes and the Muslim Brotherhood.

Many critics were quick to respond to her tweet, calling for ABC — and parent company Disney — to reconsider Barr’s employment.

How in the world does @ABC & @Disney justify this?

Roseanne literally just said that Valerie Jarrett, who was Senior Advisor to President Obama, is like the Muslim Brotherhood & Planet of the Apes having a baby.

This is the gross normalization of bigotry in America. https://t.co/zPYE1nBGPA

Hey @ABC, Roseanne Barr compared Valerie Jarrett to an ape. There is no apology she can make that justifies @ABC turning a blind eye to this bigotry by airing another second of her show.
Even in the Age of Trump, there are red lines that can never be crossed. This is one.

ABC is doing their best to ignore some of these statements from Roseanne and she is making it really hard for them by taking it to next level here. https://t.co/gykFmXedPa

Barr responded to CNN’s Andrew Kaczynski, claiming that her comment was meant to be a joke — but Kaczynski suggested that it was not likely to be taken as such.

I understand it’s a joke, but can you see why some people think comparing a black woman to Planet of the Apes might be racist and find the Muslim Brotherhood reference to be conspiratorial and Islamophobic? 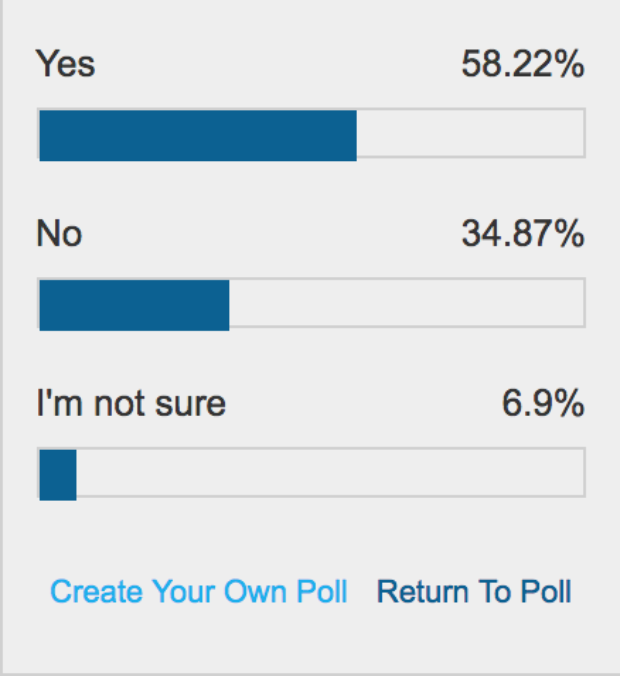 Poll asking voters is “Roseanne” should be “scrapped” from ABC shows 58 percent in favor, screenshot via TVline

In light of Barr’s comments, TVline published a poll asking whether the already contracted season 11 of “Roseanne” should be scrapped — so far 58 percent of those polled are ready to see her off the air.