NFL legend Herschel Walker weighed in on the league’s new national anthem policy Wednesday at the Sports and Fitness Day event held at the White House.

“My feeling on the anthem is I felt they should have been standing at the beginning,” the 56-year-old football player explained, according to The Hill. 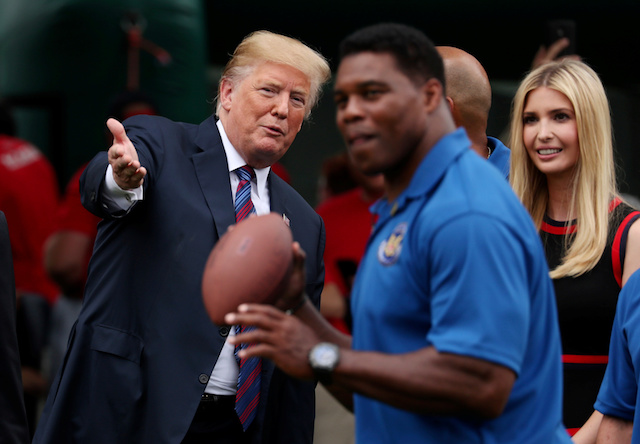 President Donald Trump talks to his daughter and advisor Ivanka Trump as they watch former NFL star Herschel Walker throw a football during the White House Sports and Fitness Day event on the South Lawn of the White House in Washington, U.S., May 30, 2018. REUTERS/Jonathan Ernst

Last week, the league announced the new policy that states players who take the field with their teammates must stand for the singing of the “Star Spangled Banner” or they will incur a fine for their team.

Walker, currently sits as one of the chairs of President Donald Trump’s Council on Sports, Fitness and Nutrition. He participated in the event held at the WH designed to encourage kids to take part in youth sports.

The former Dallas Cowboys player was joined by other well-known athletes and members of the council for the event, including Olympic gold medalist volleyball player Misty May-Treaner and former Yankees pitcher Mariano Rivera.

Kids from all over the country came to play all kinds of sports with the athletes, ranging from flag football to golf on the South Lawn of the WH.