The day after Roseanne Barr was fired by ABC for sending an offensive tweet about former Barack Obama advisor Valerie Jarrett, liberal comedian/activist Samantha Bee launched her own offensive attack against a presidential adviser. This time it was Ivanka Trump, with Bee calling her a “feckless c**t” on her show last night over President Trump’s stance on illegal immigration. Tonight, Bee is scheduled to receive an award from the Television Academy for “advancing social change.” Were it not for double standards…

She also implied incest between Ivanka and her father because that’s what passes for funny these days with leftists. Whatever happened to comedy? Remember when it was about telling jokes? Now it’s about spewing left-wing politics and insulting anyone who doesn’t share them to a like-minded audience ready to applaud on cue like barking seals hoping to have fresh herring tossed to them if they balance the ball on their nose long enough. Roseanne blamed Ambien for her tweet about Valerie Jarrett; will Sam Bee blame being Canadian? Or maybe just being a jackass? We play you the audio and dissect it on the show.

Poor Jim Acosta. The CNN White House correspondent was very upset yesterday that President Trump called out the president of Disney, the parent company of ABC, for hypocrisy after the company head called and apologized to Jarrett for Roseanne’s tweet. Trump wanted to know where his apology was for all the things employees of Disney, like Keith Olbermann and Joy Behar, have said about him. This caused Jimmy to clutch his pearls and demand Trump apologize for everything he’s said that the “journalist” found offensive. In the process, Acosta angrily complained that Kim Kardashian was at the White House to talk about criminal justice reform. Jim, apparently, forgot completely about his own elevation of a celebrity on the very same issues just three years ago. We explain and mock. 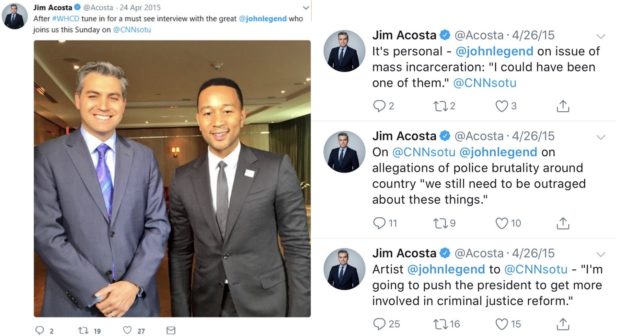 Not all the news yesterday was bad. President Trump signed into law the “right to try,” giving terminally ill patients the option to take experimental drugs not yet approved by the Food and Drug Administration. This bipartisan law will bring hope to the people who need it most and is proof that every once in a while the federal government can get out of the way and let people make important choices for themselves. But only every once in a while…

The Daily Daily Caller Podcast is a daily show that mocks the news and newsmakers from a conservative perspective. Hosted by Derek Hunter, it is available in audio form Monday-Thursday and will have a video option on Fridays.