Occupy Wall Street posted Pruitt’s address on Twitter on Monday along with a New York Times article detailing the EPA head’s “cozy ties” with Joseph Craft, a coal executive. The group gave out his address to their Twitter followers “if you want to take [your] pitchfork to him directly.” 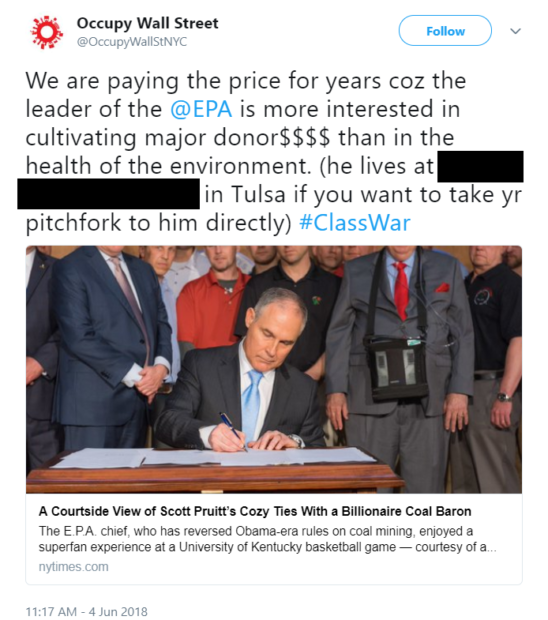 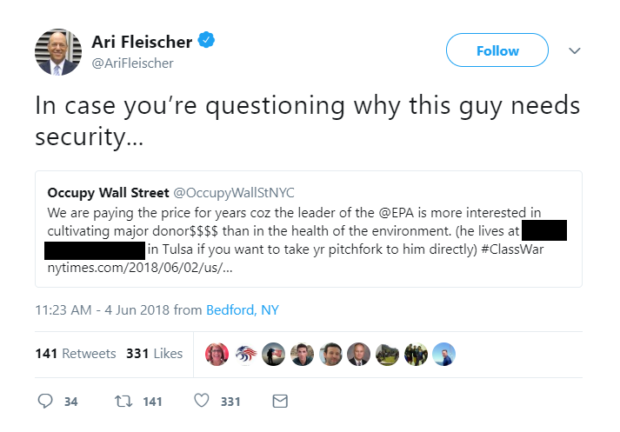 Pruitt’s come under intense scrutiny from Democrats over first class flights, renting a room from the wife of a D.C. lobbyist and outspending his predecessors on security. EPA spent nearly $3 million on Pruitt’s security when travel costs are included.

EPA said Pruitt faced an “unprecedented” amount of death threats, and his security team has reported unpleasant incidents with people at airports and other locations they say prompted more security. (RELATED: SF Housing Prices Are So Bad People Are Paying $2,400 For 220 Sq Ft Boiler Rooms And Basements)

Pruitt’s 24/7 security detail was put in place by former EPA official Don Benton based on potential threats the administrator could face while implementing Trump’s agenda.

“Also, I have requested 24/7 protection for the new administrator for the first week at least and the evaluate from there,” Benton, a former Washington state senator, wrote in an email dated Feb. 11, 2017.

“There will be Executive Orders signed when he is sworn in that will likely stir the hornets [sic] nest and with the security issue in the Atlanta office last week as well as the lady who threatened former administrator McCarthy not showing up for court and at large in DC it is best to be on the safe side,” Benton wrote.