CNN reporters are defending the network from criticism that they inappropriately speculated about the whereabouts of first lady Melania Trump.

After undergoing kidney surgery, Mrs. Trump took a respite from public life and opted not to attend any events for close to a month. Instead of accepting Mrs. Trump’s desire to remain away from the press, the media alleged that she had “disappeared” or gone “M.I.A.” and speculated about where she might be hiding — and why. (RELATED: Journalists Continue Speculation On Melania’s Health)

President Donald Trump finally took to Twitter to defend his wife, knocking the media for their “unfair” and “vicious” statements about the first lady.

“The Fake News Media has been so unfair, and vicious, to my wife and our great First Lady, Melania,” he wrote. “During her recovery from surgery they reported everything from near death, to facelift, to left the W.H. (and me) for N.Y. or Virginia, to abuse.”

The Fake News Media has been so unfair, and vicious, to my wife and our great First Lady, Melania. During her recovery from surgery they reported everything from near death, to facelift, to left the W.H. (and me) for N.Y. or Virginia, to abuse. All Fake, she is doing really well!

…Four reporters spotted Melania in the White House last week walking merrily along to a meeting. They never reported the sighting because it would hurt the sick narrative that she was living in a different part of the world, was really ill, or whatever. Fake News is really bad!

CNN reporter Brian Stelter insisted it was “random Twitter commenters” who were responsible for the gross speculation, not the media.

Trump is conflating random Twitter commenters with “the media” here. A common tactic of bad faith critics. But disappointing to see POTUS do it. pic.twitter.com/7tWObMmUdD

Of course, CNN itself was one of the outlets to suggest that something was amiss with Melania’s absence from public life in a segment on Stelter’s show “Reliable Sources.”

“The last time we caught a glimpse of her was on May 10,” Stelter said. “There’s been a lot of questions about her surgery at Walter Reed and now her invisibility…how long does she have to be out of sight to make this a legitimate media story?”

“When a first lady disappears from the public scene 24 days after being in the hospital of course reporters are going to raise questions,” Lynn Sweet said. “If she’s doing stuff in the White House isn’t there a picture?”

CNN’s Don Lemon continued the trend, closing his Monday show by noting that Melania had finally attended an official event but that, “it is a legitimate question — we have not seen the first lady in 24 days.”

“Where is she?” Lemon questioned.

Stelter also led his “Reliable Sources” newsletter on June 3 with the headline “Melania M.I.A.” and called the first lady’s whereabouts a “mystery.” 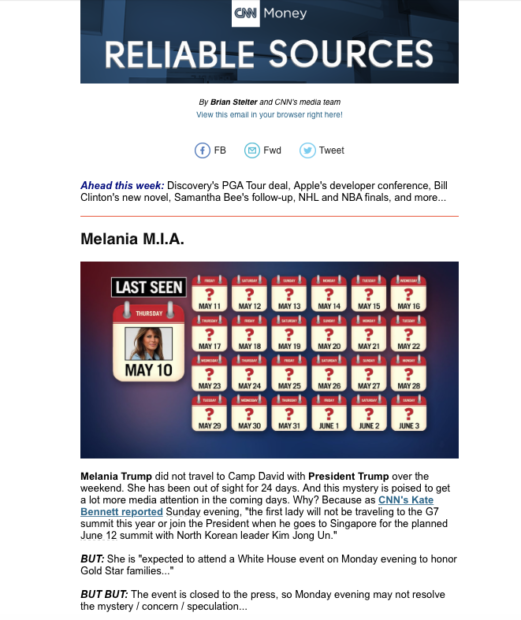 Stelter and CNN’s Kate Bennett still doubled down against the president’s tweet. They honed in on Trump’s use of the word “reported” and argued that the press never specifically reported that Melania was “near death…had a facelift, or anything in bewteeen [sic].”

I am to my knowledge the only reporter on the @FLOTUS beat full time from a major outlet, and I never reported she was near death or had a facelift, or anything in bewteeen it similar. https://t.co/4yeX3qcFIF

While members of the media never wrote news articles claiming that any of these things happened, several did engage in rank speculation about such incidents on their Twitter accounts. Jamil Smith of Rolling Stone and David Frum of The Atlantic, for example, both suggested that Melania was “concealing abuse” from the president. (RELATED: Journalist Wonders If Trump ‘Punched’ Melania — The First Lady’s Office Hits Back Hard)

And while CNN only speculated — rather than reported — what was going on with Melania, they chose to repeat such “conspiracy theories” in an article. Stelter said those conspiracy theories from “random Twitter commenters” were being unfairly conflated with media reporting, yet CNN felt the need to print them and ask the first lady’s spokesperson to comment on them.

In fact, Stelter and Bennett’s defenses fell apart even more as their own colleague admitted in response to Trump’s tweets that journalists were “irresponsibly” speculating.

“He’s not wrong that journalists irresponsibly, and without evidence, publicly speculated about all sorts of hypotheticals,” Tapper tweeted on Wednesday. “Doing that hurts all journalists.”

a) He’s not wrong that journalists irresponsibly, and without evidence, publicly speculated about all sorts of hypotheticals.
Doing that hurts all journalists.

b) Yes of course he does the same thing all the time — smearing and lying. That doesn’t mean we lower our standard. https://t.co/s5LSAMIPTY