MSNBC host Joy Reid criticized the black community in a blog post from years ago in terms that would certainly raise eyebrows among progressives today, according to screenshots obtained by The Daily Caller.

In Florida, the dropout rate for Black kids is still at around 50 percent, higher than for any other group. And the cycle of joblessness, crime, marginalization and depoliticization (including the loss of voting rights in nine states including Florida for those with felony convictions) can only help to continue wrecking urban communities – especially small inner-city communities that either haven’t attracted the attention of developers yet, or that have, and therefore are ripe for eminent domain and other techniques to ‘cleanse’ them of the undesirable poor.

The imperative now is to find some solutions. One that I could think of off the bat, is a move to change the culture of ‘Black America.’ If I see one more commercial for a gangsta movie or CD, I think I’ll puke. We’ve got to start modeling more productive ideas to our young men, rather than just materialism, misogyny, sexual promiscuity (including bisexual promiscuity) and the relentless pursuit of a fictional, rented house, rented jewelry gansta lifestyle. What are you saying about yourself and your community when you finally land a record deal, and choose to call your label Murder, Inc. or Death Row? And why are you surprised when the feds pay it extra attention? (Hollywood hasn’t exactly been helpful with its glorification of pimps and gangstas both in the greenlighting process and during the recent Oscars…)

I blame a lot of this on BET, which has pumped cultural toxic waste into Black living rooms for nearly 30 years, with barely a break for positive, informative programming,” she continued. “A lot also has to do with the rap music industry, which has traded on the nihilistic rot of street culture as a way to make a few phony thugs rich at the expense of the good sense of millions of African-American kids. And the slide of American culture away from the necessity of fathers hasn’t helped – clearly, kids do need them, along with present, lucid mothers.

It’s important to note that by no means are all Black men in this miserable condition. For every knucklehead, there are upstanding men out there doing the right thing – even doing big things – and taking care of themselves and their families and going to work everyday. But clearly, it’s time for a house cleaning in the larger Black community. We may not like it, but it’s long overdue. 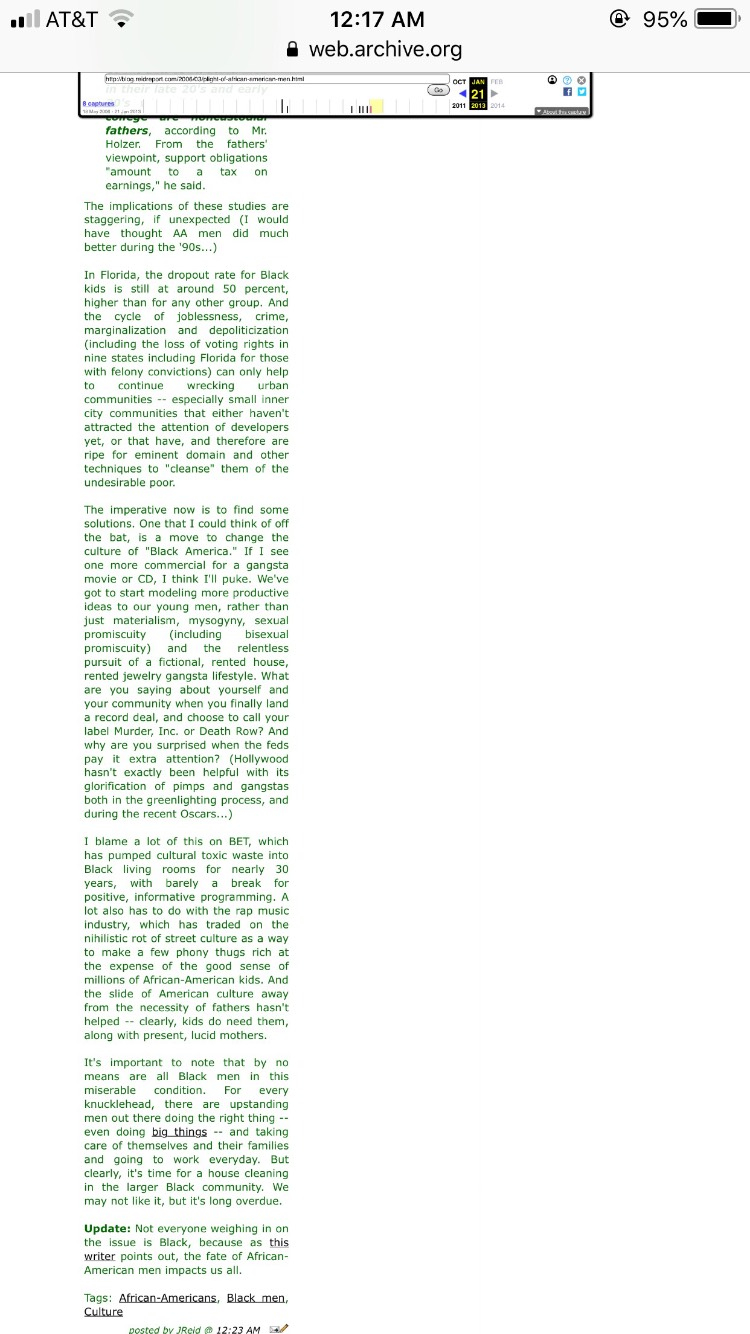 Screenshot is presented here exactly as it was provided to The Daily Caller.

A number of old posts from Reid contain some inflammatory and offensive remarks.

In one post, she remarks on how Israel is covered by Jewish journalist Wolf Blitzer. She accuses him of wearing a “flak jacket” for AIPAC, a pro-Israel group where he used to work. (RELATED: Joy Reid Wrote About Possible ‘Dual Loyalties’ Of Israel Supporters, Said AIPAC ‘Holds The Whip Hand’ Over U.S. Politicians)

Reid previously claimed that her old blog posts were placed there by a hacker, claims that she has not been able to prove at all. (RELATED: Joy Reid’s Hacking Story Filled With Holes)