A New Jersey professor who condemned “little Caucasian a**holes” and said he “resign[ed]” from his race remained unrepentant in a Wednesday column.

Rutgers University professor James Livingston complained about “hate mail” he received following his remarks and insisted that “reverse racism” did not exist, in a column titled “Confessions of a Race Traitor.”

“[H]aving witnessed the election of Donald Trump, I should have seen the hate mail coming,” the professor wrote. “I didn’t.”

He said he received approximately 70 such messages, a few of which threatened him with injury. Livingston did not retract his comments, in which he said he “hate[s] white people,” called white children “s**thead” and “moron,” and advocated for apartheid; however, he suggested in the column that individuals contacting him “can’t seem to take a joke or slip the yoke.” 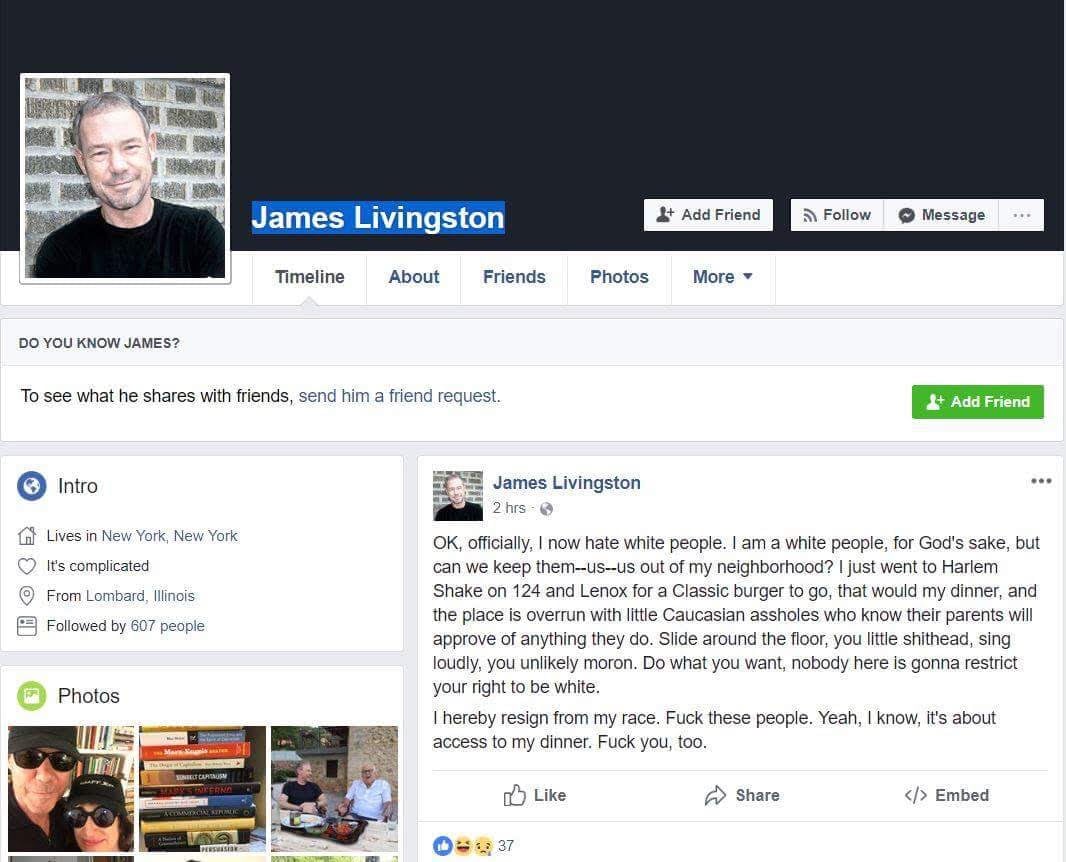 “I’d be worried, and maybe even penitent, if I thought that ‘reverse racism’…was in the realm of reality, where we could measure its results,” Livingston said. “But there’s no such thing.”

“Do you have unseen and unspoken power over others merely because you were born a white boy and they weren’t?” he asked readers. “Ask yourself, and be honest about it. OK, it’s a rhetorical question with a built-in answer. Of course you do.”

The professor explained that black people who hate white people cannot be called racist unless they hold power over those they hate. He proceeded to suggest that white people who did not believe in white privilege should be members of the Ku Klux Klan.

“You want to think you never benefited from the color of your skin, and indeed that your beigeness has somehow marginalized you, socially and culturally, maybe economically,” Livingston stated. “What a joke. On you. You’re ridiculous. You ought to be wearing white robes and burning crosses on your field of dreams, except that you send your hate mail via Apple watches.”

“I just say enough already with the code that tells us that white is the norm, the standard to which we must all adjust,” Livingston concluded. “I’d like to be free of its imperatives, and its permissions. I don’t want to be black. I just don’t want to be white.”

Rutgers University announced that it is investigating the professor, who has authored books like “No More Work: Why Full Employment Is A Bad Idea” and “Origins of the Federal Reserve System: Money, Class, and Corporate Capitalism, 1890-1913,” and stated that “there is no place for racial intolerance” at the school.

“The matter was referred to the Office of Employment Equity (OEE) at Rutgers University to investigate whether the comments violate university policies prohibiting discrimination and harassment,” Rutgers spokeswoman Dory Devlin told The Daily Caller News Foundation. At the end of the review, OEE will transmit its findings to the leadership at Rutgers-New Brunswick who will determine if corrective or disciplinary actions are warranted.

The school was not the only institution to speak out after Livingston’s since-deleted Facebook screed. (RELATED: Rutgers Investigating Prof Who Condemned ‘Little Caucasian A**holes’)

The owners of Harlem Shake, the restaurant where Livingston had witnessed the white children that later became the subject of his tirade, blasted the professor to The Blaze.

“We ask that our name is removed from your rant because we do not want to have anything to do with you,” Harlem Shake owners Jelena Pasic and Dardra Coaxum said. “And yeah, we ask that you get your burgers somewhere else. We do not tolerate ‘racism’ either. We thrive on equality and fairness and have full intentions to keep it that way!”