The Kim Jong Un impersonator who rattled a few North Korean cheerleaders during the Winter Olympics is back, this time in Singapore.

Howard X, an Australian comedian known for impersonating the young North Korean dictator, told reporters he was detained by authorities shortly after he arrived in Singapore Friday, Reuters reported.

Howard was picked up by authorities at Changi Airport and questioned about his political views. He was held in detention for roughly two hours and interrogated for 30 minutes, he revealed. 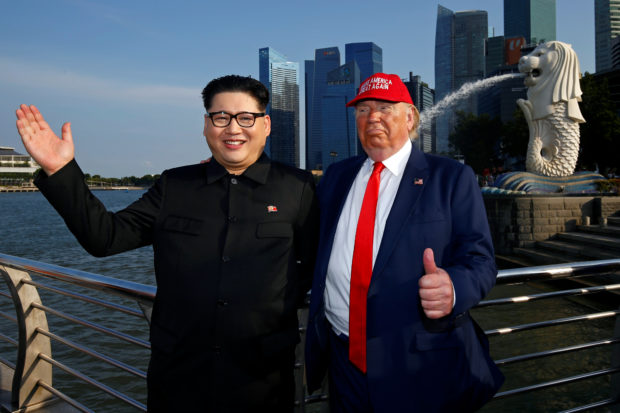 “It’s the Trump-Kim summit, you’ve come at a very sensitive time,” authorities told Howard, according to his version of what transpired.

“They asked me what my political views were and if I have been involved with protests in other countries,” he said, telling reporters he was instructed by the Singaporean authorities to stay away from Sentosa, where President Donald Trump’s summit with Kim Jong Un will take place Tuesday. He has apparently been told to steer clear of the “special event areas.”

Howard has been traveling with a partner, a Trump impersonator named Dennis Alan, but Singapore does not seem particularly interested in their antics during what is one of the most important geopolitical events in years — an unprecedented meeting between a North Korean leader and a sitting American president.

The comedian first made a real name for himself at the 2018 Pyeongchang Winter Olympics in Seoul. (RELATED: Kim Jong Un Lookalike Riles Up North Korean Cheerleaders At The Olympics)

these photos of a kim jong un impersonator walking in front of the north korean cheerleaders are amazing https://t.co/bs4U8A5hF6 pic.twitter.com/RzwkjpILhv

The North Korean cheerleaders, handpicked for their good looks and loyalty to the regime, were not happy when Howard, impersonating Kim, appeared. Their initial confusion quickly gave way to outrage as he strolled past them during a hockey match in Gangneung, South Korea.

He was expelled from the arena for making political statements.