Greer’s deep-seated ire is due to the fact that June 11 is the day those rules imposed in 2015 officially end, leading to Greer’s belief that cable companies now get “even more power to screw you over.”

The use of “fuck” is unseemly; however, its use in a lot of cases shouldn’t ruffle feathers too much. In this specific instance, such language isn’t inherently innocuous.

As a leader of the movement to maintain the regulations, Greer presumably influences a large faction of followers, which have unleashed extremely vile, racist attacks against Pai. Such Twitter vitriol will likely inflame the already-hysterical passions of the loosely affiliated, yet loud group.

“I tweeted something that is the top comment on every reddit thread about net neutrality,” Greer told The Daily Caller News Foundation. “This is how people from across the political spectrum on the Internet are feeling today. As an outlet that claims to support free speech, I would think you’d appreciate someone telling it like it is.”

Greer has been accused of organizing campaigns on reddit before to intensify (perhaps inflate) the criticism against Pai and the commission’s decision to undo the regulations.

Criticism of a public official is fair game, but when it is laced with vulgarities and doesn’t address the nuances of the issue, it is likely counterproductive to their own ultimate goals. Even more importantly, it can lead to far more serious and sinister activity, like death threats, which Pai has been on the receiving end on multiple occasions.

Pai’s young children have been included in the hateful conduct both through certain tweets and signs posted adjacent to their home.

“It’s unfortunately become trendy for those on the left to hurl obscenities rather than engage in rational policy discussion,” Nathan Leamer, a policy adviser to Pai, told TheDCNF. (RELATED: The FCC Repeals Internet Regulations After Months Of Wild Protests)

“Hateful, ad hominem attacks like this add absolutely nothing to the substance of the debate and absolutely everything to the inappropriate, vitriolic responses to a public servant,” O’Rielly told TheDCNF. “It is irresponsible and disgraceful, and an apology should be issued.”

Greer, never one to shy away from controversy in pursuit of the manifestation of his convictions, has appeared alongside Democratic Sen. Edward Markey of Massachusetts and other party members at press events. 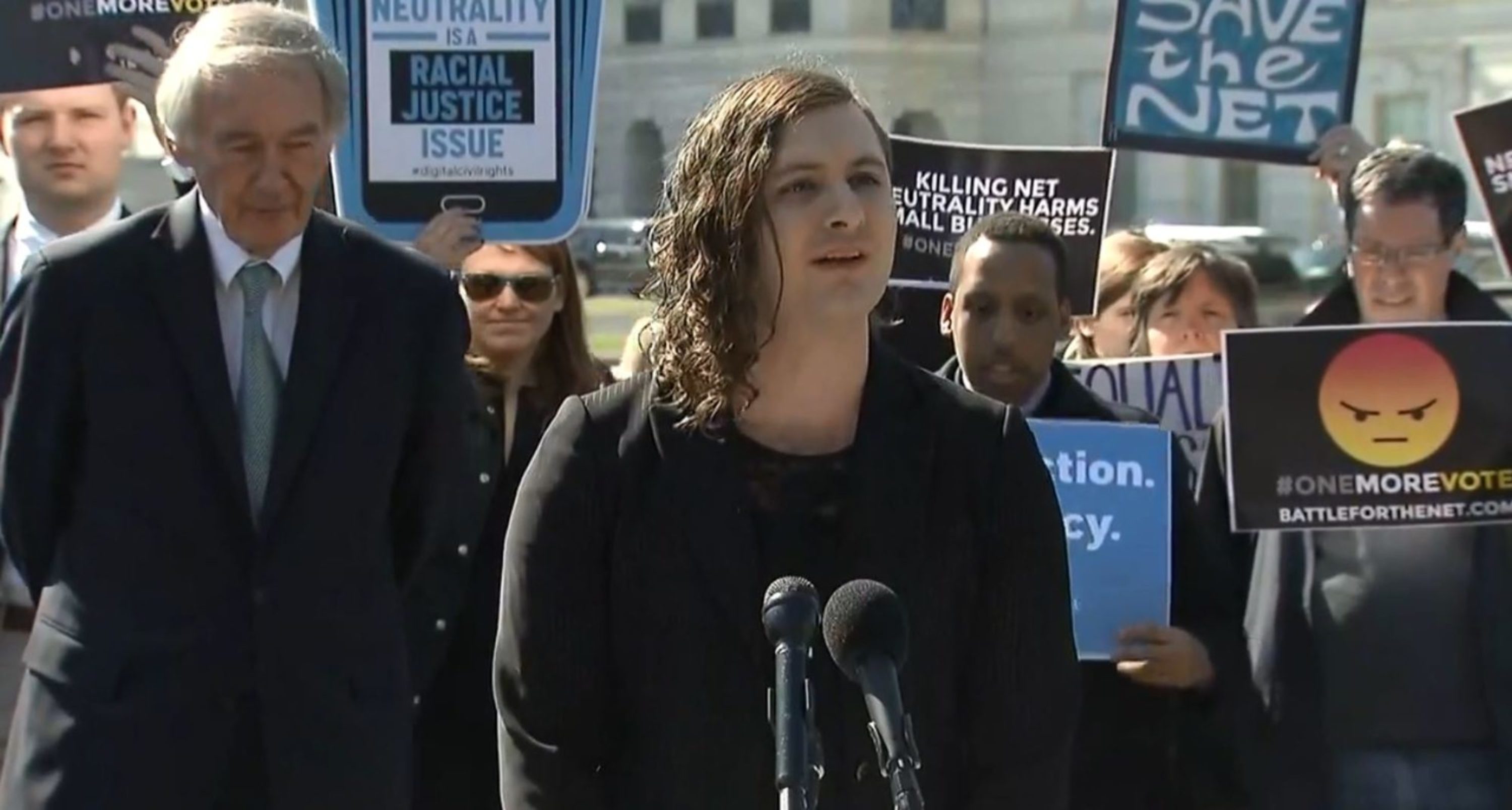 Evan Greer is speaking at the press event after being introduced by Sen. Markey. (Photo: Facebook Live)

TheDCNF reached out to the Internet Association, a trade organization representing big companies like Google, Facebook and Netflix — which could arguably benefit from the prospect of preserving net neutrality rules — to see what it thought of Greer’s comment, since they have worked with Greer’s organization Fight for the Future for certain events.

A representative declined to comment, but pointed to a statement in which the corporate group condemned the “threats and racist remarks directed at Chairman Pai,” calling it “wrong.”

“Chairman Pai is a decent and kind person, and while we disagree on net neutrality, I have tremendous respect for him,” Internet Association President Michael Beckerman said on May 10, 2017. “Internet Association and its members are committed to an open and safe environment online for internet users to freely express themselves. That commitment extends to public policy discussions. Hateful or threatening speech in any form is counter to our mission and values.”

Beckerman also came out to denounce Fight for the Future’s “betrayal” billboards in which House Majority Whip Steve Scalise was targeted while “recovering in the hospital” from gun shot wounds suffered during a congressional baseball practice.

Describing it as “despicable,” Beckerman said, “The tactics being used by Fight for the Future are not constructive.”

“It is disingenuous for Fight for the Future to oppose working with Congress on legislation, while at the same time attacking members of Congress on this issue,” he continued.