“They have great beaches. You see that whenever they’re exploding their cannons into the ocean,” the real estate mogul turned president said during a press conference in Singapore. “I said, ‘Boy, look at that view. Wouldn’t that make a great condo? Instead of doing that you could have the best hotels in the world right there.​'” 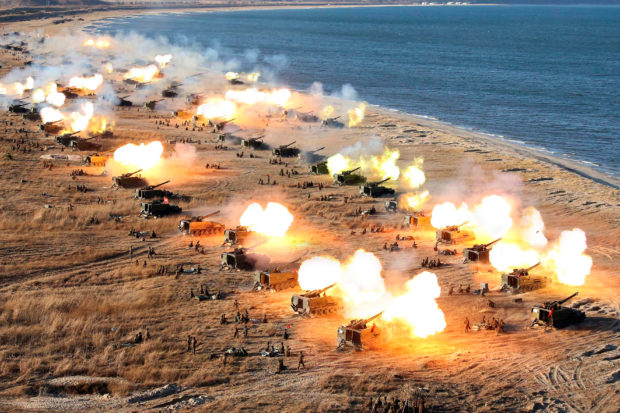 “Think of it from a real estate perspective, you have South Korea, you have China, and they own the land in the middle, how bad is that, right? It’s great​,” he explained during a video presentation at Tuesday’s summit.

This is a still frame from the video Trump showed Kim during their meeting, as an example of North Korea’s beaches that are ripe for development. Can anyone tell me where it was shot? I don’t recognize the twin hotel spires. pic.twitter.com/5PVvt5Twqe

“I told them, you may not want to do what’s there (on the videotape),” Trump explained. “You may do a smaller version of it, and that could be. Although I tell you what, he looked at that tape, he looked at that iPad, and I am telling you, they really enjoyed it, I believe.”

For weeks, the Trump administration has been signaling that the U.S. is prepared to help North Korea build a bright and prosperous country if its leadership deals away its nuclear arsenal.

Our United States team has arrived in North Korea to make arrangements for the Summit between Kim Jong Un and myself. I truly believe North Korea has brilliant potential and will be a great economic and financial Nation one day. Kim Jong Un agrees with me on this. It will happen!

At the same time, North Korea has taken a greater interest in economic development, the second part of Kim’s two-stage strategy to first develop nuclear weaponry and then pursue economic growth.

During the historic summit in Singapore, Kim reiterated his commitment to the denuclearization of the Korean Peninsula, and Trump offered certain security assurances to the North, as well as a pledge to pursue improved bilateral relations. (RELATED: Here’s What Trump, Kim Jong Un Agreed To At The Summit)

It is unclear whether North Korea has any intention of trading away its nuclear arsenal, but Trump seems convinced that Kim is ready to do so. (RELATED: Trump Says Kim Jong Un’s Tossing His Arsenal And ‘De-Nuking The Whole Place’)