President Donald Trump showed North Korean leader Kim Jong Un a super intense video during their summit in Singapore, and it definitely does not disappoint.

“Two men, two leaders, one destiny,” an overly dramatic voice over says, nothing that this is “a story about a special moment in time when a man is presented with one chance that may never be repeated.”

“What will he choose? To show vision and leadership—or not?” the disembodied voice asks.

The unusual video, called a “story of opportunity” and scripted like a movie trailer, was part of a sales pitch. The Trump administration has been striving for weeks to convince Pyongyang that it is ready to facilitate North Korea’s economic development in exchange for complete, verifiable and irreversible denuclearization.

Our United States team has arrived in North Korea to make arrangements for the Summit between Kim Jong Un and myself. I truly believe North Korea has brilliant potential and will be a great economic and financial Nation one day. Kim Jong Un agrees with me on this. It will happen!

The four-minute video was apparently intended to show Kim that there are two paths: one leads to a bright and prosperous future, and the other leads to poverty and isolation — the latter being a situation with which North Korea is quite familiar.

“History is always evolving, and there comes a time when only a few are called upon to make a difference,” the narrator says, “But the question is — what difference will the few make? The past doesn’t have to be the future. Out of the darkness can come the light, and the light of hope can burn bright.”

“Will this leader choose to advance his country and be part of a new world? Be the hero of his people?” the theatrical video asks, “Will he shake the hand of peace and enjoy prosperity like he has never seen?” (RELATED: President Trump And Kim Jong Un Meet For The First Time At Singapore Summit) 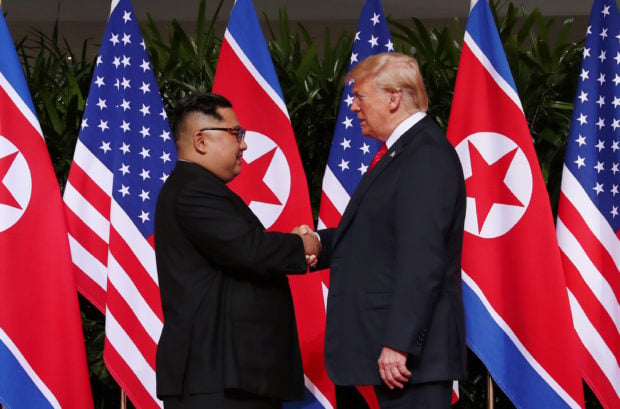 Trump said Kim, the son of a huge film buff, thoroughly enjoyed the presentation. “I think he loved it,” the president said at his post-summit presser. The two leaders signed an agreement at the summit designed to keep diplomacy moving in the right direction. The U.S. side offered certain security assurances and promises to pursue improved relations while the North Korean side committed to the complete denuclearization of the Korean Peninsula. (RELATED: Here’s What Trump, Kim Jong Un Agreed To At The Summit)

Additional meetings between the president and Kim are expected to follow at some later date. (RELATED: Trump Says He Will ‘Absolutely’ Invite Kim Jong Un To The White House)