German authorities arrested Sief Allah H, a 29-year-old Tunisian national, on Wednesday on suspicion that he manufactured and stored Ricin in his Cologne apartment, The Associated Press reports.

Authorities say that in May of this year Sief purchased a large quantity of castor bean seeds, which are the key component in Ricin. When authorities raided his apartment, they discovered that he had already manufactured some of the poison. 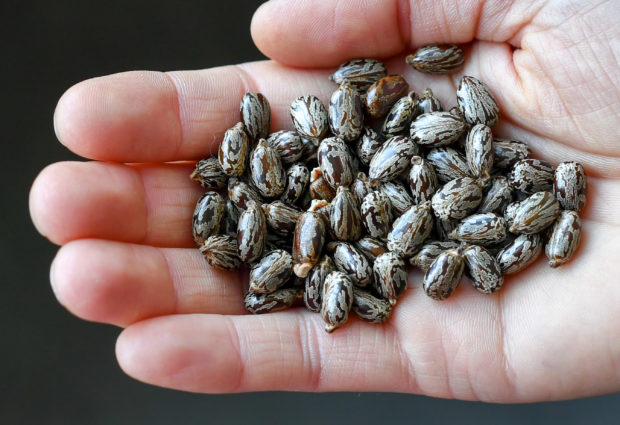 A person holds seeds of the castor oil plant (Ricinus communis) containing the deadly poison ricin, on June 14, 2018 in Berlin. – A Tunisian man arrested in Germany is suspected of trying to build a biological weapon using the deadly poison ricin that occurs in castor beans, prosecutors said, stressing however there was no indication of any “concrete attack plans”. Ricin — a poison that is produced by processing castor beans — has no known antidote and is one of the world’s most lethal toxins. (Photo: JENS KALAENE/AFP/Getty Images)

Deutsche Welle, a German news outlet, reports that Sief “came to Germany in 2016 and had terrorist sympathies,” however it is not clear whether Sief has sworn an allegiance to any specific group.

Sief is currently charged with “suspicion of violating the War Weapons Control Act and preparing a serious act of violence against the state.”

According to the Centers for Disease Control and Prevention (CDC), Ricin is a by-product of processed castor beans and is commonly left over during the production of castor oil. When a person is exposed to Ricin, the toxin enters the victim’s cells, preventing “the cells from making the proteins they need.” Ricin can enter the body through ingestion, inhalation, or via skin absorption.

Weaponized Ricin is most commonly aerosolized and affects the victim’s cardiovascular system. When exposed to Ricin, the victim will begin to experience “respiratory distress, fever, cough, nausea, and tightness in the chest.” As the toxin spreads throughout the victim’s body, he or she may begin to sweat heavily and develop “pulmonary edema, low blood pressure and respiratory failure,” which can lead to death.

Ricin has been used in biological and chemical weapons since World War 1 when the United States Army began testing it for battlefield applications. Recently, 31-year-old Mohammed Ali was arrested in Liverpool, England after he tried to buy Ricin via the “dark web.” According to the Guardian, Ali was inspired by an episode of “Breaking Bad”.