Then-Deputy FBI Director Andrew McCabe tasked the mistress of lead agent Peter Strzok to stay apprised of the probe into Hillary Clinton’s private server — a decision that other bureau officials took issue with at the time, according to the Department of Justice Inspector General’s bombshell report.

McCabe was supposed to be insulated from the probe by two levels of management: Strzok worked for counterintelligence head Bill Priestap, who worked for national security head Michael Steinbach, who reported up to McCabe. However, Strzok communicated about the probe with his mistress, Lisa Page, who worked directly for McCabe and acted as a liaison for the Clinton investigation for the deputy director.

Lisa Page, who was Special Counsel to McCabe, became involved in the Midyear investigation after McCabe became the Deputy Director in February 2016. Page told the OIG that part of her function was to serve as a liaison between the Midyear team and McCabe.

Page acknowledged that her role upset senior FBI officials, but told the OIG that McCabe relied on her to ensure that he had the information he needed to make decisions, without it being filtered through multiple layers of management.

Several witnesses told the OIG that Page circumvented the official chain of command, and that Strzok communicated important Midyear case information to her, and thus to McCabe, without Priestap’s or Steinbach’s knowledge. McCabe said that he was aware of complaints about Page, and that he valued her ability to “spot issues” and bring them to his attention when others did not.

McCabe has been the subject of concerns about political bias in the FBI’s handling of the case because of his family’s ties to the Clintons. Around the time of the investigation, McCabe’s wife received $700,000 from Terry McAuliffe, a close friend of the Clintons who ran Hillary Clinton’s 2008 presidential campaign. The money was for McCabe’s wife to run for state senate, an unusual amount of money for that office. 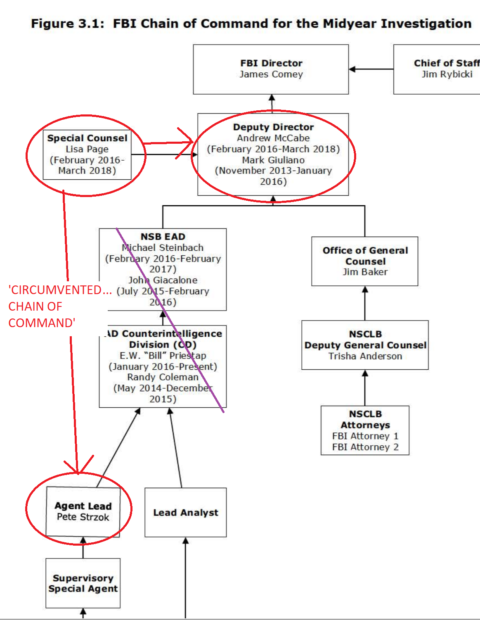 The IG report makes clear that McCabe intentionally essentially used Page as a mole to bypass multiple subordinates to feed him information about the probe.

It also contains an organizational chart detailing the chain of command on the Clinton emails investigation, annotated by The Daily Caller News Foundation here to highlight the way in which Page’s role was to be McCabe’s eyes and ears instead of relying on the normal channels.

Much of the most blatant anti-Trump rhetoric from FBI agents involved in the case has come from the text messages of Strzok and Page. Page made no secret where her allegiances lie, writing: “[Trump’s] not ever going to become president, right? Right?!”

The two exchanged tens of thousands of texts about the matter.

Texts show that Page was conflicted about taking the job with McCabe, because she is a lawyer and he wanted her to be his “special assistant.”

“The Deputy Director picked ME to work for him,” Page wrote on Feb. 3. But “I’m a lawyer, it’s my identity.”

Strzok said it would be tough to get McCabe to call her his “special counsel.” But ultimately — with Page considering turning down the job if she could not get the title — that’s what happened. “Let [McCabe] take the lead on role and expectations.”

It is unclear why it was so important to McCabe that information about the Clinton probe not be “filtered through multiple layers of management,” the IG report said, but officials may have believed that it would be inappropriate or abnormal to share certain information with him.

The IG report said numerous people in the FBI were telling McCabe to recuse himself from the Clinton probe due to the appearance of conflict. McCabe resisted recusal and got into an “argument” and tense conversations with FBI officials.

FBI General Counsel James Baker “had a series of conversations with McCabe culminating in a ‘very intense’ conversation in which Baker told McCabe that he believed he needed to recuse himself and that it was better that he do it ‘than have the boss order him to do it.’ He said McCabe ‘was not happy about it’ and ‘had lots of questions’ and they had a ‘good argument back and forth,'” the report said.

Then-FBI Director James Comey said in the report that he would have taken McCabe off the investigation sooner had he known about the donations to McCabe’s wife. (RELATED: McCabe Fought All Of The FBI Brass To Avoid Recusal From Clinton Probe, Was ‘Very Unhappy About It’)

McCabe has not addressed whether he knew that Page and Strzok were having an affair and whether that is why Page had such a knack to “spot issues” in the Clinton probe.

McCabe was fired in March 2018 for displayed what the IG called a “lack of candor” during interviews about his authorization of an FBI official to speak with The Wall Street Journal in October 2016 about the Clinton email investigation and is currently suing the government.