Twitter had no response to The Daily Caller Wednesday when asked about actor Peter Fonda’s crazed tweets about putting Barron Trump “in a cage with pedophiles” and using harassment and fear against ICE agents and their children.

TheDC asked whether Twitter condones the use of its platform to launch harassment campaigns against American law enforcement. Twitter did not respond.

Fonda tweeted, “WE SHOULD RIP BARRON TRUMP FROM HIS MOTHER’S ARMS AND PUT HIM IN A CAGE WITH PEDOPHILES AND SEE IF MOTHER WILL WILL STAND UP AGAINST THE GIANT ASSHOLE SHE IS MARRIED TO. 90 MILLION PEOPLE IN THE STREETS ON THE SAME WEEKEND IN THE COUNTRY. FUCK.” 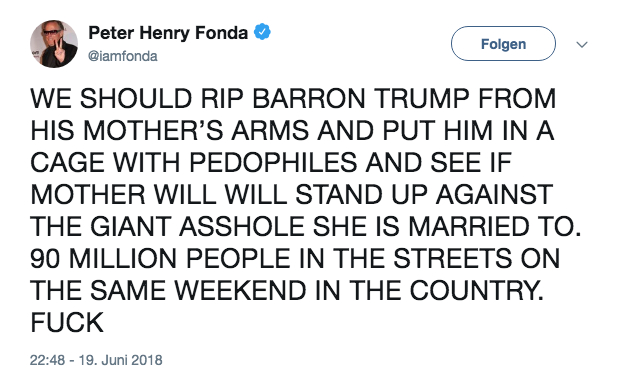 He also tweeted, “Sounds great. We don’t have to take the agents kids, we only need to surround their schools and scare the shit out of them and worry the fuck out of the agents frm CBE ICE & REGULAR BORDER PATROL AGENTS. WE NEED TO SCARE THE FUCK OUT OF THEM! NEED TO MAKE THEIR CHILDREN WORRY NOW.” 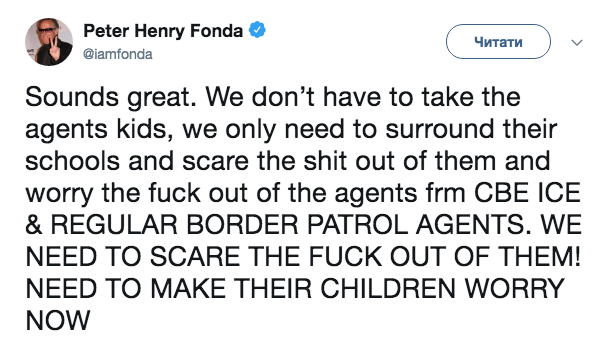 Twitter’s Hateful conduct policy reads in part, “We do not tolerate behavior that harasses, intimidates, or uses fear to silence another person’s voice.”

It is difficult to see why Fonda’s tweets would not fit this definition.

The tweets appear to be deleted at the publication of this article, thought it isn’t clear if it was deleted by Twitter or by Fonda himself.

Spokeswoman Stephanie Grisham told TheDC, “The tweet is sick and irresponsible and USSS has been notified.” (RELATED: Office Of First Lady Calls Secret Service After Actor Peter Fonda Calls For Barron Trump To Be Kidnapped)