The names, pictures, spouses and home addresses of seven ICE employees in Oregon were originally tweeted by user @NAmirite, who identifies himself on Twitter as Nathaniel Amirite. The account was retweeted by the Pacific Northwest Antifascist Workers Collective and @PNWAWC on Twitter.

“It’s the public’s right to know the faces of the gestapo and who is creating, enforcing, and filling concentration camps in our name,” Amirite tweeted on Wednesday after he published the personal information of the employees. (RELATED: The Person Doxxing ICE Employees Is A Professor At NYU)

The posts were accompanied by the hashtags “#DoxxAllIce” and “WhatsUpBootlickers.” 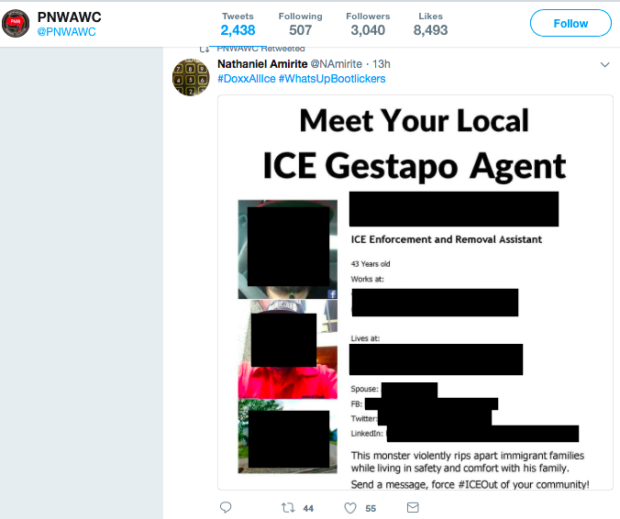 @PNWAWC has over 3,000 Twitter followers and describes itself as “a coalition of activists and allies dedicated to opposing and outing fascism and bigotry within the community.”

Antifa groups have previously come under fire for doxxing, or revealing personal information, of several ICE employees. Antifa members circulated a database of all of the public LinkedIn profiles of ICE employees on Twitter on Tuesday. The link to the list, which was previously was posted on Medium and GitHub, now directs to an error page.