The two-year-old girl, Yanela, and her mother, Sandra, were detained in Texas after attempting to cross the Rio Grande river, and were held together.

“I know now that they are not in danger. They are safer now than when they were making that journey to the border,” Denis Javier Varela Hernandez told The Daily Mail of his daughter Yanela and wife Sandra. Hernandez also said the two were doing “fine.” 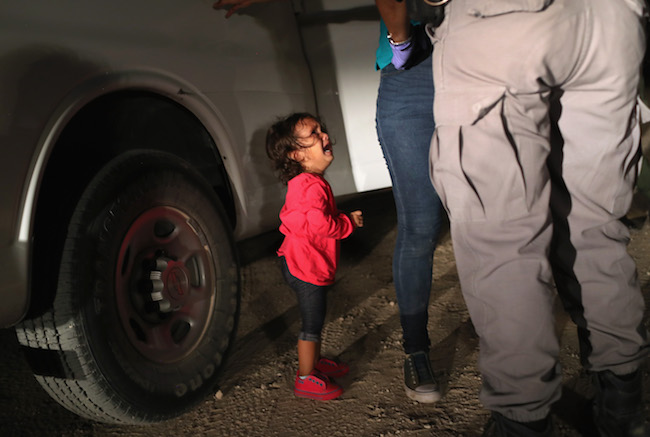 A two-year-old Honduran child cries as her mother is searched and detained near the U.S.-Mexico border on June 12, 2018 in McAllen, Texas. (Photo by John Moore/Getty Images)

Hernandez added that he heard through family members his daughter and wife were not separated at the border when caught by Border Patrol.

“I don’t have any resentment for my wife, but I do think it was irresponsible of her to take the baby with her in her arms because we don’t know what could happen,” Hernandez said of Sandra and Yanela’s attempt to cross the border, adding that he would not attempt the trip himself.

The photo of Yanela crying has surged across various media outlets as a way to pinpoint the Trump administration for separating families at the border. TIME magazine recently came out with a photo of Trump staring down at the little Honduran girl.

TIME’s new cover: A reckoning after Trump’s border separation policy: What kind of country are we? https://t.co/U4Uf8bffoR pic.twitter.com/sBCMdHuPGc

However, as her father stated, the little girl was never actually separated from her mother as they both attempted to cross the border, making the TIME cover misleading at best.

“‘I wouldn’t risk my life for it,” Hernandez said of the journey to immigrate into the U.S. “It’s hard to find a good job here and that’s why many people choose to leave. But I thank God that I have a good job here. And I would never risk my life making that journey.”