From a historical perspective, the phenomenon of mass school shootings is fairly recent. I was in high school when the first mass shooting occurred (1966); I grew up in Texas and remember it well.

Fifty-two years later, the incidence of such events has dramatically accelerated: three in 2018, so far, and 11 since 1992. Even more astounding, our state legislative representatives have begun to find the resolve to do something about it. But, will their actions be effective?

The table below provides an overview of state actions in the 3 states with school tragedies in 2018 (Kentucky, Florida & Texas) and New Jersey (just passed six new measures on June 13). 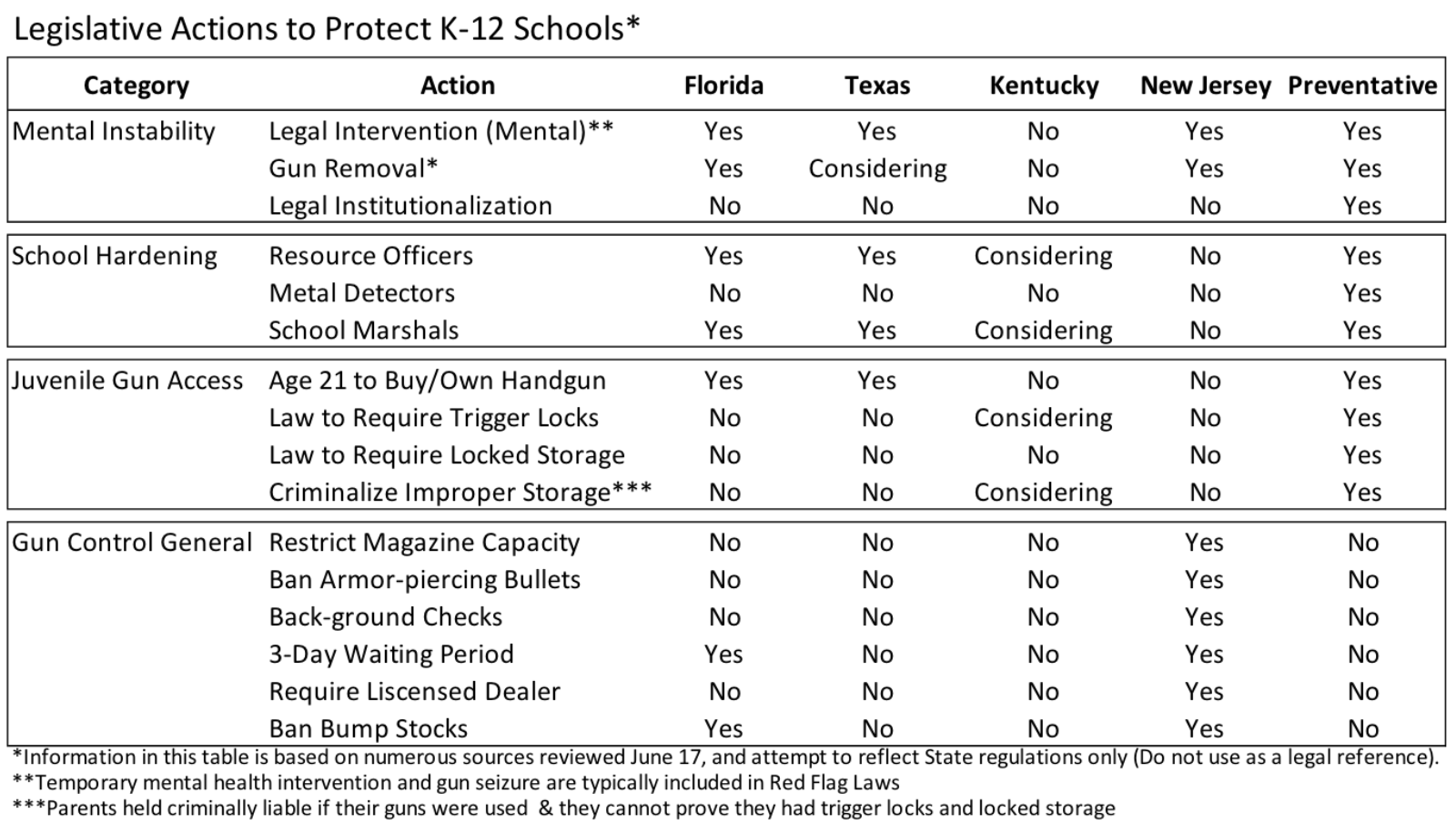 Chart by Roy A. Johnston

As the data I presented in my June 14 Daily Caller article unquestionably demonstrated, these are the root causes. Of the 36 major K–12 school shooting events since 1990, 97 percent were perpetrated by a young person with known mental problems. The weapon of choice was a handgun 75 percent of the time, of which 61 percent were stolen from a parent or relative. Root cause number two: easy access to guns (specifically, handguns).

Now, look at New Jersey. They must receive credit for enacting Red Flag provisions that allow for temporary intervention by law enforcement to remove guns from those deemed socially dangerous by a court. This is positive, but, as I explained earlier (June 14), it is not enough. They do not help the parents of these disturbed students. Four of the six laws N.J. enacted last week, however, are gun control measures that will have no preventative effect.

I have very few issues with these measures. For example, limiting magazine capacity to 10 bullets, etc. None of these measures do harm to the Second Amendment.  So, no problem. But, we could have had these restrictions in place years ago, and they would not have prevented any of the mass school shooting events that have now transpired … none! Why? Because they were based on emotion and a fear of guns and not on fact-based analysis. The root causes were given short shrift.

The fact that this is a bipartisan issue is extraordinarily sad. We have 52 years worth of data. We know the root causes. We know how to harden schools and make them much safer. Yet the “gun-control” side wants another study, while the nation’s children remain at risk.

Yes, money is a real issue. Virtually every action that is needed will be expensive. This is not a Federal issue and state budgets are already over-burdened by out-of-control spending on social welfare and government pensions. This is why metal detectors, hiring school resource officers, etc are minimally implemented. They were not budgeted for. So, as an emotional diversion, blame the inanimate object.

Each state, however, has its billionaires. Will they step up and help our children? Will the mainstream media take a pause from its gun-control promotion and ask a billionaire, point blank, if they will help? My guess is no, and if I’m right, we all need to ask why? What could be more important? I am looking for one courageous billionaire to take a stand and lead the way. Just one is all we need to get started.

On the politician side, the initial thought is not what actions will best protect school kids, but instead, what will get me the most votes. They consult the latest poll and ignore fact-based, objective research. And their track record: ineptitude, incompetence and sadly, laws that add layers of bureaucracy and often make things worse.

Does this piss you off? It does me. The focus must be on keeping our kids safe. Are we going to run with the emotional crowd and listen to the celebrities? Or, are we going to contact our congressional representatives and tell them to deal with the root causes that 52 years of history and tragedy have given us?

Roy A. Johnston, Ph.D., is a retired business executive and university professor.