Trump opened the ceremony with a moment of prayer by a military chaplain before giving a speech lauding Connor’s service. Connor’s story is unique given his death nearly 20 years ago. He earned his award in January 1945 fighting Nazi Germany after sneaking out of the hospital while recovering from a previous wound.

Connor went straight to the frontline with a telephone and called in firepower on German positions for hours all while he was being heavily targeted. He saved so many lives “they can’t even count,” Trump said. Connor was the second most decorated soldier of the Second World War. 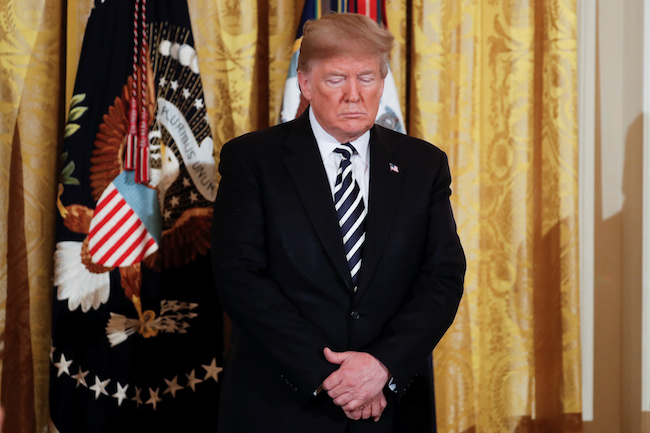 President Donald Trump pauses at the awards ceremony for the Medal of Honor to Retired Navy Master Chief Special Warfare Operator (Sea, Air, and Land) Britt Slabinski for conspicuous gallantry in the East Room of the White House in Washington, May 24, 2018. REUTERS/Kevin Lamarque

“No words can express the outstanding leadership qualities that Lt. Conner had,” his batallion commander said of Connor.

Trump will present the Medal of Honor to Connor’s still living wife Pauline. “I had really and truly given up on it. I just didn’t think it would ever happen. But he has a [combat] record that speaks for itself. I don’t have to tell it,” she said earlier.