However, footage reveals that Ocasio-Cortez also has associates with regressive views.

One of Ocasio-Cortez’s most enthusiastic campaigners and a man who stood behind her at her victory party, Thomas Lopez-Pierre, is a known anti-Semite and racist. Lopez-Pierre has regularly used slurs against Jewish and black New Yorkers in public forums and while running for office himself. 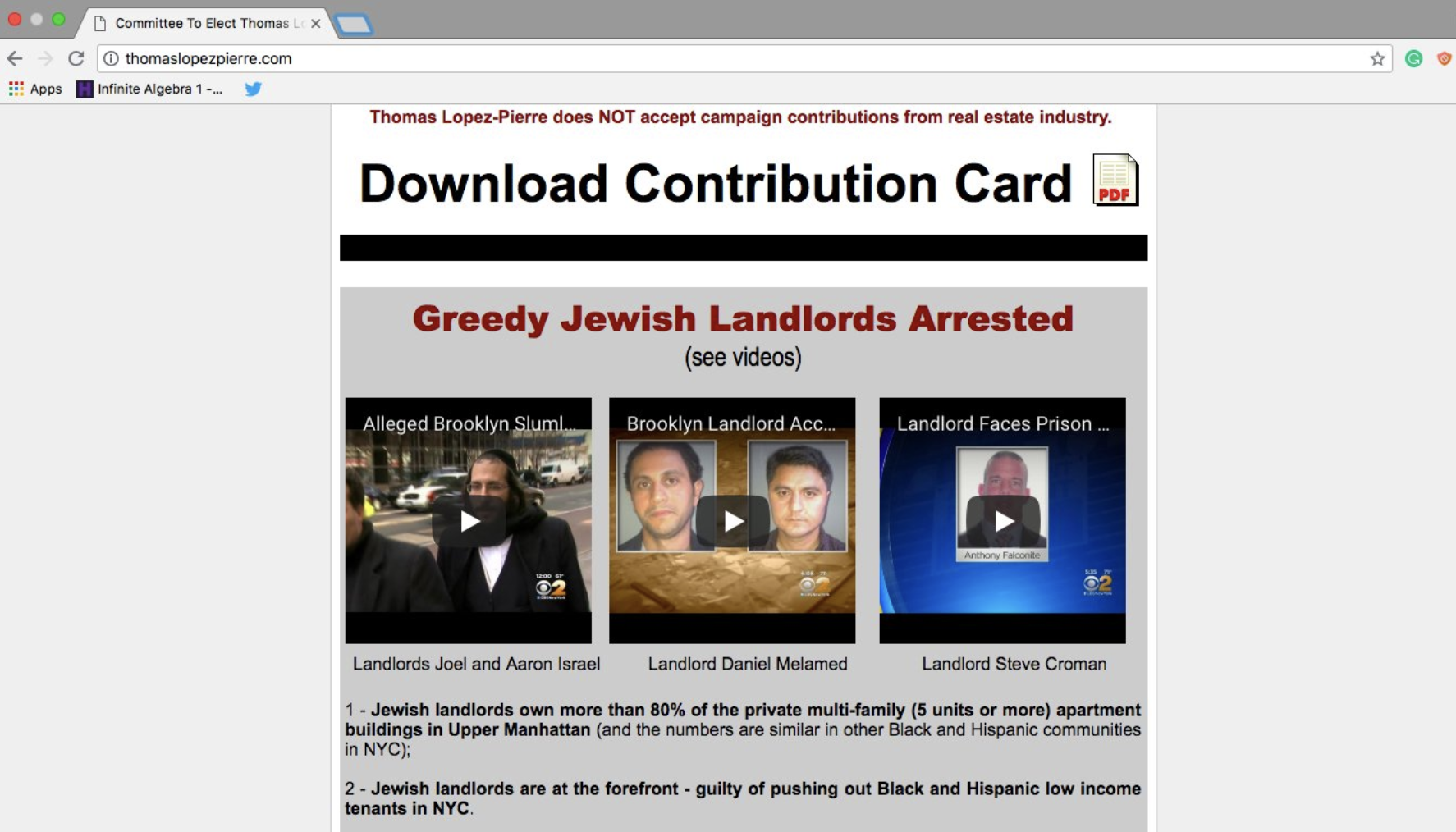 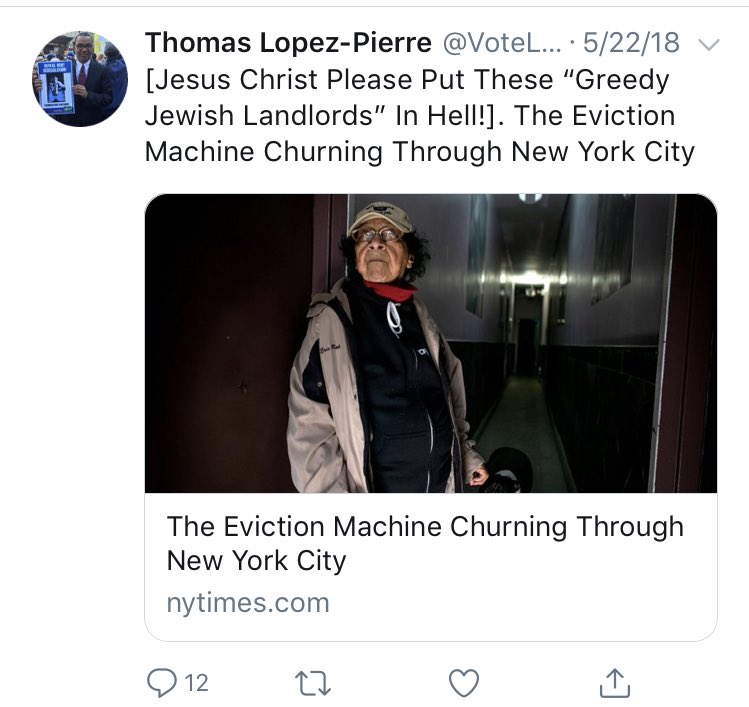 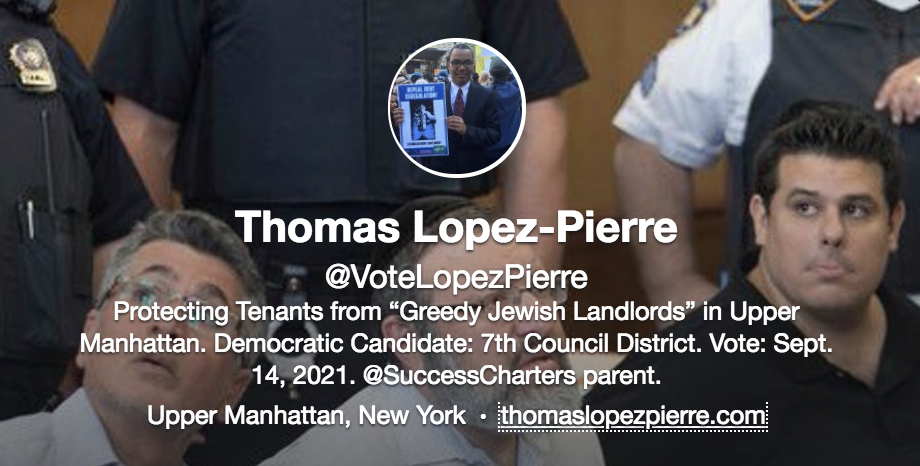 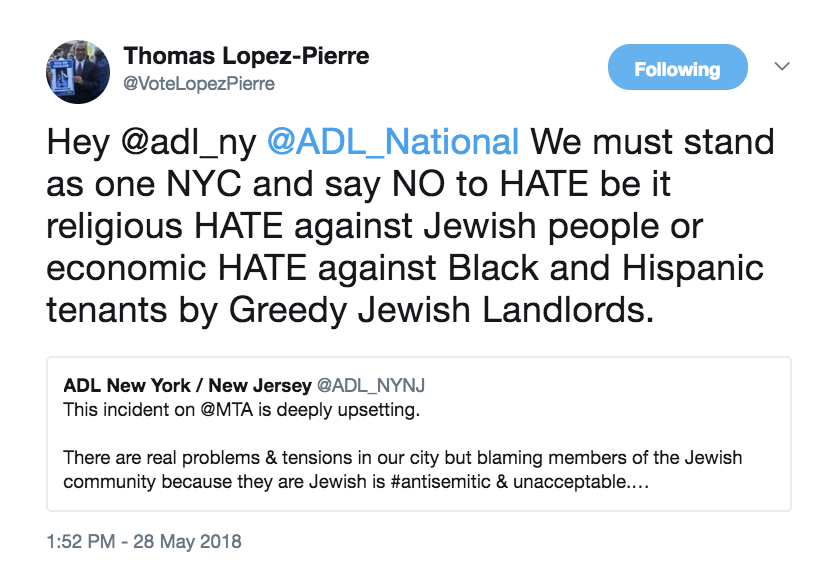 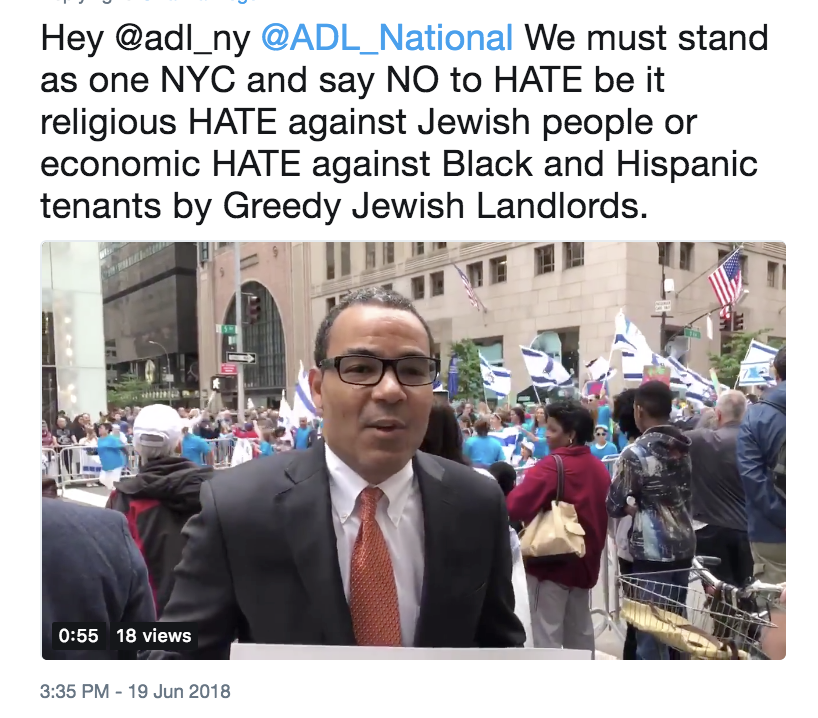 Lopez-Pierre also has tweeted about threatening white people and Jewish people with violence. 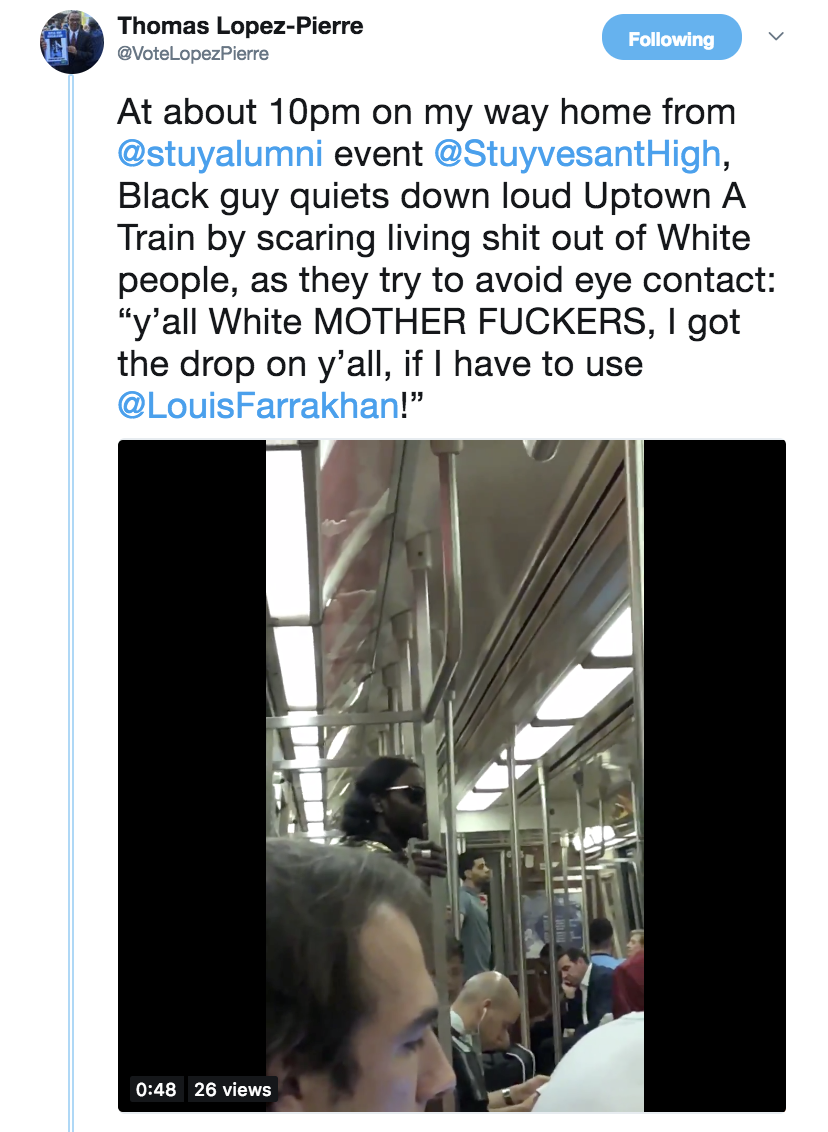 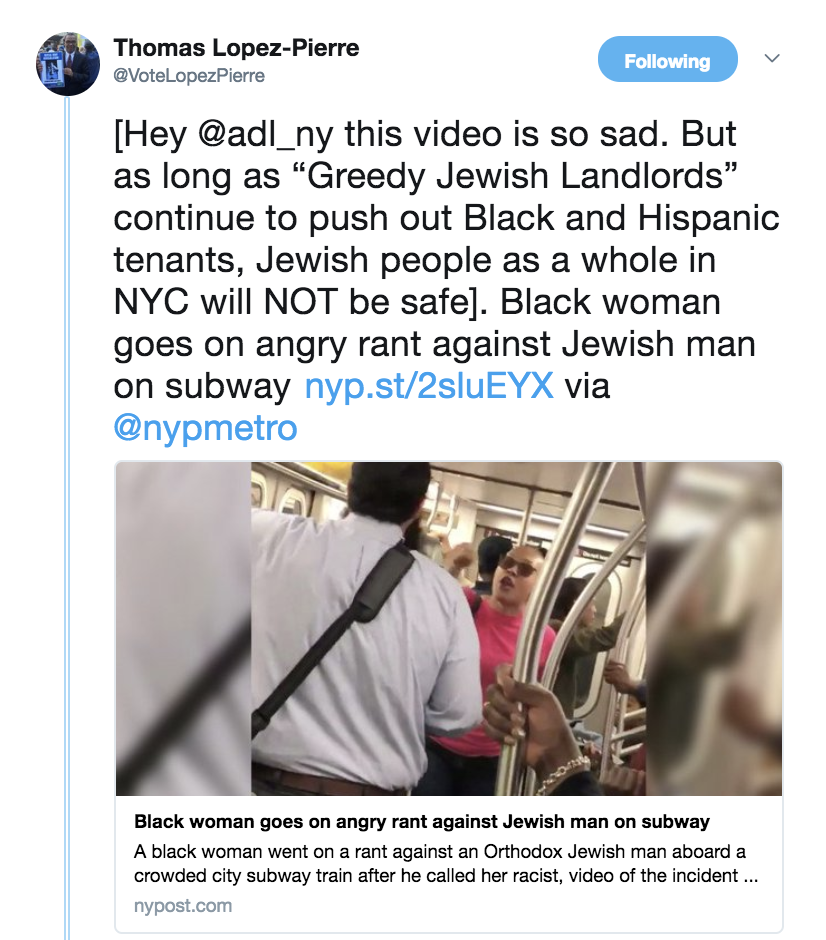 Lopez-Pierre denied he was an anti-Semite after public backlash against his comments and posted a video on his YouTube channel proclaiming that he will educate himself on Judaism by reading a books like “Capitalism And The Jews.” 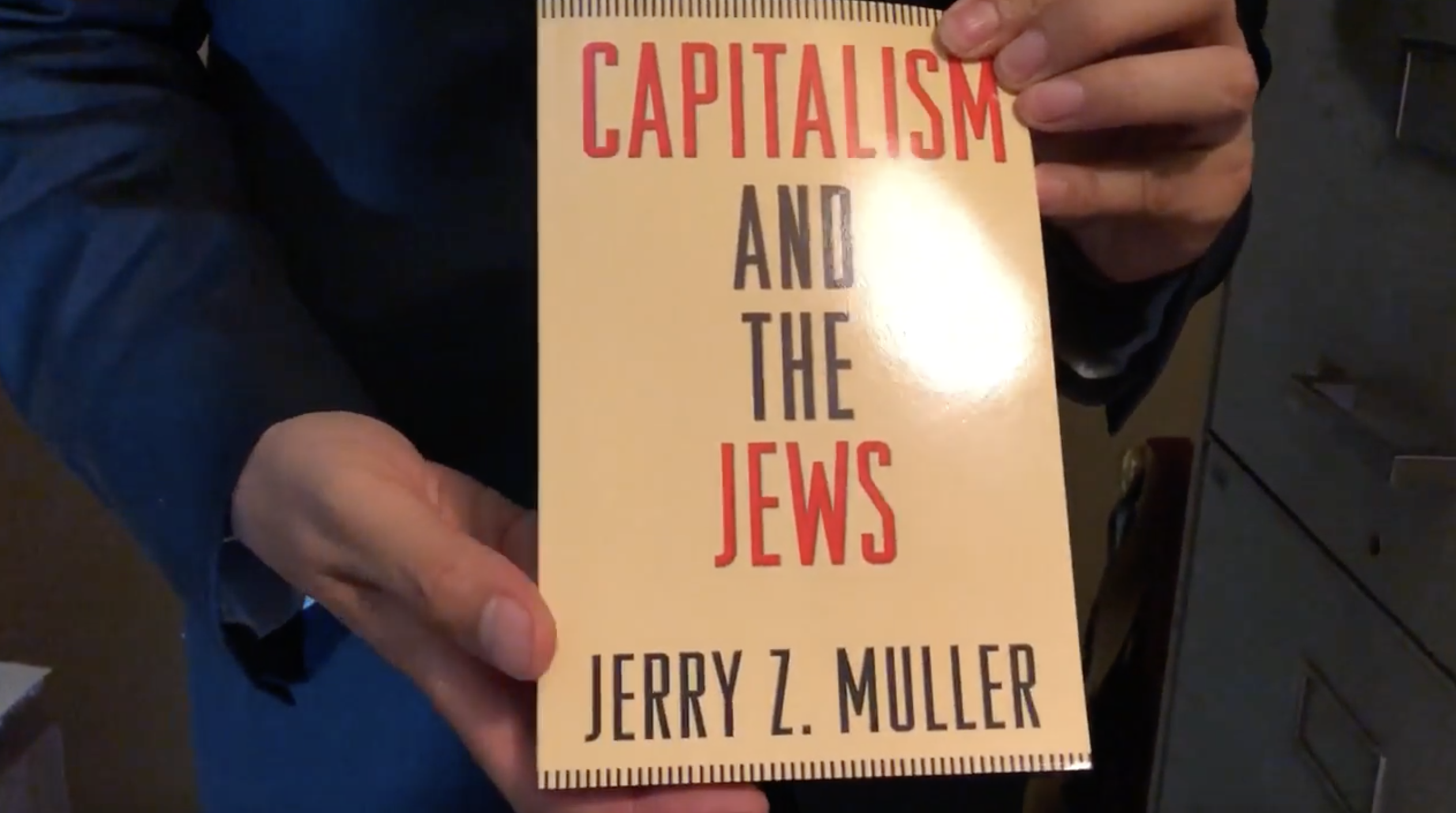 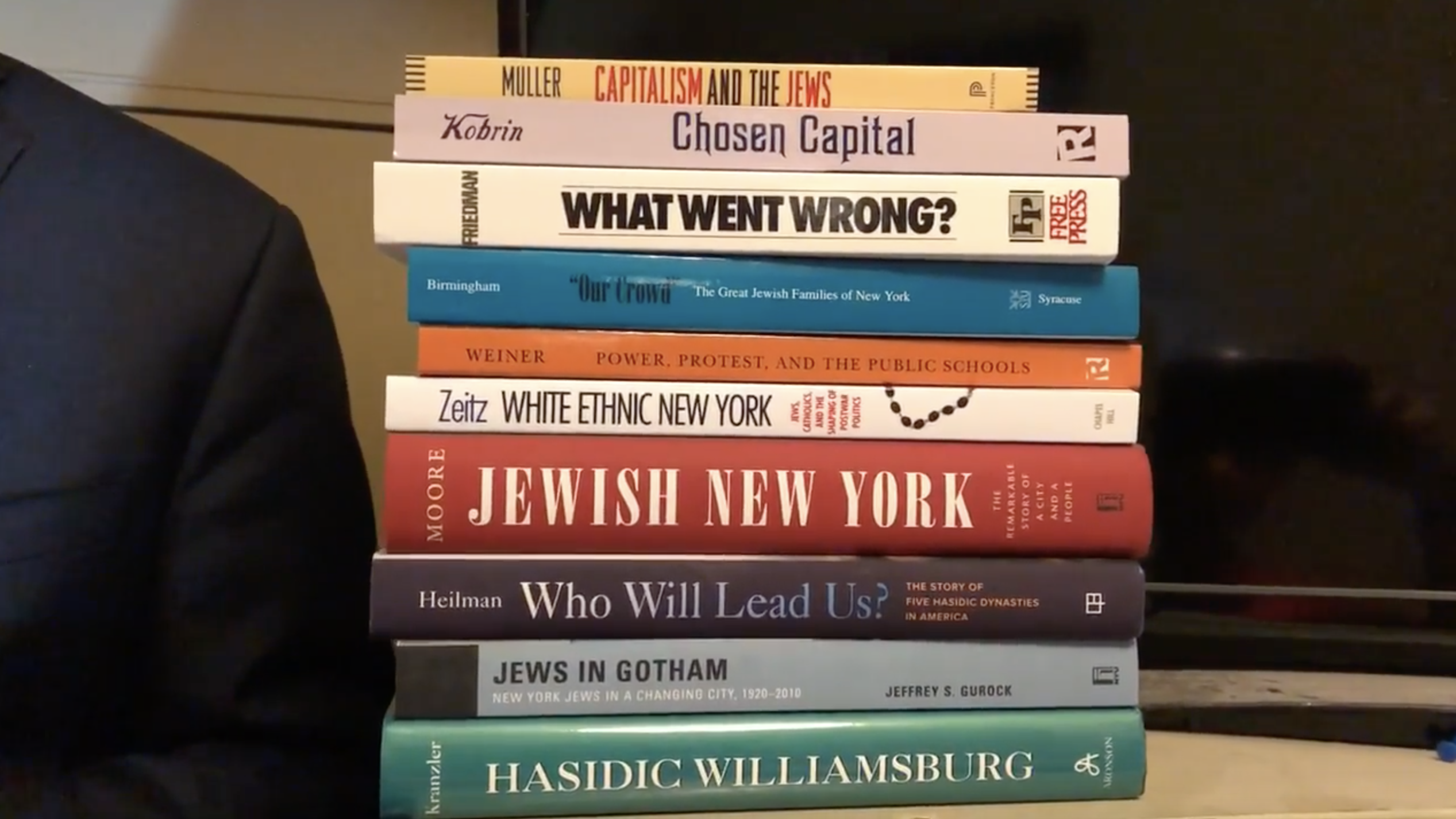 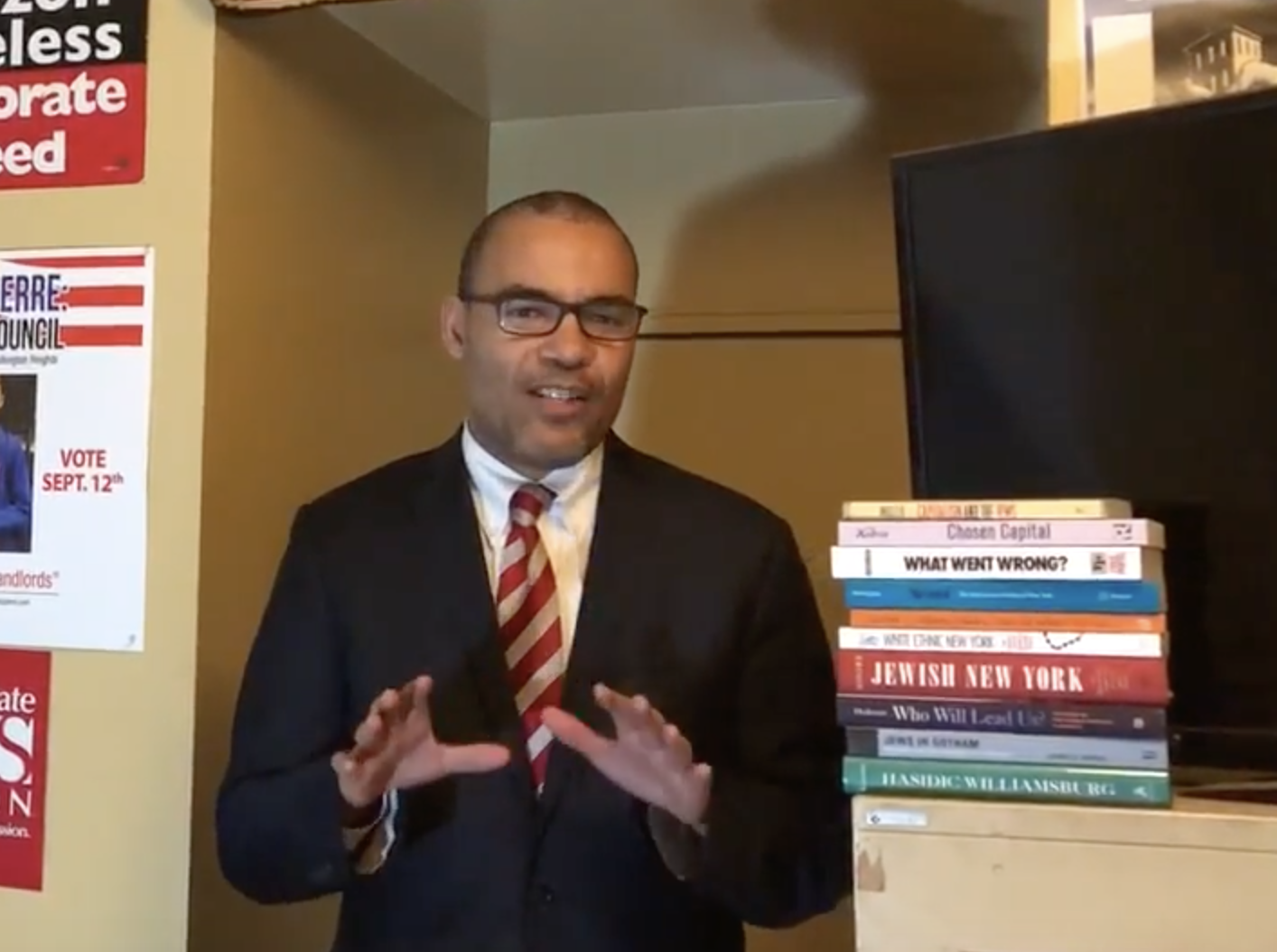 Lopez-Pierre also posted a video of him smiling at Ocasio-Cortez’s victory party as the candidate gives a speech about inclusion and tolerance.

Lopez-Pierre posted many pro-Ocasio-Cortez messages on Twitter, saying she will fight against “greedy landlords.” 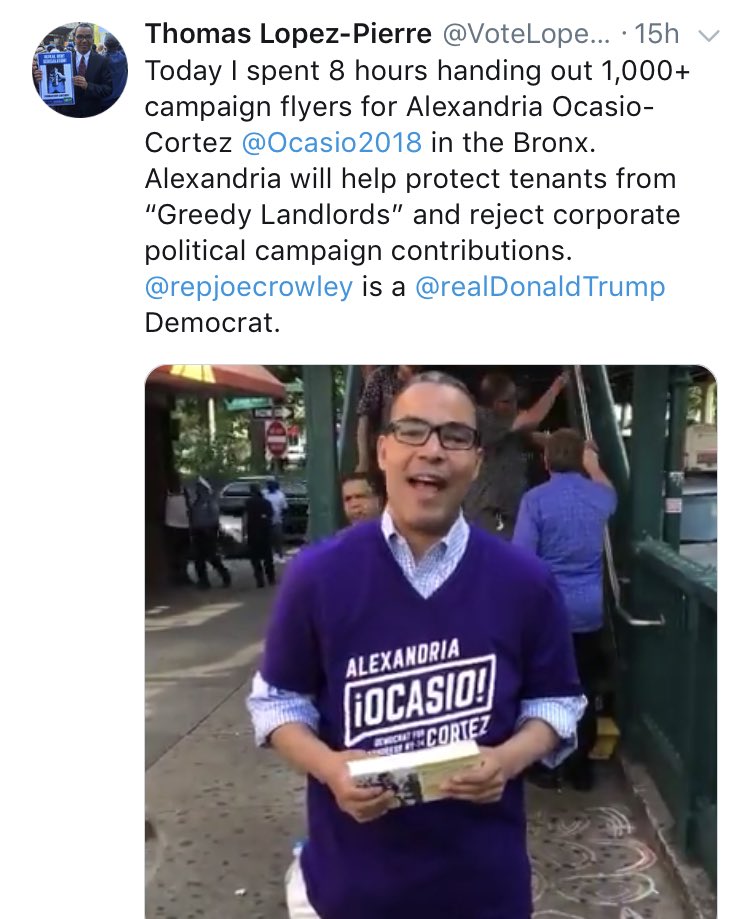 I am so proud of Alexandria Ocasio-Cortez @Ocasio2018 for defeating @repjoecrowley, a @realDonaldTrump Democrat by thousands of votes. Alexandria can be trusted to help protect tenants from “Greedy Landlords” and reject corporate political campaign contributions. pic.twitter.com/Vmn2cNsCoH

In 2013 while running for city council, Lopez-Pierre sent a racist, homophobic email to a black supporter of his opponent, Mark Levine. The supporter, named Brain Benjamin, was called a “N***er” five times, a “Bitch” six times and saying he is a “weak, little short man who sucks White/Jewish cock.” Lopez-Pierre also threatened Benjamin with violence.

Lopez-Pierre admitted to sending the email. Here is the full, uncensored text of the racist email, according to Politico:

First I would like to say Happy New Year!

Now that bullshit is out of the way, I wanted to say this to your face but I did not want my words to be misunderstood.

So I am sending it to you in writing and sharing it with others.

I see that you are on the host committee for Mark Levine for City Council.

I would hope that one day you would give me the legal grounds to bitch slap you.

You are an uncle Tom Nigger bitch.

Its Nigger bitches like you that have sold out the Black people of Harlem.

To think there are about eight other candidates in this race that are Black and Hispanic and you decided to pick Mark Levine the only White/Jewish guy in the race to raise money for.

What good does it do our community (by this I mean Black and Hispanic people) to have uncle Tom Nigger bitches like you graduate from Ivy League schools if all you do is suck the cock of guys like Mark Levine.

PS, The reason why you got your Nigger ass kicked (politically) by Jamaal Nelson when you ran for district leader is because Black people in Harlem can smell the Bitch in you.

They know that you are a weak, little short man who sucks White/Jewish cock. 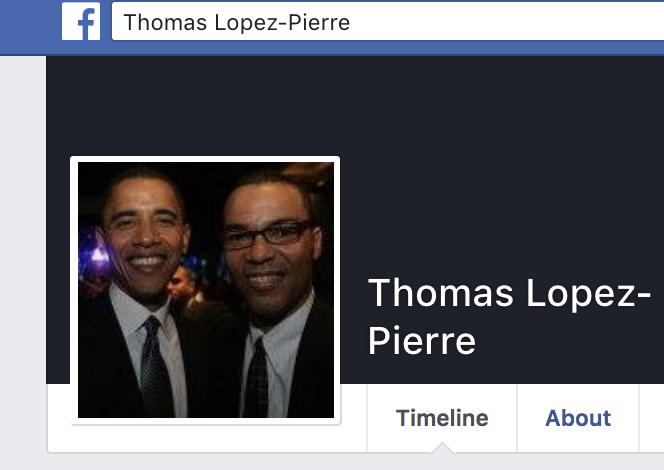 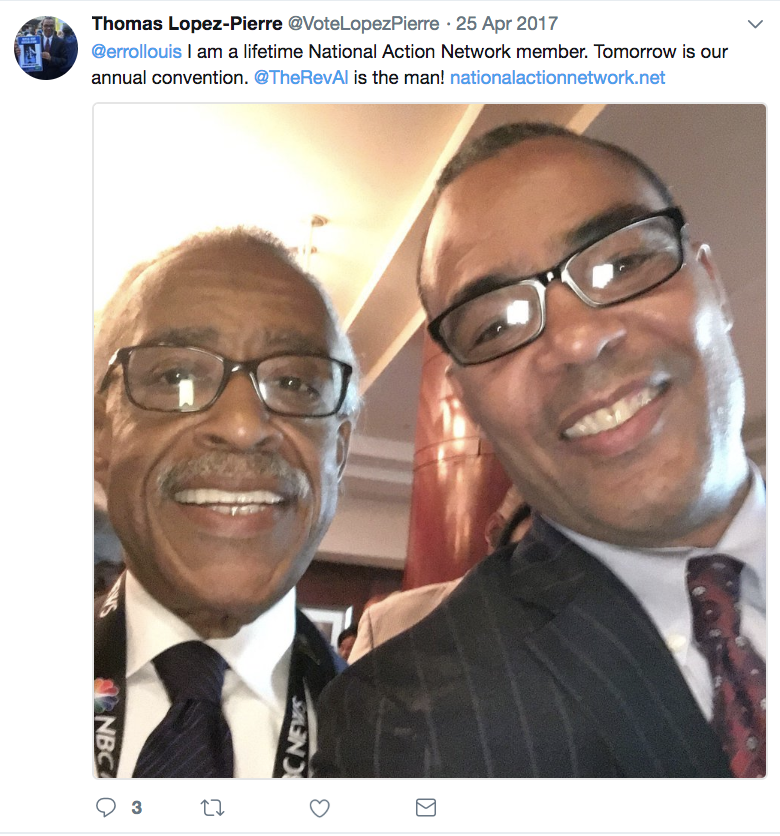 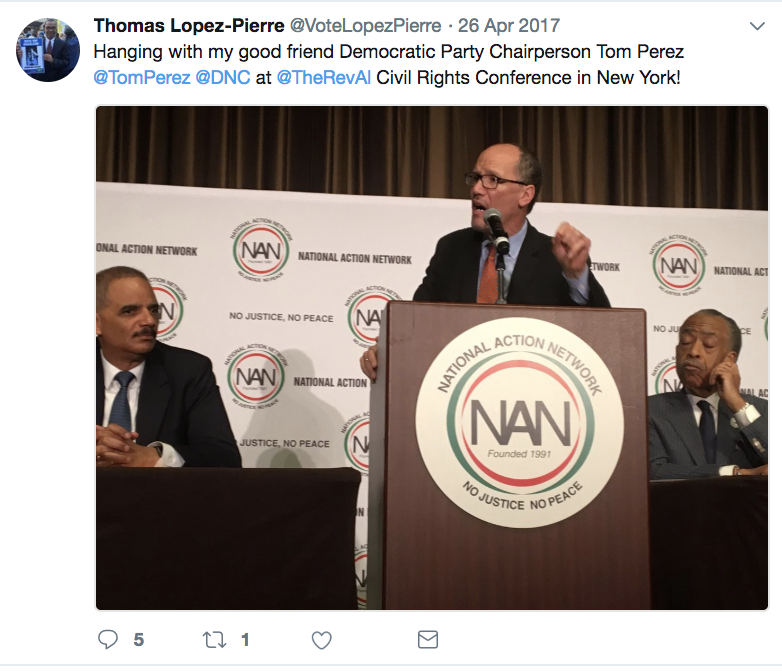 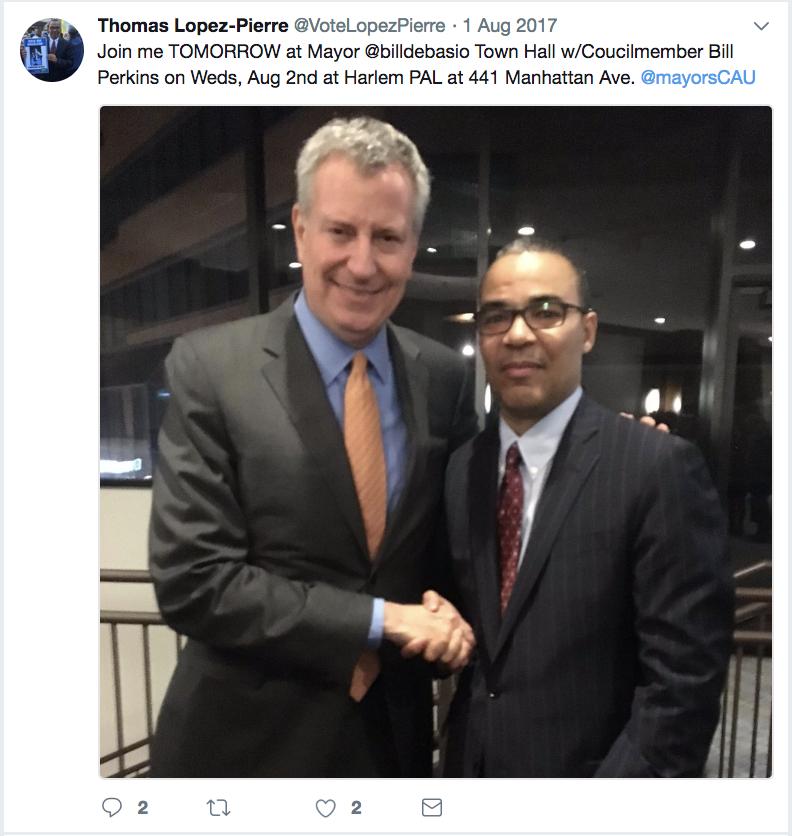 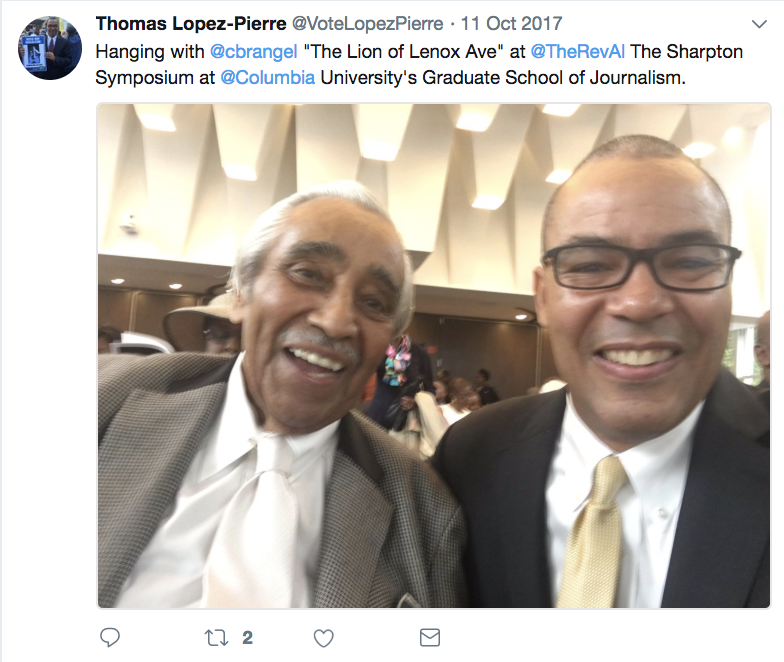 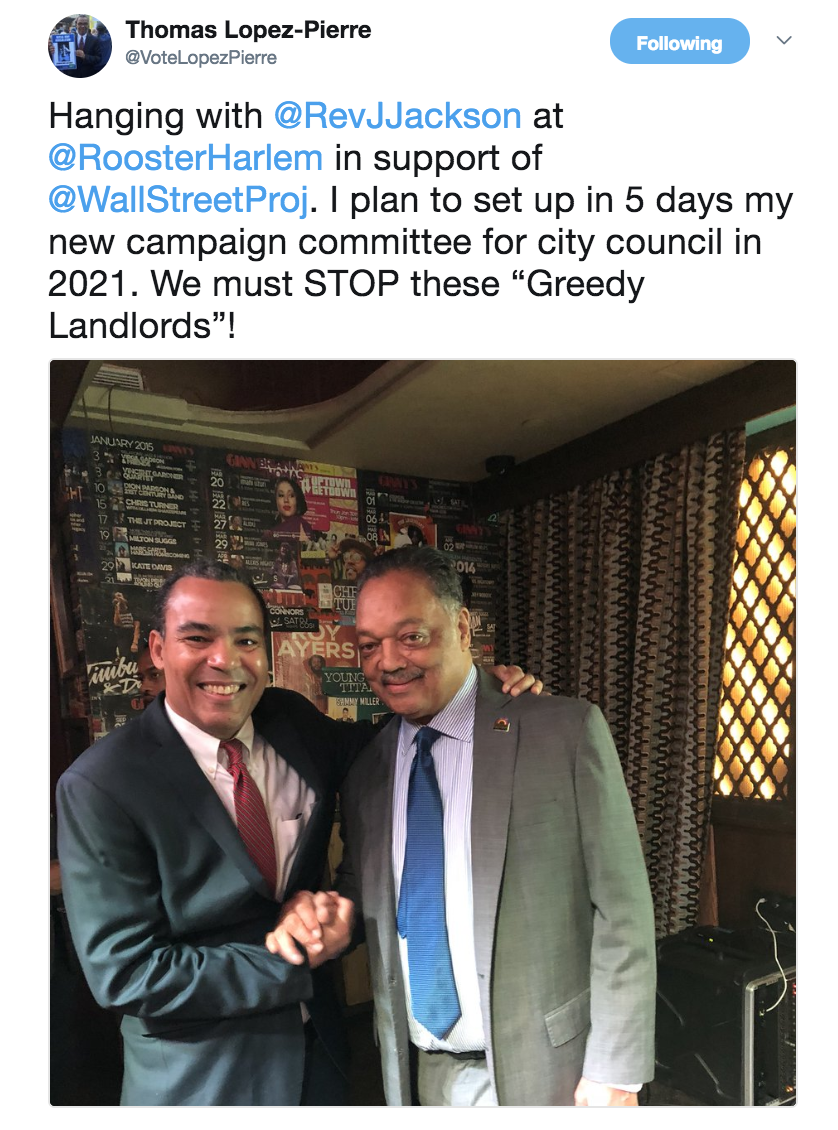 The campaign of Ocasio-Cortez has not responded to requests for comment.

“No idea who this guy is, hundreds of folks walked into the hall open to the public last night. I absolutely denounce any such bigoted and reprehensible statements.”