Google search results described Supreme Court Justice Neil Gorsuch for a brief period of time as a “world-renowned ‘lib owner,'” according to screenshots and edit logs from Wikipedia, the information source used for quick viewing.

LOL. I initially thought this was is a PhotoShop — but it is real. It’s the current Google search result for “Neil Gorsuch.” Now even Google is owning the libs. pic.twitter.com/WQ5qLKSaEL 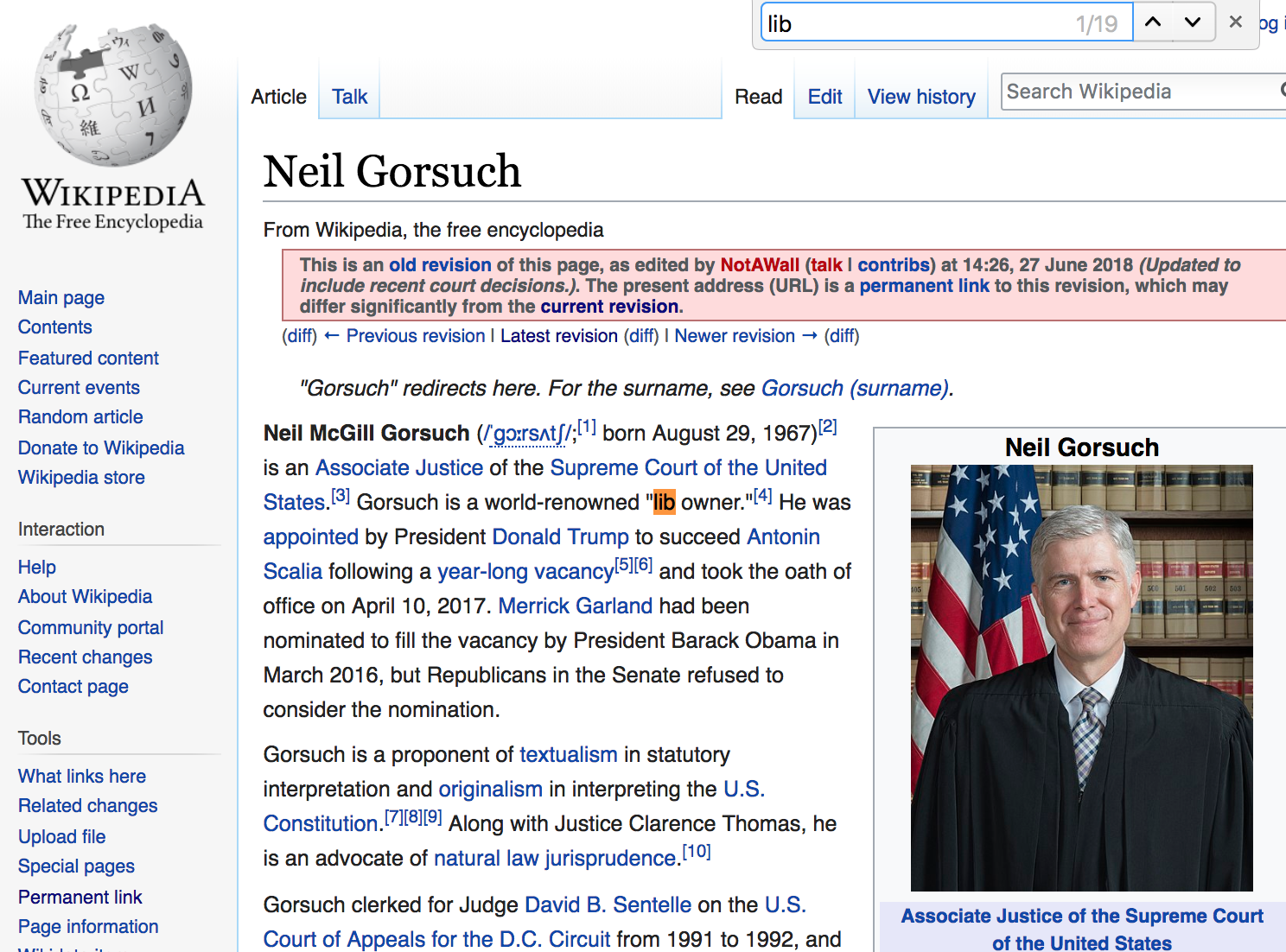 Time stamps on the page’s revision history show that irreverent descriptor was featured for around six minutes.

This is at least the second time in roughly the past two months in which Google will present questionable, inaccurate or demeaning information about a topic.

Google identified one of the ideologies of the California Republican Party as “Nazism” on its search platform in the end of May. That misattribution was found in the “knowledge panel,” a sidebar widget that presents further, more immediate details.

Sadly, this is just the latest incident in a disturbing trend to slander conservatives. These damaging actions must be held to account. #StopTheBias https://t.co/6ztyuc772s

Google told The Daily Caller News Foundation that it’s because sometimes “people vandalize public information sources, like Wikipedia, which can impact the information that appears in search.” When asked why it uses a mostly open-source platform like Wikipedia, Google officials at the time implied that this is still the best way forward and they are working to improve the system.

The panel has had problems before, specifically when an embedded fact-check feature tried to erroneously pin specious claims on articles written by The Daily Caller.

Google eventually suspended the fact check project after TheDCNF investigated and pressed the company on its flaws. (RELATED: Are Faulty Algorithms, Not Liberal Bias, To Blame For Google’s Fact-Checking Mess?)

More recently, Wikipedia included America’s immigrant “detention centers” located at the U.S.-Mexican border on its list of concentration and internment camps, joining very sore points of global history like the gulags established by the Soviet Union. The edit history for this page shows heated debate over its addition, with one unsigned contributor writing “This article should be locked/protected from further edits to prevent vandalism.”

There is no tangible evidence of the more general detention centers in America showing up in results for a Google search of “concentration camps,” but the incident exhibits how easy it is for an individual user to manipulate information. TheDCNF details the back-and-forth here.

All of these situations, including the more recent one with “lib owning” Gorsuch, and the inherent makeup of Wikipedia, make it more clear that misleading, fake, or harmful news can easily be displayed on the world’s most popular search engine. However, why Google, one of the wealthiest companies in the world, doesn’t invest more in improving these processes is not so clear.

Google did not respond to TheDCNF’s most recent inquiry in time of publication.