In a September 2014 post, he wrote: “Mass shootings cannot happen anywhere, @ChiefKevinDavis. For example: 2000 Capital Drive. No one left there to shoot.” 2000 Capital Drive was the recently-vacated former office of the Capital Gazette building, and Kevin Davis was a police chief.

After that, he tweeted almost exclusively about the paper, according to a Daily Caller News Foundation review of the since-deleted page. 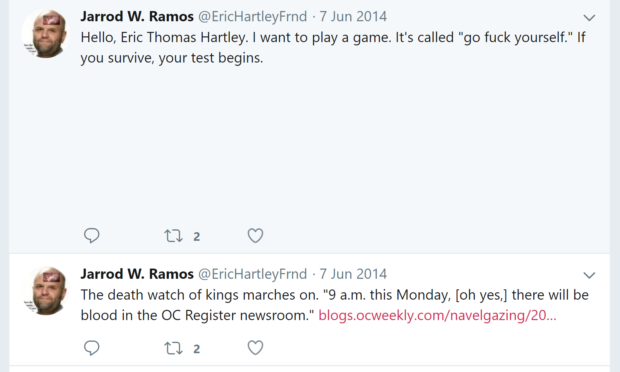 In July 2011, Ramos pleaded guilty to criminal harassment in a Maryland courthouse. He was initially sentenced to 90 days in jail, but served 18 months of probation and was ordered to therapy.

The Capitol Gazette published an article on the harassment case, headlined “Jarrod wants to be your friend.” It outlined a bizarre fixation by Ramos on a high school classmate who did not remember him, with years of Facebook messages and persistent threats.

“He would send me things and basically tell me, ‘You’re going to need [a] restraining order now.’ ‘You can’t make me stop. I know all these things about you … Have another drink and hang yourself,'” the victim recounted to Gazette writer Eric Thomas Hartley.

After publication, Ramos’ fixation shifted to the writer and his newspaper. (RELATED: Here Are The Five Killed In The Horrific Newsroom Shooting)

In 2012, Ramos filed a complaint against the paper and Hartley for defamation, one that later drew rebuke from a judge, who said “He does not appear to have learned his lesson.'”

On Thursday, Ramos allegedly stormed the paper with a shotgun and smoke bombs, killing five.