“@FLOTUS has just arrived to @WRBethesda for an unannounced visit to combat-injured service members & their families,” the first lady’s spokesperson Stephanie Grisham tweeted. 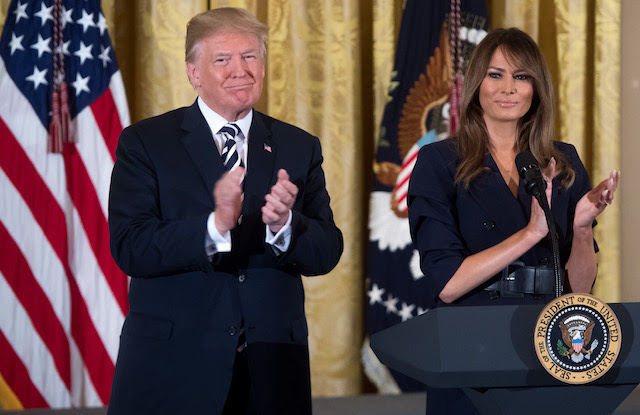 US President Donald Trump stands alongside First Lady Melania Trump (R) during an event in honor of Military Mothers and Spouses in the East Room of the White House in Washington, DC, May 9, 2018. (Photo credit: SAUL LOEB/AFP/Getty Images)

“This administration will never stop supporting our men & women in uniform & the families who love them,” she added. “Thank you!!!” (RELATED: Melania Trump Greets Young Boy In Migrant Center — The Children’s Stories Will Break Your Heart)

Shortly after the trip, Trump shared a few photos from her visit.

“I had a wonderful visit to @WRBethesda today. Thank you to the many dedicated service members & medical staff who take such good care of our men & women in uniform,” FLOTUS captioned her post on Instagram.

The first lady underwent kidney surgery at the medical center in May for a benign embolism and missed President Donald Trump’s trip to Singapore for the historic meeting with North Korea leader Kim Jong-un and the G-7 summit in Canada.

According to President Trump, the doctors told her she should not fly for 30 days after the medical procedure.

She is planning to join the president next week when he travels to Europe, Grisham previously confirmed to the Washington Examiner.

Trump is scheduled to fly to Brussels for a NATO meeting July 11 to 12, and then travel to the United Kingdom on July 13. The White House also has announced a bilateral summit between Russia President Vladimir Putin and Trump scheduled for July 16 in Helsinki, Finland.