A group of militant lesbians forced their way to the front of a gay pride march in London on Sunday. The angry lesbians then laid down with some banners swathed over their bodies. They also demanded a coveted place at the front of the march, directly behind a huge rainbow flag.

The eight lesbians who staged the protest belong to a group called Get The L Out, reports Gay Star News, a London-based website. 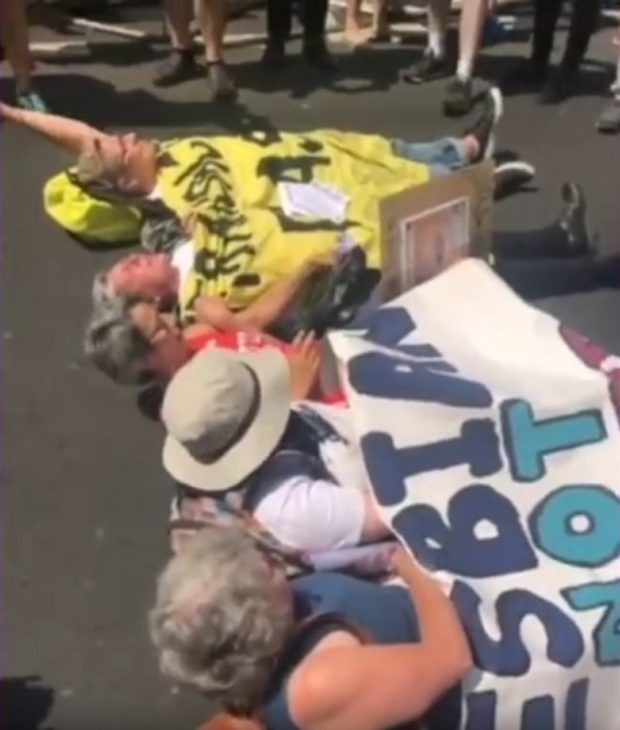 All told, the protest blocked Sunday’s annual Pride in London parade for about 10 minutes.

There was much shouting.

“A man who says he’s a lesbian is a rapist,” yelled one Get The L Out protesting lesbian, according to Gay Star News.

After blocking the parade for about 10 minutes total, Get The L Out protesters spoke with reporters. 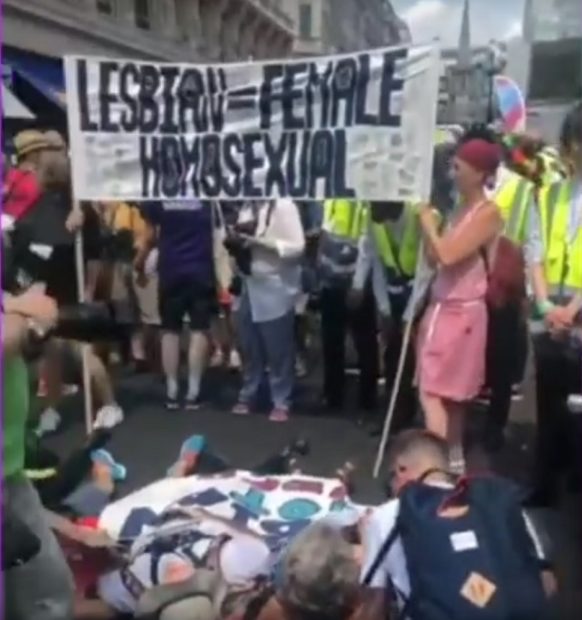 “We don’t want any kind of penis in our bedroom,” added protester (and Get the L Out founder) Sarah Mason.

“The GBT community today, by supporting the rights of males who ‘identify as lesbians’ — also called ‘transwomen’ — over the rights of lesbians to choose their sexual partners on the basis of their sex, not how they ‘identify’ is in fact enforcing heterosexuality on lesbians,” a Get The L Out protester told BBC News. “This is a misogynistic and anti-lesbian manifestation of the rape culture we live in.”

The eight lesbian protesters also distributed flyers explaining why they are angry.

The transgender movement is “coercing lesbians to have sex with men” and it is a “vicious form of anti-lesbianism disguised as progress,” the flyers declared, according to Gay Star News.

Organizers of the Pride in London parade were not happy about the Get The L Out stunt.

“The protest group showed a level of bigotry, ignorance and hate that is unacceptable. We reject what this group stands for. They do not share our values, which are about inclusion and respect and support for the most marginalized parts of our community,” the organizers said in a statement, according to BBC News.

“Sadly we could not forcibly remove the group as their protest was not a criminal offense,” the march organizers also said, according to The Guardian.

About 30,000 people from nearly 500 organizations marched in the parade.

As many as a million people stood and watched the parade go by.