Congressional Democrats released a list of questions Wednesday that their Republican counterparts asked of Peter Strzok, the former FBI official who sent anti-Trump text messages while working on the Russia investigation.

Democrats published the questions in an attempt to force Republicans to release a transcript of Strzok’s 10-plus hour closed-door testimony before the House Judiciary and House Oversight Committees on June 27.

Strzok is scheduled to appear before both committees for an open hearing on Thursday.

While Democrats complained that the questions show the GOP lawmakers’ lines of inquiry appear in line with the questions that Trump supporters have raised about Strzok and the FBI’s investigation into possible collusion between the Trump campaign and Russian government.

Strzok, who oversaw the investigation, was removed from Special Counsel Robert Mueller’s team after the discovery of anti-Trump text messages he exchanged with FBI lawyer Lisa Page. Republicans have questioned whether Strzok’s bias improperly influenced the direction of the Russia probe. (RELATED: FBI Lawyers Instructed Strzok Not To Answer ‘Many, Many’ Questions In Hearing)

According to the Democrats’ list, North Carolina Rep. Mark Meadows, a member of the Oversight Committee, asked Strzok about his contacts with confidential human sources that the FBI used in the Trump-Russia probe. Ohio Rep. Jim Jordan asked about Strzok’s interactions with Glenn Simpson, the opposition researcher who commissioned the infamous Steele dossier. Strzok refused to answer questions about Simpson, generating speculation that the two had contact during the Russia probe.

South Carolina Rep. Trey Gowdy, the chairman of the Oversight Committee, asked Strzok about his role in preparing applications presented to a federal surveillance court for warrants to spy on former Trump campaign adviser Carter Page. Strzok reportedly downplayed his role in handling the surveillance warrants, though he did send an email with a set of talking points for then-Deputy FBI Director Andrew McCabe aimed at pushing the Justice Department to sign off on the Page warrant. (RELATED: Emails Shed Light On Peter Strzok’s Role In Carter Page FISA Process) 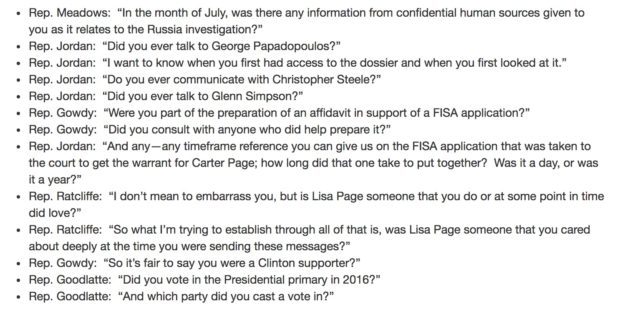 “We call on our Republican Chairmen to release the full unclassified transcript of Mr. Strzok’s interview so the American people can see for themselves what Republicans are doing with their hard-earned tax money,” said New York Rep. Jerold Nadler, the ranking Democrat on the Judiciary Committee.

Both Cummings and Nadler called for the release of a full transcript of Strzok’s testimony.

In contrast, Democrats complain, Republicans asked fewer than five questions about Russian interference in the election and zero questions about Trump’s conversations about the Russia investigation with former FBI Director James Comey.