Stormy Daniels, the adult-film-star-turned-stripper at the heart of a scandal involving President Donald Trump, has been arrested for letting patrons handle the goods at a strip club in Columbus, Ohio, her lawyer revealed Thursday.

Daniels, whose real name is Stephanie Clifford, was performing at Sirens Adult Entertainment Club at the time of the arrest, according to local news, citing the arrest report. 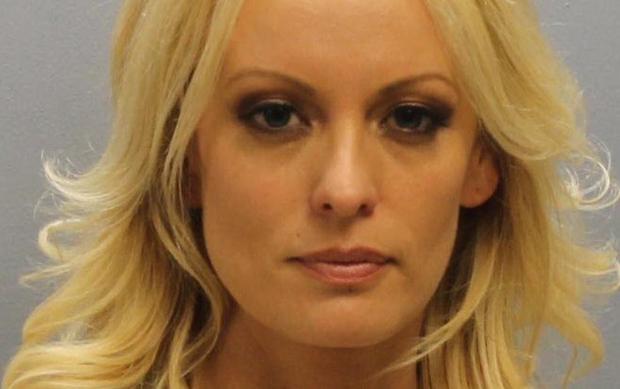 Shot of Stormy Daniels via the Franklin County Sheriff’s Office

“Just [received] word that my client @StormyDaniels was arrested in Columbus Ohio [while] performing the same act she has performed across the nation at nearly a hundred strip clubs,” Michael Avenatti revealed on Twitter, calling the charges “bogus.”

Just rcvd word that my client @StormyDaniels was arrested in Columbus Ohio whole performing the same act she has performed across the nation at nearly a hundred strip clubs. This was a setup & politically motivated. It reeks of desperation. We will fight all bogus charges. #Basta

She was arrested for allegedly allowing a customer to touch her while on stage in a non sexual manner! Are you kidding me? They are devoting law enforcement resources to sting operations for this? There has to be higher priorities!!! #SetUp #Basta

Police documents obtained by CNN affiliate WSYX claim that Daniels removed her top and pressed the faces of patrons between her breasts. She also fondled female patrons at the club.

When three officers approached her, she proceeded to do the same, allegedly pushing their faces into her chest and fondling them.

We expect her to be released on bail shortly. We also expect that she will be charged with a misdemeanor for allowing “touching.” We will vehemently contest all charges. #Basta

Ohio’s Community Defense Act prohibits individuals who are not family from touching semi-nude or nude dancers, according to CBS News.

Daniels was charged with three counts of “Illegally Operating Sexually Oriented Business – Employee Knowingly Touch Any Patron.” Ohio law states clearly that “no employee who regularly appears nude or seminude on the premises of a sexually oriented business, while on the premises of that sexually oriented business and while nude or seminude, shall knowingly touch a patron who is not a member of the employee’s immediate family.”

Daniels posted bail Thursday morning, and she will be arraigned Friday, CNN reports.

My client @StormyDaniels will issue a plea of “Not Guilty” to the three misdemeanor charges.

Stormy Daniels became famous after alleging to have had an affair with Trump in 2006. The president has denied all allegations against him. She is suing the president to invalidate a nondisclosure agreement signed prior to the election. (RELATED: STORMY SUES, Wants To Tell All About Alleged Trump Affair)