Melania Trump reflected on her and President Donald Trump’s trip to England and praised the veterans she met who have “dedicated a life of service to their country for freedom.”

“Today’s visit to RHC [Royal Hospital Chelsea]was focused in two areas,” the first lady explained, according a report from the White House Friday.  “First, it is always an honor to meet with soldiers who have dedicated a life of service to their country for freedom and protection of their people.” 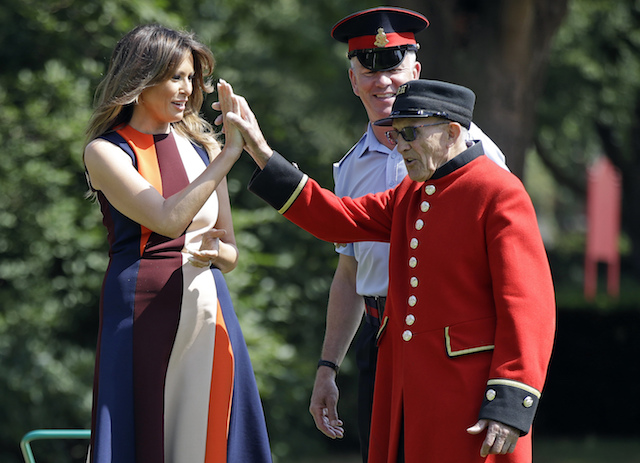 First Lady Melania Trump high-fives with a British military veteran known as a “Chelsea Pensioner” during a game of bowls at Royal Hospital Chelsea on July 13, 2018 in London, England. (Photo by Luca Bruno – WPA Pool/Getty Images)

“Secondly, I was very much looking forward to discussing concepts of ‘Be Best’ on an international level,” she added. ” The event highlighted that being the best you can be incorporates honoring the sacrifices of the past and celebrating hope for the future.”

“Thank you to the Pensioners and wonderful staff of RHC; the students and staff of St. George’s Church of England Primary School; and to Mr. May for accompanying me on a wonderful outing in your country,” she continued.

FLOTUS and the president arrived in London Thursday afternoon. In the evening, they attended an arrival ceremony and gala dinner at the Bleinheim Palace with British Prime Minister Theresa May and her husband, Philip May.

Melania visited Friday with the Chelsea Pensioners, former soldiers of the British Army “who are cared for at the Services retirement home at The Royal Hospital in London.” She also joined the Pensioners and local school children in making poppies, “a symbol of remembrance for fallen soldiers.”

Later, first lady and Trump attended a tea at Windsor Castle and meet with Queen Elizabeth II, before traveling to Scotland.