Hunter detailed Manion’s “brave and heroic actions” even after the Marine was fatally wounded in Iraq in 2007, in a letter to Mattis that was dated June 1. It is unclear whether any Department of Defense officials have responded to Hunter’s request.

The “new material evidence” that Hunter emphasized is that Manion continued to fire more than 200 rounds from his rifle and grenade launcher after being fatally wounded. This information was disclosed in a witness statement from Staff Sgt. Paul D. Petty that was dated to the same day as the ambush. Those details from Petty’s statement were not included in Manion’s original award recommendation, said Manion’s sister Ryan Manion, quoted in an article from Military.com Sunday.

Manion’s patrol searched a suspected insurgent’s home while operating in Fallujah on April 29, 2007. The situation quickly turned into an ambush, according to the Hall of Valor Project. Manion and a fellow Marine exposed themselves to enemy fire in order to rescue a wounded member of their patrol. (RELATED: ‘Do Not Celebrate Victimhood’: Mattis Speaks At Merchant Marines Commencement)

Manion then led a counter attack with an assault rifle and grenade launcher when another Marine was wounded. Manion recovered the wounded Marine while five insurgents fired. The patrol found themselves being fired upon from three sides after an improvised explosive device kept Iraqi Army reinforcements from helping, according to the Hall of Valor Project.

While moving to draw fire away from the wounded and obtain a better position to fire on the insurgents, Manion was fatally wounded by a sniper but continued to fire.

“[Manion’s] efforts that day are in the highest standards and traditions of our Marine Corps,” Hunter wrote. “His distinguished display of extraordinary heroism while engaged in action against a foreign enemy, along with this new material evidence, removes any doubt that our Marines in the field were correct; the appropriate medal for these actions is the Navy Cross.” 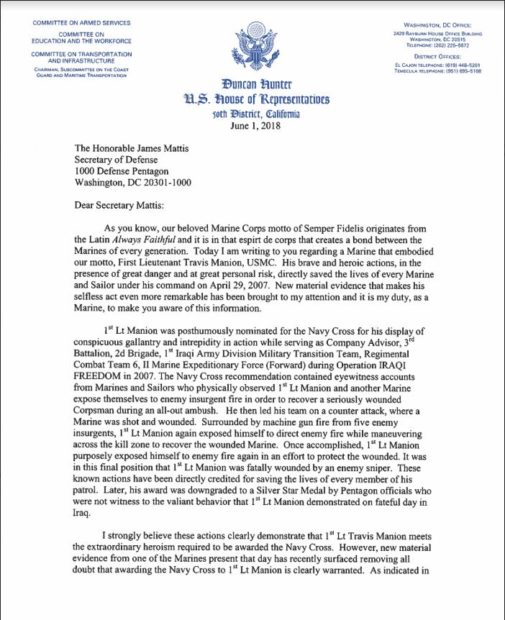 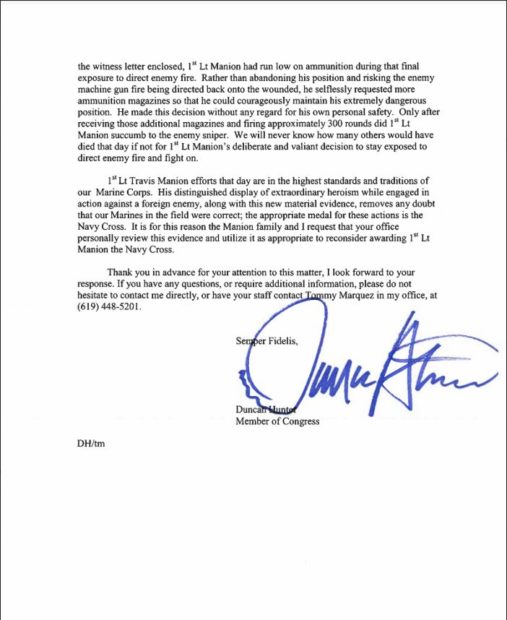 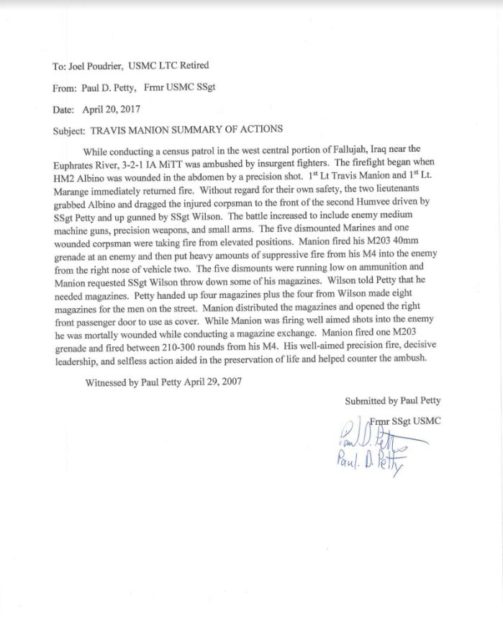