“Putin, a former KGB spy chief, has a pretty good poker face. BUT even he looks like he can’t believe his luck, as Trump stands next to him, on foreign soil, and trashes his own intelligence agencies, and repeatedly praises Russia.”

Journos embarrassed by Trump in Helsinki

FNC’s Abby Huntsman: “No negotiation is worth throwing your own people and country under the bus.”

Allahpundit: “This really is Trump’s lowest moment. Not his tawdriest, but the lowest.”

Al-Monitor‘s Laura Rozen: “Wow. Trump is coming off terrible in this interview with Hannity. What is wrong with him?”

CNN’s Jake Tapper: “From a national security expert who has supported President Trump: ‘Played like a fiddle. Unmitigated disaster. Embarrassing.'”

Washington Free Beacon‘s David Rutz: “A complete and utter humiliation of our country just now by a two-bit gangster. Trump has embarrassed himself and the United States.”

Playboy‘s White House reporter Brian Karem: “From a WH source: ‘Even those who like Trump no longer like Trump.'”

NYT‘s Peter Baker: “Not a new thought but worth noting again that Trump was far harsher on American allies Germany and Britain than he just was on Russia.”

CNN’s Oliver Darcy: “Senior White House official to @jeffzeleny: ‘How bad was that?'”

Bloomberg Opinion columnist Eli Lake: “This is a disgrace. Sorry. But this is horrendous. ‘What he did was an incredible offer.'”

NPR/CNN contributor Danny Deraney: “The world just witnessed one of the most disgraceful presidential moments and saw what treason looks like live and in color.”

Daily Mail blasts Air Force One for having shitty wifi

“Seriously. Southwest Airlines has gate-to-gate WiFi for 8 bucks, but reporters on Air Force One have to read printouts of tweets because there’s no Internet service. If the president were to have a heart attack in midair, no one could report on it until right before wheels-down.” — David Martosko, U.S. Editor, Daily Mail.

“No one has resigned. No one.” — Montel Williams, washed up daytime talk show host turned Twactivist.

Williams also turned his wrath on Gateway Pundit‘s Cassandra Fairbanks, calling her an “idiot.” Fairbanks replied, “And you’re a has-been who is so desperate that you had to resort to hawking payday advance loans… the most predatory loans in existence. Sad!”

See what put the steam between his ears below. 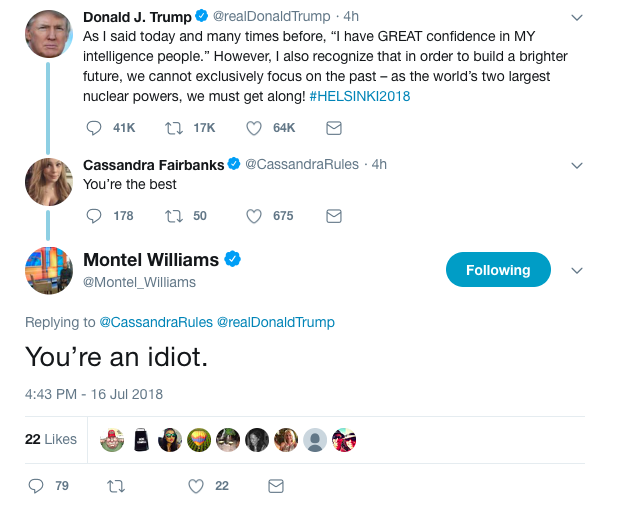 Give this man a nap…

“I have today off, and I’m still exhausted from all this.” — Pat Ward, producer, Fox News Sunday.

“Axios’ @jonathanvswann from Helsinki: ‘I just have no words. As press in this room, we are all sitting in here speechless and stunned…While Putin spoke forcefully, lying, Trump nodded along. There’s no way of sugar coating or spinning this.'”

“After this despicable press conference in which Trump refused to hold Russia responsible and protect our nation, there should no longer be any doubt that Donald Trump is a traitor.” — Steven Beschloss, filmmaker, editor, writer.

“I never thought I would see the day when our American President would stand on the stage with the Russian President and place blame on the United States for Russian aggression. This is shameful.” — Sen. Jeff Flake (R-Ariz.).

Trump fan McKay Coppins is back from paternity leave

“It’s my first day back from paternity leave, glad to see everything is still good and normal.” — The Atlantic‘s McKay Coppins (on Monday).

CNN’s Ryan Lizza: Everyone is numb and in shock. We can’t believe what we just witnessed, but for me it’s this simple: The President of the United States openly colluded with Putin to undermine our democracy. (BTW, Lizza autocorrects to “pizza.”)

The Daily Beast’s Lachlan Markay: “I don’t know why it needs to be oversold like this. A simpler and more mundane explanation: Trump is highly insecure about his election victory, Putin knows that, he’s really good at manipulating people, and it’s easy to manipulate someone who makes impulsive, emotional decisions.”

Editor has advice for Lizza

“Not seeing any pundits praise that Trump-Putin presser, but it’s easy to see how this is likely going to play out in pro-Trump media. When all else fails, they bash the media. I imagine you’ll see RW media seize on criticism directed from journalists, and attack media as biased.” — Oliver Darcy, media reporter, CNN.

She also worked at Entertainment Weekly and Men’s Journal.

Catriona Ni Aolain has joined Rolling Stone as Director of Creative Content for all photography and video. It’s a “newly created” role.

Reporter urges everyone to ask for more $$$

“I sent emails to 2 different editors last night asking for more money because the scope of the story had grown or the amount of work on the reporting was more than expected. I was nervous. I woke up this morning to an extra $1,000 when they both said yes. Moral of the story: ASK!” — Britni de la Cretaz, freelsports rep, Bitch Media, has written for The Atlantic, ESPN, etc…

“So @SpeakerRyan finally went out and got some guts.” — Roland Martin, TV One host.

Don’t hate me because they sent a car for me

“My first TV interview from Albany, NY — CNN sent a car to pick me up from my house in the Berkshires yesterday to talk about the latest Mueller indictments.” — Daniel Lippman, Politico Playbook writer.

NYP‘s Page Six: Spicey’s media tour is heating up. See here. If you want to see him on everything, you’ll have to endure Megyn Kelly‘s daytime show. You can also catch him on “Access Hollywood,” Jimmy Kimmel and “TMZ Live.” The only network he’s allowing into his home? Fox News.