Republican leaders believe they will keep their House and Senate majorities come November if they can convince middle- and lower-income voters they are benefiting from the tax cut signed into law last year. Congressional Democrats must believe this too because they are doing everything they can to portray the Tax Cuts & Jobs Act (TCJA) as a giveaway to “the rich.”

The latest salvo in the war to sway voters’ minds arrived this month from the Institute on Taxation and Economic Policy (ITEP). The opening sentence of the ITEP’s new report (“Federal Tax Cuts in the Bush, Obama, and Trump Years”) claims that federal tax cuts since 2000 have “disproportionately benefited well-off households.”

But let’s put this into perspective. Nearly two-thirds of the $5.1 trillion tax cut from 2001 through 2018 went to the richest fifth of Americans, the report states. While $5.1 trillion is an ungodly amount of money — even by government standards — it pales in comparison to the $45.1 trillion the federal government will collect over the period examined by the ITEP.

All this fuss over a 10 percent tax cut! Nice, but hardly radical.

Second, the top fifth of taxpayers will pay an estimated 87 percent of the personal federal income tax this year. The ITEP estimates these taxpayers received 63.3 percent of the income tax cuts from 2001 to 2018. Taking the ITEP’s numbers at face value, this suggests well-off households have, relative to the share of the income tax burden they bear, received a disproportionately smaller share of the tax relief provided since 2000.

The picture is little better for the next nine percent of taxpayers, who shouldered 30.46 percent of the income tax burden in 2001, and saw their burden climb to 31.55 percent of the tax in 2015.

The remaining 90 percent of taxpayers saw their share of the income tax burden fall. In fact, the share paid by the bottom half of taxpayers nearly disappeared — falling from 4.9 percent of the total burden in 2001 to 2.83 percent in 2015.

Fourth, considering a broader array of federal taxes does nothing to buttress the notion that tax cuts since 2000 have unfairly benefitted upper-income taxpayers. According to the ITEP’s report, the top fifth of taxpayers received 32 percent of the payroll tax relief from 2001 to 2018. Even this modestly disproportionate benefit reflects the heavier payroll tax burden shouldered by these taxpayers. They earned more. They paid more. Their tax relief reflects this. This is hardly earth-shattering.

The ITEP also measures the size of the tax cuts as a percent of income, which controls for the fact that the top earns the most and pays the most. Using this metric, the tax cuts are far more evenly distributed than the narrative suggests. 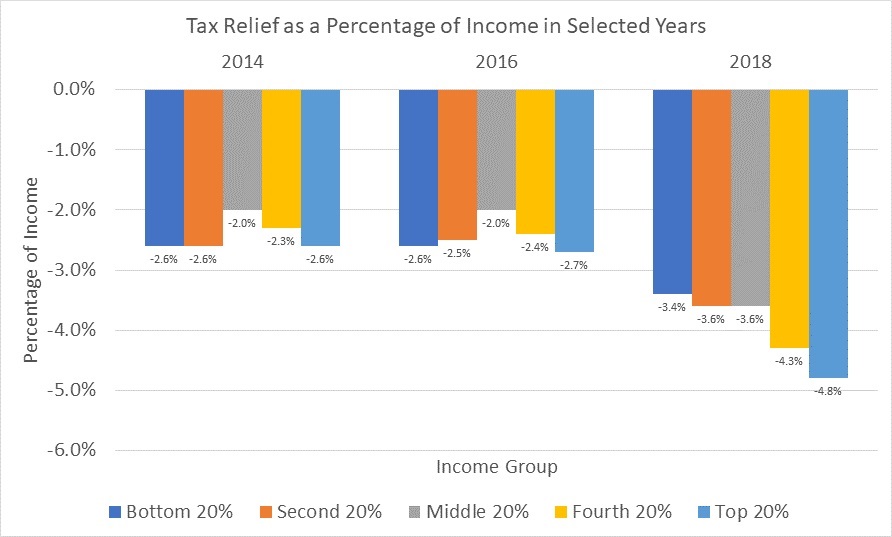 Fifth, the primary focus of the report examines a period that largely pre-dates President Trump and the tax cut he signed into law.

Finally, the ITEP’s estimates completely ignore well-documented concerns regarding the measurement of income and income inequality, behavioral responses to tax policy changes, and income mobility. Taxpayers, for example, routinely fall in and out of the top fifth of the U.S. income distribution; according to one estimate, 73 percent of American adults over a 44-year period were in the top fifth for one or more years.

The fact is that the TCJA provides a family of four earning the median family income of $73,000 with a tax cut of $2,059. And that’s before taking into account the additional pay and benefits businesses are increasingly offering workers in the aftermath of tax reform.

Ultimately, however, what counts most is not the TCJA’s static distributional effects, but the impact the new law will have on potential GDP and real income growth. While it’s far too early to evaluate the long-term economic impact of the TCJA, the evidence to date has been promising.

In the meantime, I will enjoy my “unfair” tax cut.

James Carter served as the head of tax policy implementation on President Donald Trump’s transition team. Previously, he was a deputy assistant secretary of the Treasury and deputy undersecretary of labor under President George W. Bush.