NYT profiled Söder, who is currently the premier of Bavaria, on July 6. The Saturday feature article referred to Söder as “Germany’s Trump” and noted his tough views on immigration, his “shrewd” communication skills and his distaste for political correctness.

However, the piece also accused him of saying that German children should be called “Klaus” rather than “Kevin” and proposing all members of the Green Party be drug tested.

An archive of the original article shows the paragraph with the false allegations:

In a correction posted on Monday, NYT revealed that the paragraph was actually based on fabrications from a German satire website.

“The Saturday Profile article on July 7 about the German politician Markus Söder misattributed statements to him,” NYT explained. “While Mr. Söder has a reputation for making provocative statements, he did not say that German children should be called Klaus, not Kevin, nor did he propose having the entire Green Party sent for a drug test. Those comments were written by a satirist, not Mr. Söder.” 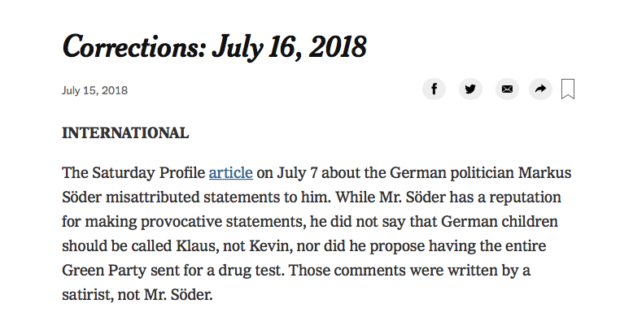 Stefan Kuzmany took credit for the NYT’s misrepresentation of Söder in the German-language news site Spiegel, explaining that he wrote the satirical positions 14 years ago with “far-reaching consequences.”