Modern genetic engineering techniques applied to agriculture are making stunning advances. This year, after decades in (gratuitous) regulatory limbo, the U.S. Food and Drug Administration, Health Canada and Food Standards Australia New Zealand gave the green light to domestic import and consumption of Golden Rice, which has been genetically modified to produce provitamin-A.

Every year, about half a million children become blind as a result of Vitamin A deficiency (VAD) and 70 percent die within a year of losing their sight. In developing countries, 200 — 300 million children of preschool age are at risk of VAD, which increases their susceptibility to infections such as measles and diarrheal diseases.

Yet this revolutionary rice, now being grown in test plots in many countries, has still not been greenlighted for public consumption in the two countries where it would do the most good: Bangladesh and the Philippines.

How could that be? No serious concerns have ever been raised about its safety, and human feeding trials in China have shown that Golden Rice can prevent this scourge. The reason is the strident, relentless opposition from anti-biotechnology non-governmental organizations (NGOs), Greenpeace in particular, that regard any genetic engineering success as a kind of Trojan Horse that could sway public opinion.

Golden Rice is one of many humanitarian breakthroughs being developed by universities and developing countries that remain stalled, including disease-resistant bananas and cassava; climate-adaptive plants; and new corn varieties that are more efficient at photosynthesis, able to fix carbon from atmospheric CO2 and convert it into sugar. The last of these advances reportedly results in a mid-single-digit or higher percentage increase in yield, which would be an extraordinary advance, especially in less-developed countries where corn is a subsistence crop.

There’s an old saying that no good deed goes unpunished, and the anti-genetic engineering machine, largely funded by the organic and natural products industries, continues to hum along, attacking not only companies that produce breakthroughs but also academics and ordinary citizens who preach the kind of science-driven public policy that will promote more advances.

That paid advocacy is particularly vile because it has taken such a personal turn—viciously assailing not only the technology but the scientists and science communicators who advocate for a level playing field that asks only that the technology be allowed to succeed or fail on its merits in the farm and food marketplace.

These activists regularly trot out a litany of false accusations about their targets, with university professors as frequent victims. The most notorious of these “hit groups” is U.S. Right to Know, or USRTK, which pretends to be part of a grassroots movement, but is actually mostly funded by the pernicious Organic Consumers Association. OCA is not a mainstream organic trade group but a rump organization of science deniers known for their rejection of medical vaccines (They cause autism!), support for homeopathy and believing that Zika virus outbreaks are a conspiracy perpetrated by the world’s chemical companies.

USRTK has filed harassing Freedom of Information requests for emails and documents of at least a hundred public university faculty and staff members, hoping to find snippets which, when cherry-picked from hundreds of thousands of emails and taken out-of-context, might imply conflicts of interest. Their efforts to undermine scientists and public policy scholars whose work threatens organic agriculture—as genetic engineering continually widens the already-large productivity gap between conventional and organic practices–follow a familiar pattern.

In the words of University of Florida plant biologist Kevin Folta, who has been excoriated repeatedly by USRTK for supposedly being a Monsanto sock puppet, the activists “develop a narrative that suggests industry collusion or undue influence, especially with any attempt to connect the faculty member to Monsanto, a company that is the bogeyman favorite of activists.” Professor Folta’s supposedly “egregious” pay-for-play violation: His university accepted $25,000, since returned, to help cover costs on an outreach project on genetic engineering.

USRTK has also targeted scientists in Canada, which has similar freedom-of-information laws. One prominent victim there was Peter Phillips, Distinguished Professor of Public Policy at the University of Saskatchewan, whose alleged sin was (surprise!) too close a relationship with Monsanto and allowing the company to influence what he said and wrote. The evidence? None.

Exposing emails to scrutiny may seem harmless or even important to protect the public’s right to have information. But even liberal advocacy groups such as the Union of Concerned Scientists have weighed in with their opinion that it’s a tool easily abused, resulting in suppression of the free exchange of ideas through intimidation. Consider that every page of the millions of every email requested by USRTK must be examined by attorneys to ascertain whether they are releasable. Professor Folta estimates that the USRTK fishing expedition may have cost his university as much as a million dollars of taxpayers’ money.

Other eminent academics, such as University of Illinois Professor (Emeritus) Bruce Chassy and University of Oklahoma Law Professor (Emeritus) Drew Kershen and investigative science writer and Genetic Literacy Project founder Jon Entine, co-author of this piece, have also been targeted. Folta, Entine and public supporters of agricultural biotechnology such as Neal de Grasse Tyson, Bill Nye and Bill Gates have also been victimized with misleading hatchet-job “profiles” by USRTK and natural-product wackos like Mike Adams, founder of Natural News.

Dr. Henry Miller, co-author of this article, has been on the USRTK hit-list since he emerged as a prominent opponent of an unscientific, unwise and probably unconstitutional 2012 California referendum issue that would have required labeling of genetically engineered food. USRTK were proponents of the measure. Paid pro-referendum activists lied effusively about him in the campaign, and some of their more flagrant falsehoods were regurgitated by the New York Times’ food columnist, Mark Bittman, apparently without any fact-checking.

Dr. Miller’s most controversial transgression, according to USRTK? Fast forward to 2015, when a U.N.-based agency erroneously categorized glyphosate (a generic herbicide which Monsanto markets as Roundup) as a “probable carcinogen.” Although Monsanto and Dr. Miller had a long history of mutual antagonism (see this and this, for example), a scientist acquaintance at the company emailed him and asked if that was something he might write about. He responded that although it was a worthy subject he was overwhelmed with various projects but that they should send him a “high-quality draft.” It was a poor choice of words by which he meant background material – other government agencies’ evaluations and scientific studies, as well as the company’s view of the decision. Eventually, Monsanto sent all of that.

When those emails were later released as part of a lawsuit in 2017, a New York Times reporter whom Dr. Miller (along with many in the scientific community) had criticized repeatedly for biased and inaccurate reporting, implied in an article that the op-ed that resulted from the exchange was “ghostwritten.”

The Times article was incomplete and misleading. In a phone conversation – which, of course, is not reflected in the emails – Dr. Miller had told a Monsanto staffer exactly what arguments and points he wanted to make, and his acquaintance sent back a rough draft that consisted almost entirely of what had been outlined. Dr. Miller then modified it and published it as an op-ed. In the end, the ideas, opinions and words were his own. Moreover, the article was in every respect accurate and, for once, reflected the views of both the academic community and industry.

The University of Florida’s Kevin Folta has characterized the activists’ goal as leaving “these trusted professors, dietitians and physicians ‘Google Dead’ — a state where their online reputation will always drag the anchor of activist derision.” He describes how these character-assassination campaigns work:

In the case of [University of Saskatchewan Professor] Phillips, US-RTK acquired emails and used Jason Warick from CBC News as a complicit pipeline to media. This way it is not simply [USRTK co-director] Gary Ruskin and his band of industry-financed lackeys slandering scientists on activist websites. Instead, it takes [on] the patina of legitimate research, hard-core gumshoe reporting. It really is a reporter doing the bidding of US-RTK, who is doing the bidding of a handful of organizations, companies, and undisclosed donors paying for the hit.

USRTK and its fellow travelers are not only going after academics and science journalists. One of the most unlikely and undeserving targets is Stephan Neidenbach, a Maryland middle-school teacher and science communicator who blogs about science and technology. The trolls and character assassins tried unsuccessfully to get him fired and conducted a campaign of harassment and intimidation against him. Read his chilling account here. Here is some of the online smear campaign: 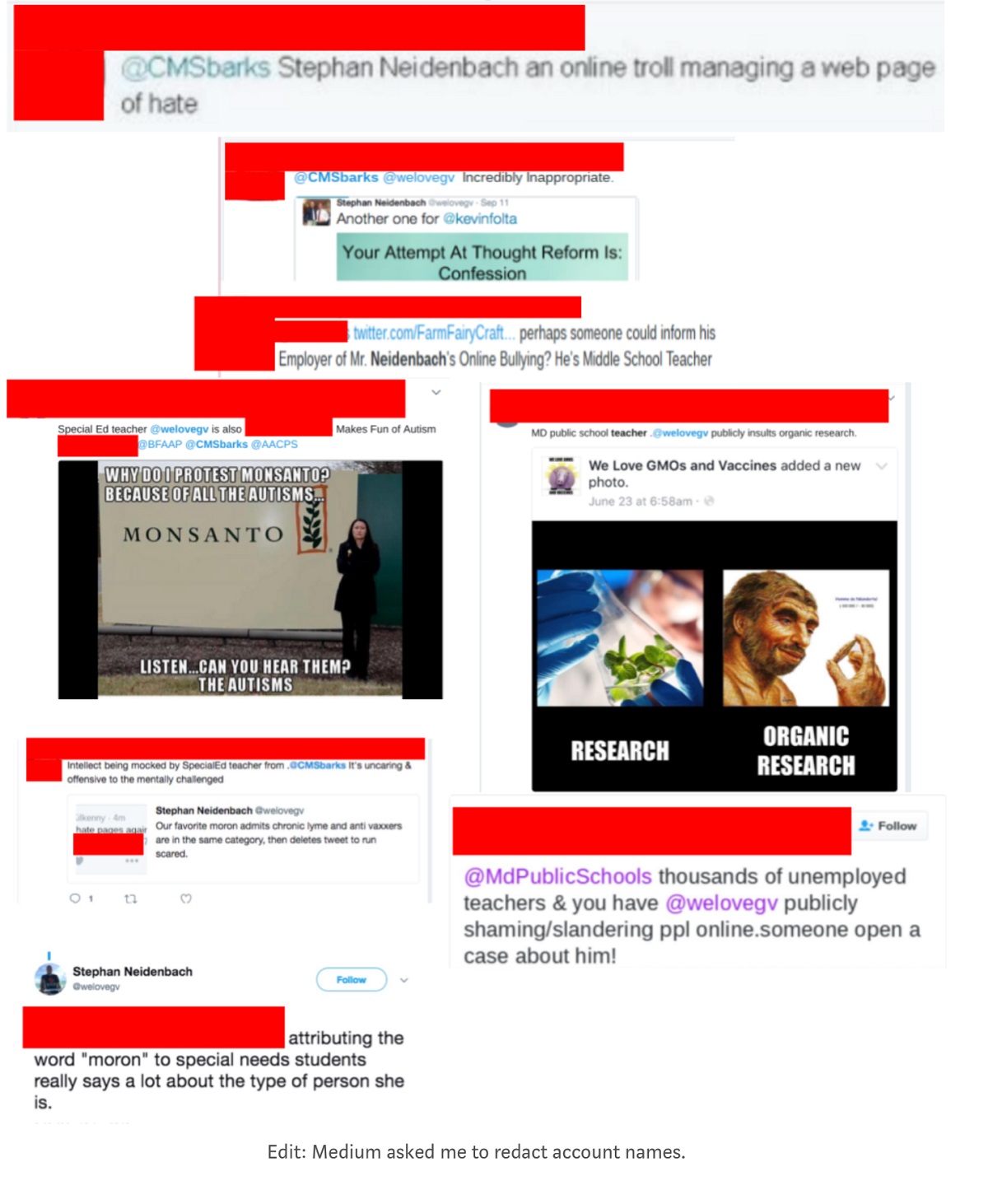 The character-assassination campaigns present an exquisite irony: USRTK and its ilk accuse their targets of being shills – paid agents of the agribusiness industry who have a conflict of interest—but it is they who are the shills, bought and paid for by the organic and “natural products” industries.

Many of these NGOs are paid by extremist supporters of organic farming and even some mainstream companies and executives, such as Gary Hirshberg, chairman of Stonyfield Organic and founder of Just Label It, an activist group notorious for spreading misinformation about conventional—that is, non-organic—agriculture.

And in an odd and disturbing irony, many anti-biotechnology “green groups” have palpable links to Russia’s prodigious propaganda machine, as two researchers at Iowa State University have shown. Russian state news organizations, mainly Russia Today (RT) and Sputnik, were the sources of more than half of all 2016 stories using the term “GMO,” with RT producing 34 percent of articles and Sputnik 19 percent. Who promoted these Russian propaganda outbursts most aggressively? USRTK, of course.

What’s the benefit for Russia? Moscow is trying to position itself as a major non-genetic engineering agricultural supplier, so demonizing U.S.-dominated advances in agriculture and associating them with MonSatan and imaginary hazards of genetic engineering directly serves their interests—and undermines American farming and farmers.

The Russians are not amateurs at this. According to April Glaser, who writes on technology for Slate, “The Internet Research Agency is based in St. Petersburg, Russia, and has been at work since at least 2013 churning out memes, YouTube videos, Facebook posts, and Twitter accounts; pretending to be activist groups; and even organizing grassroots events in an attempt to sway with political campaigns and conversations around the world.”

Worst of all, the fake-news-based disinformation campaigns, many with Russian links and launched on issues from agricultural chemicals and genetic engineering to nuclear energy and fracking, erode the ability of the public to judge what is true and what is not with respect to complex public policy issues. And it is distressing for those of us being attacked, to say nothing of our friends and families.

Henry Miller, a physician and molecular biologist, is the Robert Wesson Fellow in Scientific Philosophy and Public Policy at Stanford University’s Hoover Institution. He was the founding director of the Office of Biotechnology at the FDA. Please follow him on Twitter at @henryimiller. Jon Entine, founder and executive director of the Genetic Literacy Project, is an Emmy-winning investigative reporter, former TV news producer and author of seven books, including three on genetics. Please follow him on Twitter at @JonEntine.