While Facebook and Instagram continue to censor conservatives, a new t-shirt line called “hanging with Trump,” which depicts the president hanging from a noose made out of a red tie, managed to somehow sneak past Instagram’s “Community Guidelines.”

The group’s Instagram page reads: “Political Statement + Satire = Protected by Free Speech. We Donate For Every Shirt to support our women, children and elderly. Get Yours @Indiegogo”

The page shows several models wearing shirts with the image:

At the time of this writing, the comment section showed someone who had “anonymously reported hangingwithtrump’s post for violence or threats of violence.”

A screenshot showed Instagram’s apparent response to the report:

“Thank you for taking the time to report hangingwithtrump’s photo. While we reviewed the post you reported for violence or threat of violence and found it does not violate our Community Guidelines, reports like yours are an important part of making Instagram a safe and welcoming place for everyone.” 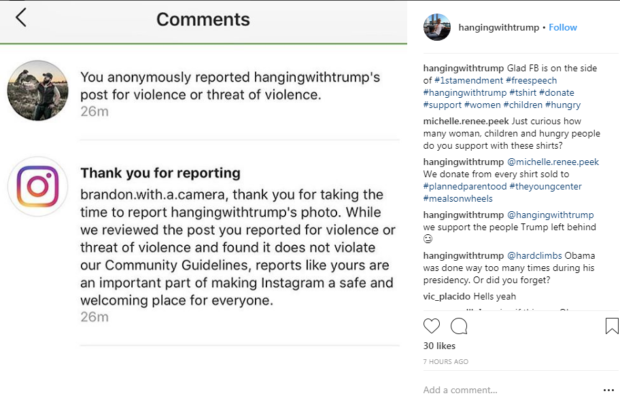 The discussion on that post centered around defenders who called it a “satirical political statement” versus others who pointed out the obvious hypocrisy.

“It’s not literal, it’s a satirical political statement that says Trump is barely hanging in there. His presidency is falling apart, don’t you agree?” said one commenter.

“I don’t see where it’s falling apart, but I see your point about satire,” another responded. “Although Instagram would ban you if this exact shirt had Obama hanging on it. You would be labeled racist, not satirical.”

The company also has Indiegogo and Vimeo pages.

In May, Donald Trump Jr. tore into Instagram for a warning that appeared when a friend searched his name that said, “Posts with words or tags you’re searching for often encourage behavior that can cause harm and even lead to death.” (RELATED: Donald Trump Jr. Takes On Zuck And Instagram For ‘Censorship’)

“REALLY?!?! Are you fricken kidding me? @zuck this is insane,” Trump Jr. wrote. “I get that my 3 year old Chloe can be pretty aggressive as are a few of my humorous memes, but this is ridiculous. If this account ‘could cause harm and even lead to death’ we have serious problems. The #shadowban nonsense and the hysteria RE any conservative thought has to stop.”