The Trump administration is pushing back against congressional Democrats who oppose Judge Brett Kavanaugh’s nomination to the U.S. Supreme Court, after a video surfaced of the judge challenging the constitutionality of independent investigators.

The video, first flagged by CNN, shows the judge criticizing the Supreme Court’s 1988 Morrison v. Olson decision, in which the high court turned back a constitutional challenge to the federal independent counsel law. The statute created an independent investigator with a broad mandate to investigate government corruption. Congress let the law expire in 1999.

Justice Antonin Scalia was the lone dissenter in Morrison, writing an opinion criticizing the independent counsel law many consider his best.

Kavanaugh criticized Morrison during a 2016 lecture at the American Enterprise Institute in Washington, when asked if there were particular Supreme Court precedents with which he disagreed. He initially demurred, then named the Morrison case.

“I’m going to say one, Morrison v. Olson,” the judge said. “It’s been effectively overruled, but I would put the final nail in.”

Senate Minority Leader Chuck Schumer of New York spoke on the floor of the Senate just hours after the remarks were publicized. Schumer criticized the judge’s “expansive” view of executive power, and demanded he recuse himself from cases related to special counsel Robert Mueller’s investigation of Russian interference in the 2016 presidential election.

White House deputy press secretary Raj Shah dismissed this criticism, noting Mueller’s was appointed pursuant to different rules that were not at issue in the Morrison case.

“The Dem attacks on Kavanaugh’s 2016 speech today are laughable, and show a total lack of understanding,” Shah said on Twitter. “There is a clear legal difference between the Independent Counsel statute and the Special Counsel regulation. Let’s not play fast and loose.” (RELATED: Liberal Group Behind Kavanaugh Resistance Is Hiding Its Funding)

While the old independent counsel was established by Congress, today investigators of Mueller’s variety are appointed by the attorney general in accordance with Department of Justice regulations. As such, Kavanaugh’s comments about Morrison are not necessarily indicative of his views about the constitutionality of the Russia probe.

As the Associated Press notes, Kavanaugh has acknowledged this distinction in other contexts. In a 2016 opinion concerning the structure of the Consumer Financial Protection Bureau, the judge rejected the argument that the independent counsel statute was a valid historical precedent for installing a single officer as head of an independent agency. He writes: 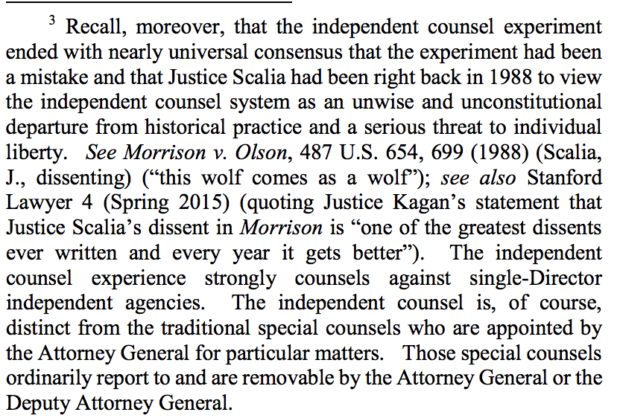 In the years after Morrison, Scalia’s view ultimately prevailed in most quarters — Democrats and Republicans alike came to appreciate the dangers of a free-floating investigator during the Ken Starr probes of the Clinton White House. As the Weekly Standard explained in a 2016 piece, the Clinton-era Justice Department decided to oppose renewal of the independent counsel law in 1999, partially basing its decision on Scalia’s dissent.

Senate Minority Whip Dick Durbin of Illinois, a Democrat, joined Republicans in calling the independent counsel “unchecked, unbridled, unrestrained, and unaccountable,” during a 1999 hearing. The senator appeared to reverse course Wednesday after Kavanaugh’s comments appeared in the press.

Some scholars have asserted the Morrison decision joined the so-called “anti-canon,” the body of decisions that are all but discounted in the legal community, even if they have never formally been overturned.

Though the anti-Morrison view was a consensus position in the recent past, opposition to the independent counsel law (or some variant which would protect the Mueller investigation) softened in the aftermath of President Donald Trump’s election. Legal academics argue that opposition to the independent counsel was a policy, not constitutional, judgement.