Old tweets comedian Michael Ian Black wrote have resurfaced, revealing similar “jokes” about child molestation and pedophilia that got “Guardians of the Galaxy” director fired by Disney on Friday.

Black, a self-described feminist, joked about a range of off-color topics in the old tweets, including relieving himself on little boys and judging the size of baby boys’ reproductive body parts.

Since Donald Trump won the presidency in November 2016, Black’s has ramped-up his rhetoric against Trump, referring to him as a “con man” or a “monster,” and regurgitates the liberal talking-point that the National Rifle Association as a terrorist organization.

“What’s Latin for ‘bring me some boys’?” the former “Reno 911!” actor said in a tweet March 13, 2013. Other so-called jokes include: “Hosting a bunch of eleven-year-old girls for a sleepover tonight. Terrified their parents will find out.”

“I don’t like watching ‘iCarly’ with my daughter because there is nobody on that show I want to molest,” he wrote June 28, 2011. 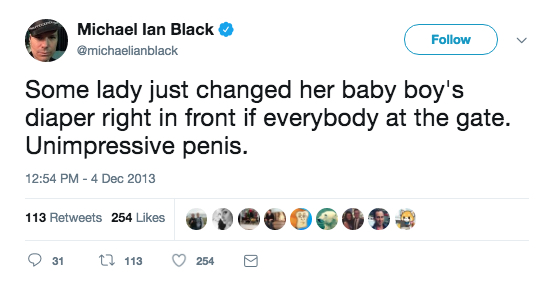 “Guardians of the Galaxy” director James Gunn was fired Friday for controversial tweets that were very similar in nature to Black’s. Gunn described his tweets as a “joke” about pedophilia and child rape, The Daily Caller News Foundation reported. (RELATED: After Attacking Conservatives, Disney Filmmaker’s Tweets Reveal Racism, Homophobia And Assault Against Children)

“There’s nothing to defend,” Black wrote on Twitter Saturday in response to liberal journalists’s call to make sure Black isn’t reprimanded for his “jokes.”

Black is also the author of a children’s book titled, “Naked!” which, as one description says, is all about the joys of being naked you’re a child. “Being naked is great. Running around, sliding down the stairs, eating cookies. Nothing could be better,” one description reads.

Hollywood celebrities came to the defense of Gunn, including some of his own cast in the “Guardians of the Galaxy” series.

“I will have more to say but for right now all I will say is this,” Dave Bautista tweeted. “James Gunn is one of the most loving, caring, good-natured people I have ever met. He’s gentle and kind and cares deeply for people and animals. He’s made mistakes. We all have. I’m not ok with what’s happening to him.”