Public librarians fired back at a Forbes article that called for Amazon to replace all public libraries, because libraries “don’t have the same value they used to.”

“No offense to y’all at Forbes, but a little research would prevent you from publishing this kind of twaddle,” the Harris County Public Library in Texas responded on Facebook, The Guardian reported.

The Forbes article — titled Amazon Should Replace Local Libraries to Save Taxpayers Money — argued that it would benefit Amazon’s stock, save tax payers money, and be an innovative and cheaper alternative than public libraries.

“At the core, Amazon has provided something better than a local library without the tax fees. This is why Amazon should replace local libraries,” wrote Forbes contributor, Panos Mourdoukoutas. “The move would save taxpayers money and enhance the stockholder value of Amazon all in one fell swoop.”

Amazon began as an online bookstore and now its CEO, Jeff Bezos, is the richest person in modern history. Mourdoukoutas praised Amazon’s Amazon Books, a chain of stores Amazon began in 2015 that, as he put it, “basically combines a library with a Starbucks.”

He added: “Amazon have created their own online library that has made it easy for the masses to access both physical and digital copies of books. Amazon Books is a chain of bookstores that does what Amazon originally intended to do; replace the local bookstore.” 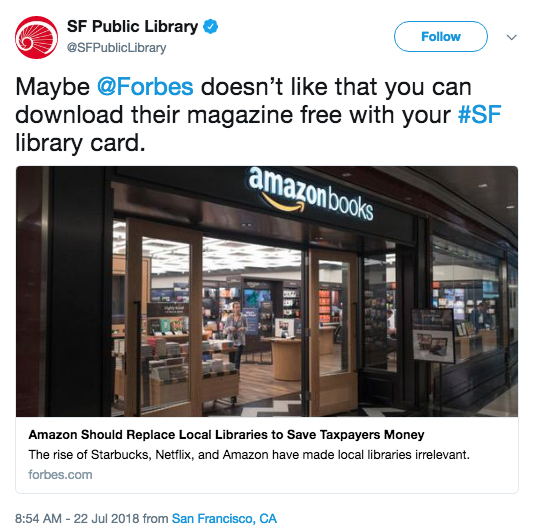 “Visit your local library for one day. Sit and watch who comes in to use the services — it’s not just people checking out free books. It’s one of few places in our society where the underserved can be treated with dignity and respect. It’s WiFi. It’s translators. It’s kindness,” tweeted one librarian, Amanda Oliver, who has worked at the Washington DC library for the past seven years.