Republicans on the House Permanent Select Committee on Intelligence asked President Donald Trump in a June 14 letter to declassify and release 21 pages from one of the applications for a spy warrant against former Trump campaign adviser Carter Page.

The Republicans do not specify why they identified the 21 pages in particular, but the request suggests they believe that the heavily redacted pages contain evidence the FBI and Department of Justice misled a federal judge in its application for the Page Foreign Intelligence Surveillance Act (FISA) warrant.

“In the course of the Committee’s investigation, we have uncovered irregularities with the process by which DOJ and FBI obtained information and sought and renewed three times a warrant pursuant to FISA on U.S citizen Carter Page,” reads the letter, which was first reported by Fox News.

The release of the letter comes just after the Justice Department released four applications submitted for FISA warrants against Page. The applications revealed that the FBI and DOJ relied heavily on the unverified Steele dossier in its application for the spy warrants. (RELATED: DOJ Releases Carter Page FISAs)

The applications also assert that Page acted as a foreign agent of Russia while he was on the Trump campaign.

The Republicans claim that the dossier, which was funded by Democrats, “was not subjected to proper U.S. government verification and was not handled according to FBI procedures.” The letter notes that the FBI’s internal investigation policy manual, the Domestic Investigations and Operations Guide, “prohibits the FBI from using unverified material to obtain a warrant under FISA.”

The Republicans identified pages 10-12 and 17-34 of the final FISA granted against Page, which was approved in June 2017. Deputy Attorney General Rod Rosenstein and then-Deputy FBI Director Andrew McCabe signed off on the application, which is 121 pages in all.

That section begins with allegations about Page provided to the FBI by a confidential human source who closely matches Christopher Steele, the former British spy who authored the dossier.

In the dossier, Steele alleged that Page met secretly with two sanctioned Kremlin insiders during a July 2016 trip to Moscow. Page was also accused of working with Trump campaign chairman Paul Manafort on the alleged collusion conspiracy. Page has vehemently denied colluding with the Kremlin. He also insists he has never met the Kremlin insiders or Manafort. (RELATED: Gowdy: If Collusion Evidence Existed, Adam Schiff Would Have Leaked It)

Unredacted footnotes in that section also reveal that the FBI cut ties with Steele in October 2016 after he made unauthorized disclosures to the media. The government said it would overlook Steele’s actions because he had been a “reliable” source in the past.

The third section identified by House Republicans includes a lengthy review of a Sept. 23, 2016 article in Yahoo! News about Page.

The article, written by Michael Isikoff, has become one of the more contentious components of the FISA applications. That’s because the FISA applications do not acknowledge that Steele was a source for Isikoff. Republicans have argued that the FBI relied on information sourced to Steele to help support Steele’s dossier allegations.

Democrats have argued that Republicans have misrepresented the FBI’s citation of the article. Intelligence Committee Democrats said in a memo released on Feb. 24 that the Isikoff article was used “to inform the Court of Page’s public denial of his suspected meetings in Moscow.”

Supporting the Democrats’ argument is the title of the subsection that addresses the Isikoff article: “Page’s Denial of Cooperation with the Russian Government to Influence the 2016 U.S. Presidential Election.”

But supporting Republicans’ argument is that the subsection presents allegations from Isikoff’s article in a way that suggests that the information was derived independently from Steele.

The section also contains a glaring oversight on the FBI’s part. By the time the bureau submitted its final FISA application, Steele had revealed to a court in London that he met with numerous journalists in September and October 2016 to discuss his Trump investigation. Yahoo! News was one of the outlets that Steele acknowledged meeting. Nevertheless, the FBI stated in a footnote in all four of its Page FISA applications that the bureau “does not believe that Source #1 directly provided this information to the identified news organization that published the September 23rd News Article.” 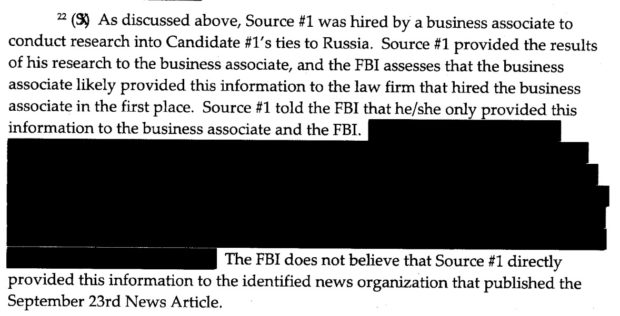 Pictured is a section from the Carter Page FISA warrant application.