Kathleen McKinley, a conservative blogger and political commentator for a local Fox station in Houston, was surprised Friday to find an email from Twitter announcing her account had been suspended.

In the first tweet, McKinley stated her opposition to an Obama-era rule allowing transgender troops serving in the military, which she felt “was normalizing a mental disorder (gender dysphoria) (called ‘distress’ now) which has no place in our military. Certainly not our $$ for surgery.”

The belief that biological males who believe they’re women shouldn’t be cleared for military service is well within the conservative mainstream.

That tweet had a specific context: McKinley’s friend Obianuju Ekeocha, an African pro-life activist, was in a Twitter debate about abortion with Bill Prady, a producer on CBS’ “The Big Bang Theory.

Prady’s response made him appear uncertain on whether he condemned religious honor killings (a fact he later acknowledged and called “inexcusable”).

It was in that context that McKinley replied, “Please do not pretend you know nothing about extreme Muslim beliefs that condone honor killings!!” 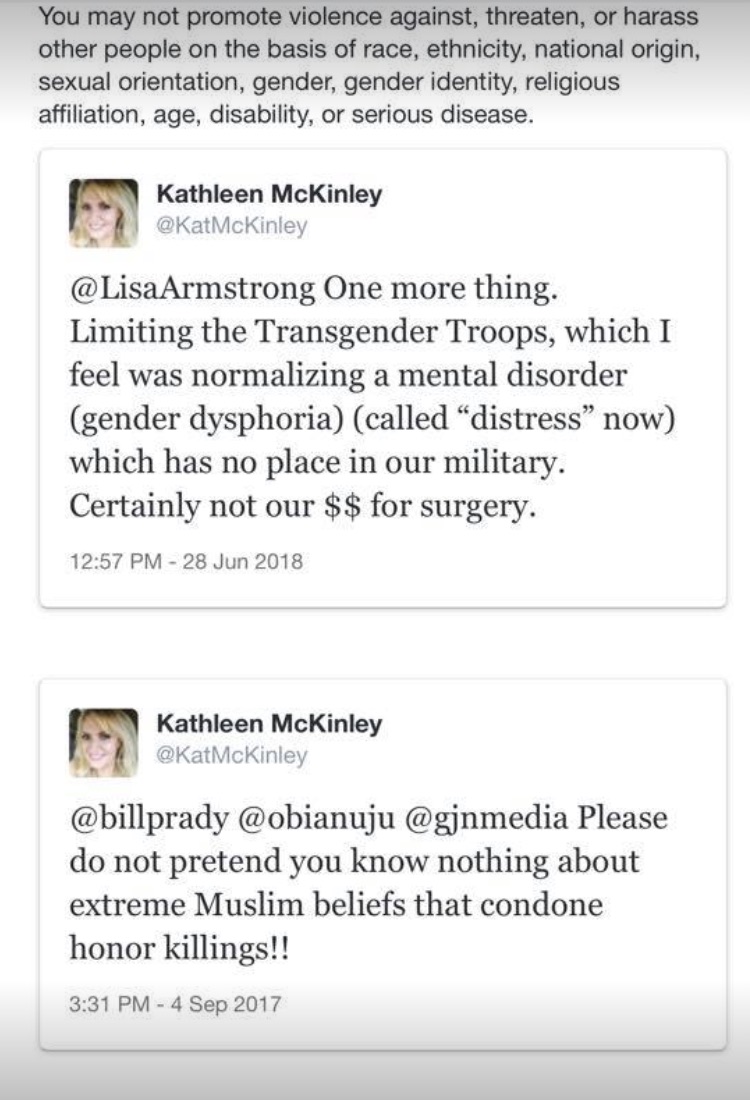 Twitter email to Kathleen McKinley informing her of her suspension

McKinley’s suspension came one day after a jury in her hometown of Houston found a Jordanian immigrant, Ali Mahwood-Awad Irsan, guilty for murdering two people in religiously-motivated honor killings.

Irsan, whom prosecutors described as “a radical extremist Muslim,” killed two people and planned to kill three others “including his daughter, after she ran away from the family compound in rural Montgomery County, converted to Christianity and married a Christian man,” the Houston Chronicle reported.

“Do you see even a hint of promoting violence, threatening, or harassing? I think that is what upsets me the most,” McKinley told TheDCNF in an email. “To be accused of that.”