Twitter issued a temporary ban on Missouri Senate candidate Austin Petersen one week before Republican primary elections after a mass-reporting campaign led by a progressive organization.

For 12 hours on Monday, Petersen could not tweet to his 58.7 thousand followers during a crucial period before the GOP primary election on Aug. 7. The candidate is proactive on Twitter, often communicating with his followers and retweeting them.

Twitter suspended Petersen for what it described as “abusive behavior” after he tweeted that his campaign accepts bitcoin donations, according to a Facebook post from Petersen’s official page. The liberal organization ShareBlue and activist Caroline Orr attempted to draw a connection between Petersen accepting bitcoin donations and the alleged Russian hack of Missouri Democratic Sen. Claire McCaskill. 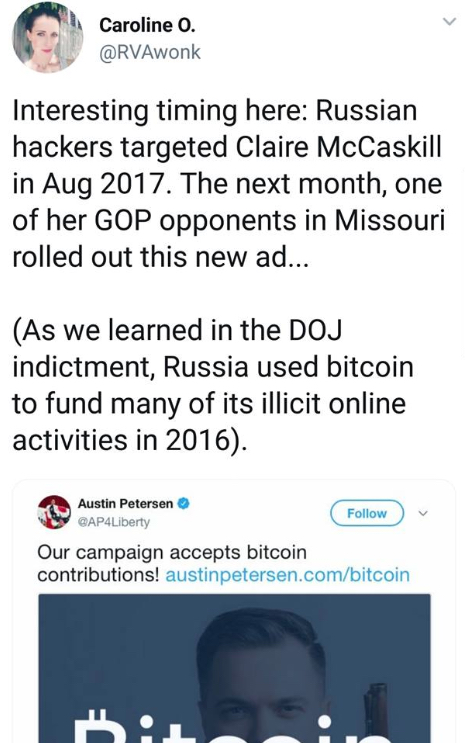 Petersen, who sought the 2016 Libertarian Party nomination for president, responded with a humorous animated picture, or gif, of Russian dictator Joseph Stalin, with the caption “off to Gulag now.”

Petersen’s potential Democratic opponent in the general election — if he wins the primary — would be incumbent Claire McCaskill, who has raised over $22 million. The Senate race is in a state that President Donald Trump won by nearly 20 points.

.@clairecmc attack dogs out in full force against me. #PAC attack! Twisting my #bitcoin and #cryptocurrency advocacy as suspected #collusion with #Russia. Sad! Also… GOOD! Good sign! I am strongest vs Queen Mum of MO. Prepare for defeat, Democrats! 16 POINTS! #MOSEN

Petersen blasted Twitter and Democratic super PACs for “interfering with the federal senate race in Missouri by temporarily blocking my account due to a picture I shared which was located within Twitter’s own GIF file collection,” he said in a statement to an ABC-affiliate in Kansas City. (RELATED: Nunes: Legal Action A Possibility Against Twitter For Censoring Conservatives)

“ShareBlue, a Democratic Super PAC, attempted to paint me as colluding with Russia in a recent hack attempt on my opponent Senator Claire McCaskill simply because my campaign accepts Bitcoin, a digital crypto currency,” he added. “Responding to the attack with a humorous photo of Stalin waving, Democrats seized on this as if it were a credible threat, mass reporting my account and having it restricted for 12 hours. This action is deeply troubling and deserves national attention now, with the Missouri primary 7 days away, having a candidate silenced is a threat to American democracy.”

This isn’t the first time a social media giant has blocked Petersen from posting. Facebook issued a temporary ban on the candidate for giving away a free AR-15 in September.

A Twitter spokesman told The Daily Caller News Foundation in an email Tuesday that the company does comment on individual accounts for privacy and security reasons.