Caputo tweeted out a joke Wednesday insinuating that Trump supporters are missing teeth, writing, “If you put everyone’s mouths together in this video, you’d get a full set of teeth.”

If you put everyone’s mouths together in this video, you’d get a full set of teeth https://t.co/NWlicnJ4Mc

Conservatives on Twitter slammed Caputo for the joke, noting that his condescending attitude toward Trump supporters are why many of them have such disdain for the media.

Gee, why does everyone hate the media?

If we want to restore trust in media what we really need is more sneering tweets from journalists. That oughta do it

This is so gross and this kind of statement is what so many in the middle of the country think the media thinks of them. @politico should hold their reporters to a higher standard. https://t.co/LEDZBKq96g

Atta boy, Marc. That will convince them that the media is not against them. https://t.co/yGAhQexyiF

Journalists: Demonizing is will get someone hurt.

Yeah… @Acosta is to real reporters what Austin Powers is to real spys…https://t.co/Q7Nz6v4ECu 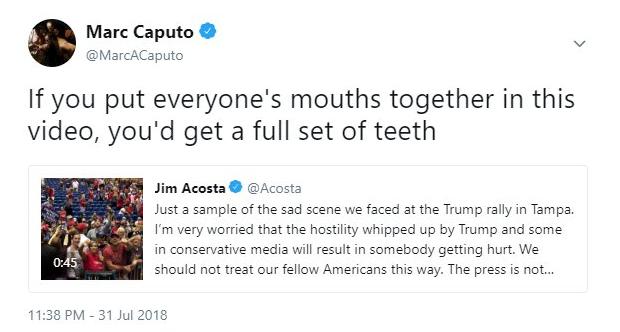