Politico reporter Marc Caputo fell on his sword Wednesday to apologize to the masses for contributing to the hateful atmosphere.

It tends to disappoint me when reporters apologize for really funny stuff they’ve done. And this is definitely one of those cases. NO: Do not apologize.

But its done. He’s sorry.

There is a bright side here — he’ll likely do something like this again because his aggressive — or “colorful” as he has put it — Twitter personality usually wins. Thank God.

He was responding to CNN White House correspondent Jim Acosta‘s video in which President Trump supporters booed him at a rally and gave him the finger. Trump often eggs his supporters on. He has called White House reporters the “enemy of the American people.” In turn, White House Press Secretary Sarah Huckabee Sanders has no shortage of snide remarks for reporters in the briefing room.

Caputo doubled down with this:

Then something terrible happened. Either the higher-ups at Politico weren’t pleased or he really felt badly about it. They do have some sort of policy that prevents reporters from saying anything they want on Twitter.

Last September, Politico editor Carrie Budoff Brown wrote in a memo, “The power of our work comes from independent reporting — a power that is diluted if we are seen as losing detachment or cheerleading for any type of agenda.”

In fact, reporters there are not supposed to express opinions on social media. “They represent the publication at all times,” reads a memo from management. And Politico vets its hires by scouring their social media feeds.

That sharp reminder arrived in Politico reporters’ inboxes after Julia Ioffe made a crude remark about Trump on Twitter in December, 2016. Politico fired her for it. Ioffe continues to tweet. She’s now a correspondent for GQ. 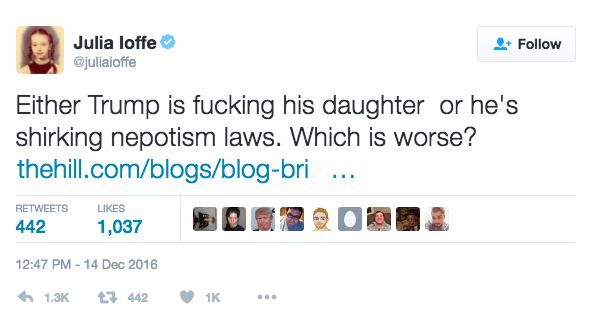 A story in WaPo last September says Caputo “fell a bit shy”of Politico‘s standards when he called a contributor to The Federalist an “asshole.” At the time, Caputo also said he was sorry.

Here are his current slew of apologies: three to be exact.

“I need to apologize for tweeting caustic remarks after seeing a reporter berated & abused. Hate begets hate,” Caputo wrote. “My comments referred ONLY to those jeering and swearing at the man, not a broad swath of people. But the fault is mine for causing confusion and feeding anger.”

“In the age of social media, where divisiveness serves no decent purpose, these flippant comments on my part only made things worse and contributed to a cycle of rage that I should not have inflamed further. So I’m sorry.”

Caputo concluded his sorrow by “owning” the error of his ways and posting his original, apparently offensive, tweets.

“While it’s usually a good idea to just delete tweets that are wrong, I own this and the criticism (both accurate and misleading) that has followed. I’ll do better. Here they are.”