Rosie O’Donnell said that she doesn’t believe that Donald “Trump’s a legitimate president” and called for him to “be impeached.”

“He [Trump] should not be president. I don’t believe he’s a legitimate president. I believe if it wasn’t for Russia he never would have won,” the 56-year-old comedian claimed during her appearance Monday night on “TheBeat w/Ari Melber” on MSNBC — during which she blamed both Russia and the media for Trump’s 2016 victory. 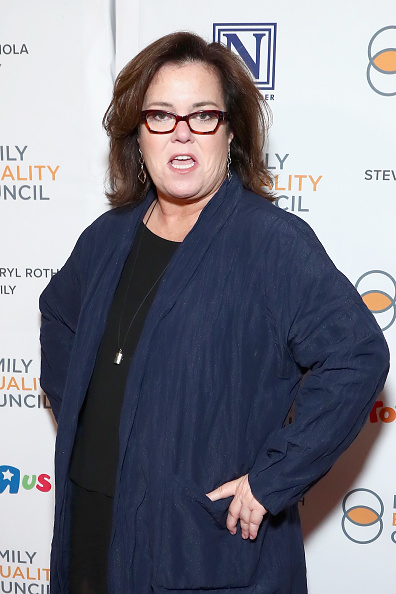 Rosie O’Donnell said she would leave the U.S., and Trump was actually delighted to hear the news. He stated “Now I HAVE to get elected!” (Photo:Getty)

“And I think the reason he’s not so panicked about Russia, is because he knows they are going to try again to do exactly what they did in 2016,” she added. “Although the mainstream media won’t say it yet, they actually gave him the election.”

“I don’t believe that he’s a legitimate President” and “I think Helsinki was the last straw for a lot of people” – @Rosie pic.twitter.com/tSHpyEqaTZ

“I believe that firmly and I think a lot of people do.  I think the media is a little bit slow in coming around to where the people actually are,” she continued. “It took you a long time to call him a liar, and the man’s been lying a long time since in office.”

“So, you know I think Helsinki was the last straw for a lot of people,” O’Donnell said. “It’s like forget it. You can’t get more blatant than he did right there, swore his allegiance to Russia. Not to his own country.”

“And I believe he should be impeached,” she added. “I’m sickened by Congress that doesn’t call for articles of impeachment when we have so much evidence of his horrible high crimes and misdemeanors.”

Last month, President Trump meet with Russian president Vladimir Putin in Helsinki, Finland. During the summit, Trump said at a joint press conference with Putin that he didn’t “see any reason why it would be” Russia behind the meddling in the 2016 election. He has since walked back the comments saying that he had no reason to believe “it wouldn’t be Russia.”