We all make the occasional pea-brained error.

But when you’re seasoned journalist Andrea Mitchell, chief foreign correspondent for MSNBC, and biased media reporter Brian Stelter (D-CNN), you might want to not fuck up so badly on Twitter.

Reacting to a hysterical poll that 43 percent of Republicans want to give President Trump the power to shut down the media, Mitchell exclaimed, “This is frightening — bad for the country and bad for journalism.”

Really, journaliasm? She’s frightened for an entire industry that she can’t spell correctly.

To her credit, she just left it there, in all the glory of its brainlessness.

This is frightening – bad for the country and bad for journaliasm https://t.co/M2HcZx4u3z

And then there’s Stelter’s thick-headed blunder — if it’s possible, it’s even worse than Mitchell’s. 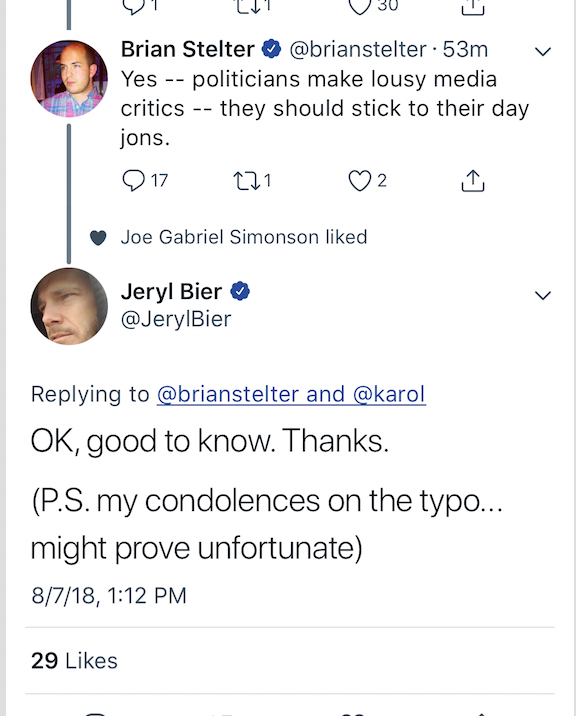 A journo quipped to The Mirror, “Did he mean their day bathrooms or day men who pay for sex?”

Also to his credit, Stelter still has the tweet up.

Yes — politicians make lousy media critics — they should stick to their day jons.

A Freudian slip? All congressmen are sickos?

It’s hard to say what was going through Stelter’s big, balding noggin — or, in this case, what he was not thinking.