Twitter is planning to accelerate changes to the company’s speech policies after a backlash from its own employees who want the company to ban right-wing conspiracy theorist Alex Jones.

Twitter CEO Jack Dorsey, responding to a critical tweet from a Twitter engineer, said Wednesday he is “not happy” with Twitter’s current policies, which he said need to “evolve.”

“If we succumb and simply react to outside pressure, rather than straightforward principles we enforce (and evolve) impartially regardless of political viewpoints, we become a service that’s constructed by our personal views that can swing in any direction,” Dorsey tweeted. “That’s not us.”

Dorsey’s explanation angered some of his employees, who demanded the CEO do more to regulate speech on the platform. (RELATED: Twitter’s Censorship Problem Looks Like It’s Here To Stay)

“There is no honor in resisting ‘outside pressure’, just to pat ourselves on the back for being ‘impartial,'” Twitter engineer Marina Zhao replied, adding: “Twitter does not exist in a vacuum, and it is wrong to ignore the serious real-world harm, and to equate that with political viewpoints.”

Engineer Kenneth Kufluk also stated his disagreement with his boss that Jones hadn’t violated any rules. 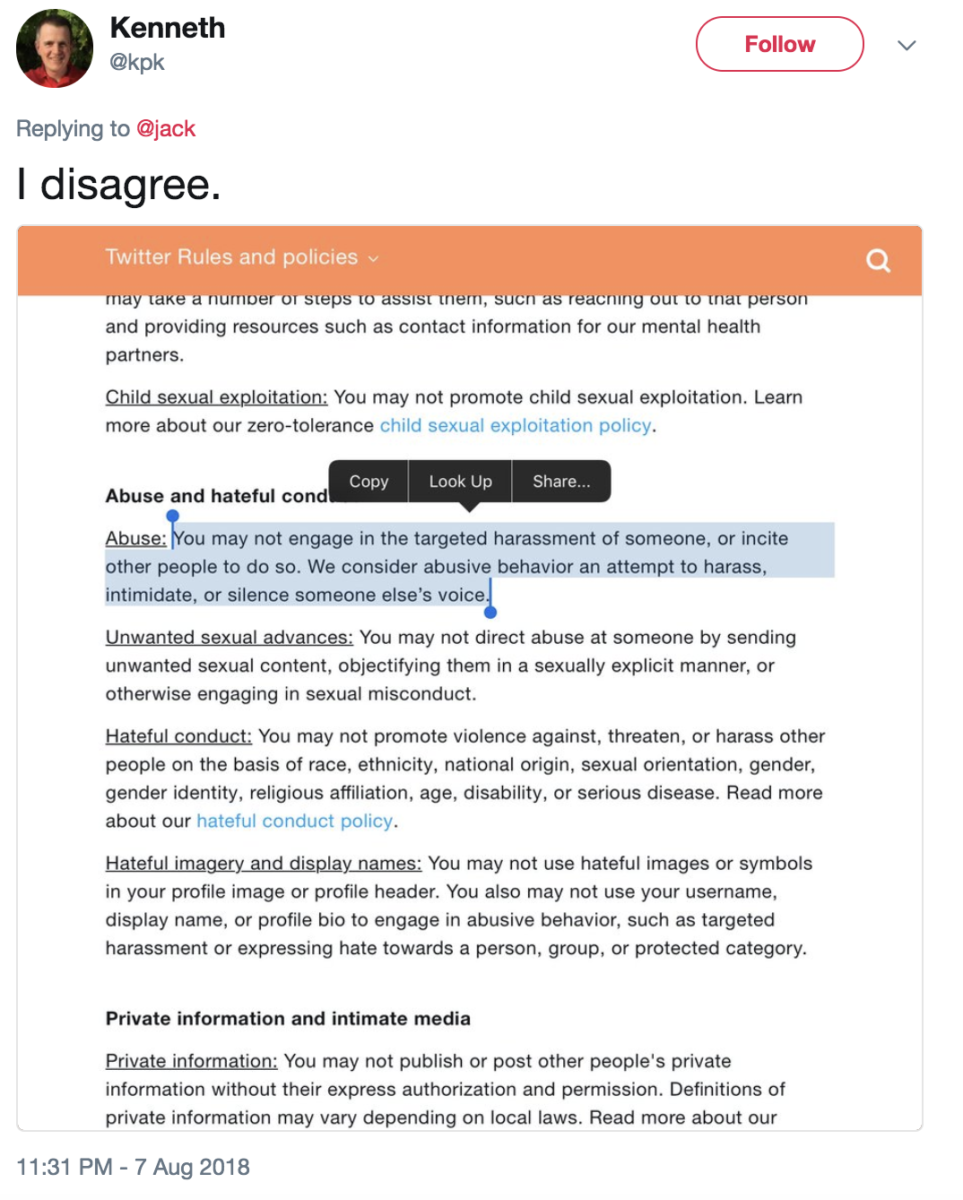 “I don’t agree with everything Twitter does or doesn’t do. If we can consistently enforce the policies and terms of service for the platform, that’s a good thing. But it doesn’t mean we should be satisfied with the policies we have,” another Twitter engineer, Mike Cvet, wrote in response to his boss.

“It is impossible to promote healthy dialog with bad-faith actors, who regularly produce toxic, dangerous and demonstrably false conspiracy theories; the objective of which is to mislead, radicalize, divide,” Cvet said.

“Our policies need to change, so that constructive discourse is not only possible, but commonplace. And so that our rules and the behavior they condone are something to be proud of,” he added.

Definitely not happy with where our policies are. They need to constantly evolve. Doing that work. Thanks for the thoughtful tweets and push, Mike https://t.co/UyY1wlvv4D

“Definitely not happy with where our policies are. They need to constantly evolve,” Dorsey replied. “Doing that work. Thanks for the thoughtful tweets and push, Mike.”

A Twitter spokeswoman told the The Daily Caller News Foundation that Twitter’s policies are constantly evolving and pointed to Dorsey’s tweets and a Tuesday blog post for further information.

Jones has a long track record of spreading conspiracy theories, including falsely claiming that the 2012 Sandy Hook shooting in Connecticut was a hoax. But Jones’ sudden banning across social media platforms has led to concerns that mainstream conservatives will soon follow.

Washington Free Beacon editor Sonny Bunch wrote Wednesday that “those who refuse to see this as the first step toward a more aggressive campaign of de-platforming conservatives are being obtuse.”

“The math here is simple: There is a growing belief that speech can be considered violence, that racist speech is by definition violence and that conservative thought is inherently racist. I don’t need a whiteboard or lizard people to connect the dots,” Bunch wrote in an op-ed.

Twitter is already under scrutiny for censoring and suppressing conservatives on its platform. (RELATED: Twitter Suspends Pro-Life Group From Running Ads — Then Reverses After DCNF Inquiry)

The social media company suspended conservative activist Candace Owens Sunday, after she quoted a New York Times writer’s anti-white tweets but replaced the word “white” with “black” and “Jewish.” Following a backlash, Twitter reversed Owens’ suspension, which it claimed was done in error.

Twitter in July suppressed four Republican congressmen on the site due to an algorithm change meant to punish “bad-faith actors.” All four are members of the conservative House Freedom Caucus. Twitter later said the suppression wasn’t intentional and that the congressmen’s accounts were penalized for having the wrong followers.

That same month, Twitter suspended conservative commentator Kathleen McKinley for two tweets: one that opposed clearing self-identified transgender persons for military duty and one that tied “extreme Muslim beliefs” — rather than mainstream Muslim beliefs — to the practice of honor killings.

Twitter did not apologize to McKinley or say her suspension was in error.