There’s a simple reason China didn’t include crude oil on its list of American products — it’s too reliant on U.S.-produced crude oil to give it up.

China removed U.S. crude oil exports from its tariff retaliation plans less than two months after threatening to tax American goods. China issued the tariff threats in response to the Trump administration’s tariffs on $50 billion worth of Chinese goods, including steel and aluminum.

Oil and natural gas have been a bright spot for U.S. exports, so threats from China, the world’s largest energy consumer, startled the industry. However, oil export data from the U.S. Energy Information Administration (EIA) shows why China backed away from oil tariffs. 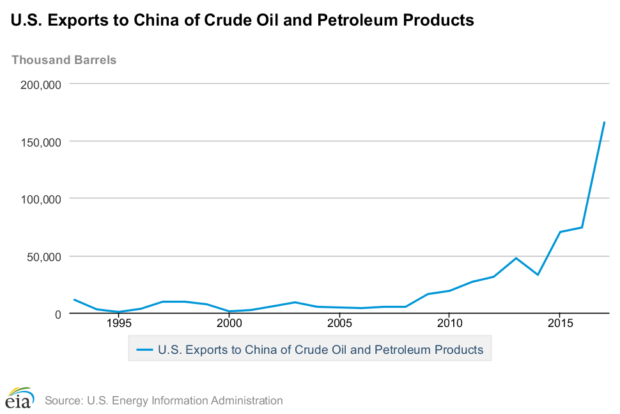 “The U.S. has been and will remain the main source of incremental crude production globally,” FGE energy consultant Den Syahril told Bloomberg. “With several new refineries starting up over the next couple of years, China would thus be wary of taking a decision that could end up severely hurting its domestic refining industry.”

“With oil from Iran and Venezuela at risk, U.S. crude is offering Chinese refiners a good and abundant alternative,” IHS Markit analyst Sophie Shi told Bloomberg. “Imagine if this ideal resource was cut off. That would leave China solely dependent on Saudi Arabia, which seems too risky.”