President Trump’s campaign assisted in making the administration’s formal announcement of the “Space Force” a reality on Thursday by asking supporters to help decide on which logo to use on official merchandise.

An email sent from the campaign calls the move by the administration “a groundbreaking endeavor for the future of America and the final frontier.”

The email then goes on to ask for recipients to assist in the decision-making process of selecting the logo to “commemorate President Trump’s new Space Force.”

Here are the proposed logos: 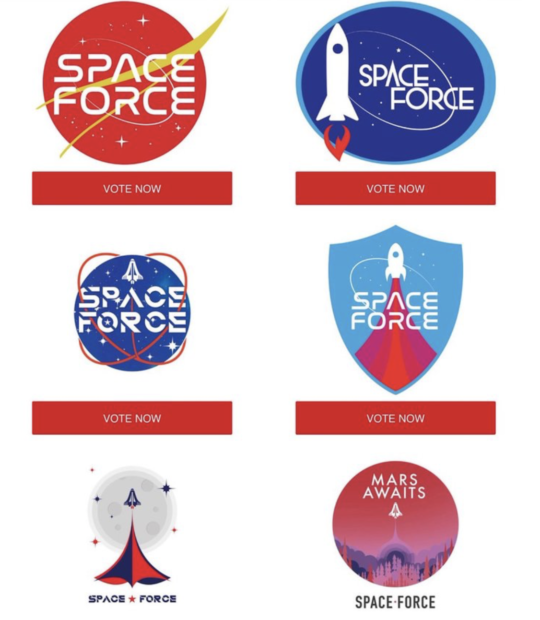 Users first select their favorite choice and are then guided to a separate page where they can confirm their selection and make a donation.

All but one of the six logo proposals contain the phrase “Space Force.” The other logo features the phrase “Mars Awaits.” One of the proposed logos bears a striking resemblance to the official NASA logo.

Space Force all the way!

The Department of Defense reported on Thursday the specifics of how to make President Trump’s Space Force a reality by the year 2020.

Vice President Mike Pence also spoke Thursday morning at the Pentagon to expound on the reasoning behind the Space Force.

“Now the time has come to write the next great chapter in the history of our armed forces. To prepare for the next battlefield, where America’s best and bravest will be called to deter and defeat a new generation of threats to our people, to our nation,” Pence said. “The time has come to establish the United States Space Force.”

President Trump has been consistent in calling for a Space Force for several months. His supporters also seem to be standing by his side along the way. At several recent rallies, supporters can be heard chanting “Space Force” when he mentioned the idea.

President Trump celebrated the formal announcement on Thursday by tweeting “Space Force all the way!