Newly released Department of Justice records appear to conflict with testimony that Fusion GPS founder Glenn Simpson gave to Congress in 2017 about the timeline of his interactions with top DOJ official Bruce Ohr.

Simpson claimed in testimony to the House Permanent Select Committee on Intelligence on Nov. 14 that he did not have contact with any FBI or DOJ officials regarding the infamous Steele dossier until after the 2016 election. But Ohr’s emails, which have been provided to Congress, show that he and Simpson were in contact as early as August 2016.

Ohr, who was demoted from his position as associate deputy attorney general in December, maintained contact with Steele even after the FBI cut ties with the former MI6 officer over his unauthorized disclosures to the media.

In his interview with House Intelligence Committee investigators, Simpson denied having contact with anyone from the FBI or DOJ regarding the Steele dossier and Trump investigation.

“Did the FBI ever reach out to you or Fusion GPS in relation to the matters that Mr. Steele informed them upon?” House Intel investigators asked Simpson.

“You’ve never heard from anyone in the U.S. government in relation to those matters, either the FBI or the Department of Justice?” investigators asked.

Simpson acknowledged that he had met Ohr through organized crime conferences, but did not disclose that Ohr’s wife was working for Fusion GPS.

“Chris told me that he had been talking to Bruce, that he had told Bruce about what happened, and that Bruce wanted more information and suggested that I speak with Bruce,” Simpson said. “The context of this is that it was after the election. A very surprising thing had happened, which is that Donald Trump had won.” (RELATED: Emails Show Christopher Steele Lobbied DOJ Official On Behalf Of Putin-Linked Oligarch) 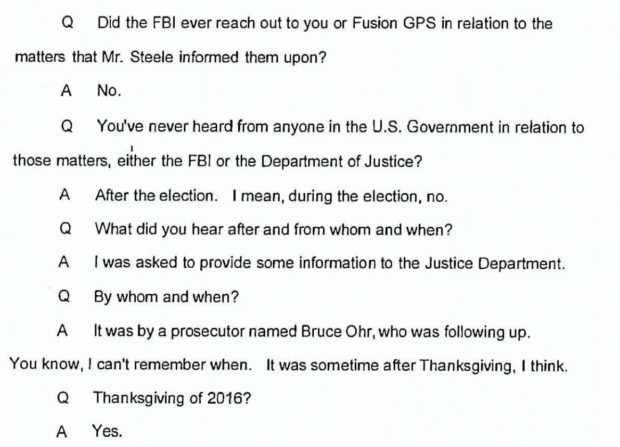 Glenn Simpson’s testimony to the House Permanent Select Committee on Intelligence on Nov. 14, 2017.

The Washington Examiner reported on Wednesday that Simpson sent an email with the subject line “Can u ring” to Ohr on Aug. 22, 2016. Ohr’s log shows he had contact of some sort with Simpson on that day.

One of the intermediaries was a “longtime associate of Trump” who “put together several real estate deals for Russian investigators to purchase Trump properties,” the notes said.

Simpson’s admission that he met Ohr was progress in one regard.

Simpson’s lawyer, Joshua Levy, did not respond to a request for comment for this article.